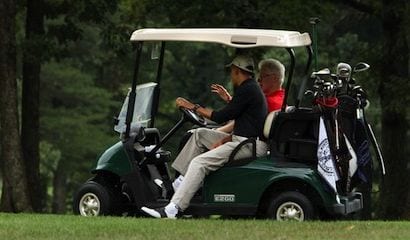 “Ike’s not a communist, he’s a golfer,” said the conservative author Russell Kirk in response to charges that President Eisenhower was soft on the Soviet Union. Were Kirk alive today and saw Obama’s redistributionist economics and underwhelming swing, he might have said that Obama is not a golfer but a communist.

Obama takes his socialism more seriously than his swing, but his taste for the trappings of power doesn’t prevent him from working on it when he gets the chance. His latest golf outing will cost taxpayers almost a million dollars, according to Britain’s Daily Mail.

Obama is adding a new dimension to the picture of limousine liberals: after stoking the flames of class warfare and denouncing the rich in speeches, they climb in their limousines or jets and head to lavish country clubs for rounds of golf.

The Country Club Democrats have come a long way from Jimmy Carter, who insisted on carrying his own suitcase and keeping tabs on the White House tennis court. Obama won’t even carry his own golf bag. Pictures of his overburdened aides dragging golf clubs on to Air Force as he jets off to Florida’s Treasure Coast for a round with Tiger Woods don’t exactly conform to his self-description as the “Middle Class President” and the nostalgic community organizer for the poor.

Not that Obama cares much about such contradictions. Like commissars who read Marx’s books on the class-less society from their sumptuous dachas, Obama figures that he can contemplate the needs of the poor just as well from the Floridian Yacht and Golf Club. As he told Putin’s puppet last year, he was going to enjoy more “flexibility” in his second term.

Obama can count on the press not to care much either. Fresh from his golf trip he arrived back in D.C. to find on Tuesday’s Washington Post a front-page story titled “For second term, idealistic Obama returns,” which suggests the level of hard-nosed reporting he can expect in the coming days.

For all of his emphasis on the value of “empathy,” Obama clearly prefers the company of the rich to the poor, the company of celebrities to members of the middle class. Gone evidently are those feelings of guilt to which he confessed in his memoirs. In Dreams from My Father, he said that one of his first jobs out of college, a job at a Chicago financial-information firm, made him feel like he was “working for the enemy.” He wrote: “Sometimes, coming out of an interview with Japanese financiers or German bond traders, I would catch my reflection in the elevator doors—see myself in a suit and tie, a briefcase in my hand, and for a brief second I would imagine myself as a captain of industry, barking orders, closing the deal, before I remembered who it was that I had told myself I wanted to be and felt pangs of guilt for my lack of resolve.”

If he happened to catch his reflection off the elevator doors of the Floridian Yacht and Golf Club, he would have seen himself standing next to those hated captains of industry, with a scandal-plagued professional golfer in tow.

Obama’s choice of golfing partners makes Bill Clinton’s look circumspect. Last December, Obama played with Bobby Titcomb, a friend from his Hawaiian schooling days who had been picked up in 2011 for soliciting a prostitute. Tiger and Titcomb could compare notes.

Reporters are upset with Obama not for playing golf with Tiger Woods but for not letting them tag along. George W. Bush, before swearing off golf during the Iraq War, would let reporters pepper him with questions between swings, producing one memorable exchange with them after a Middle Eastern suicide bombing: “I call upon all nations to do everything they can to stop these terrorist killers. Thank you. Now watch this drive.”

Clinton also didn’t mind sharing his game with reporters, sauntering back to the press section of Air Force One to inform them of his latest low score, with “no freebies, no second drives, no nothin,’” as he once put it.

These Democratic enemies of plutocracy always seem to end up in Palm Beach playing golf with plutocrats. Clinton famously landed in a Palm Beach hospital after a day of golf and unexplained partying at Greg Norman’s house, at which he stumbled and damaged his knee. Obama’s trip to Palm Beach was less eventful, but another reminder that the class warfare of the Country Club Democrats remains more rhetorical than real.