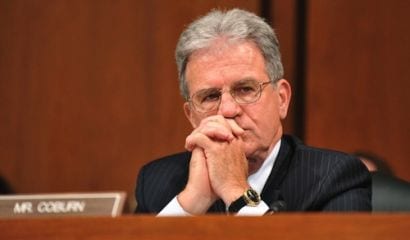 You made them do it. They’re angry about it. And if it happens on Friday, they’ll punish you for it.

That’s the attitude around Washington. The “it” is the sequestration of about $85 billion in federal spending imposed by the 2011 Budget Control Act. The $85 billion in cuts will have to be made in the remaining six months of FY 2013. About half will be cut from the Defense Department, the rest spread among other federal agencies. None of the cuts will affect overseas “contingency operations” such as Afghanistan. And, of course, Social Security, Medicare and Medicaid are exempt from cuts.

Our ravenous government isn’t used to having its constant monetary feeding frenzy interrupted by even a single dollar in reductions. So if sequestration happens, according to several mouths of the many-headed monster Ted Nugent calls “Fedzilla,” we’ll have to wait hours and hours for TSA to spend time in our pants, kids will starve for lack of school lunches, meat shortages will happen because federal inspectors won’t be able to work, FAA air traffic controllers will be laid off, national parks will close, and 800,000 partly-furloughed Pentagon workers will be working French hours.

These are only some of the punishments Fedzilla has in store for us. A hungry monster is not to be trifled with, says the beast and its chef, Mr. Obama. He says you’ll be calling 911 and no help will come because first responders won’t be on the job. (The fact that they are paid by localities, not the feds, doesn’t deter Obama from spinning this tall tale.)

Don’t believe it for a minute. These cuts — except for those in the Pentagon, which I’ve written about many times before — are entirely justified and long overdue. In fact, they’re far too small to have any impact on federal spending and debt. This year, federal spending will amount to about $3.7 trillion, increasing our debt by about half that amount. A reduction of $85 billion amounts to less than three-tenths of one percent of what the government would otherwise spend. Fedzilla spills more than that every week.

I remain opposed to sequestration because of the impact it will have on the defense and intelligence establishments. Half of the total — about $43 billion — will come out of the Pentagon’s hide. Instead of allowing the Pentagon — and the rest of the agencies — to manage their money by moving it between accounts, the Obama-congressional sequestration mandates cuts across the board. Because of this, major weapon system contracts will be cut back or canceled, the flow of new technologies defense depends on will be interrupted, and the resulting mess will end up costing taxpayers more in the long run for what could and should be bought now. And the stuff that shouldn’t be bought at all — e.g., Navy Secretary Ray Mabus’s incredibly wasteful “green energy” program that pays hundreds of dollars for a gallon of algae-based fuel instead of regular diesel fuel that could be bought for $3.20 a gallon — will continue to be bought but at even higher prices.

Sequestration prevents money management and Congress isn’t going to fix that before Friday. Obama wants the pain to be felt so that spending can be restored. The only thing we can predict is that as soon as sequestration happens, Congress will remain in crisis mode trying to fix sequestration so that the pain is reduced.

The only way Obama will allow that to happen is if spending is restored, minuscule cuts are imposed, and taxes are increased again. The “balanced” approach he preaches is nothing of the sort. When Obama says “balanced,” he means that more spending is paid for by higher taxes. He won’t agree to spending cuts, so the only way Congress can fix the problems created by sequestration is for Republicans to surrender — again — on taxes and spending.

That, at least, is the current political wisdom. And it’s wrong. If congressional Republicans try to fix the sequestration problem now, they’ll lose the battle because they gave away their leverage in January.

Last month, congressional Republicans kicked the federal spending problem down the road until May, foregoing the debt ceiling debate they should have insisted on. That means the sequestration problem shouldn’t be dealt with until then, when they regain their leverage.

It also means that they have more than two months to revise the deeply-embedded political equation.

In the big debt ceiling “crisis” of 2011, Republicans played Obama’s game, talking only about overall budget numbers rather than focusing on the individual agencies and the wasteful programs that they administer. By not focusing on the individual agencies’ wasteful programs, and by not speaking the truth on the necessity of entitlement reform, Republicans were trapped on the wrong side of both parts of the spending question.

No one who has any knowledge of the federal debt crisis can dispute that the main drivers of our fiscal crisis are Social Security, Medicare, and Medicaid. Between now and May, there’s no possibility of repositioning the electorate in favor of entitlement reform.

As Ronald Reagan said, a rising economic tide lifts us all. But our economy is shrinking again. GDP shrank by 0.1 percent in the last quarter of 2012. If we have another quarter of shrinkage, economists will proclaim that we’re back in a recession. The current wisdom says that the only way to prevent that is for government spending to increase. That is false: growth comes from the private sector, not the government. The more government taxes, regulates, and spends, the less growth there will be.

There’s a huge amount of non-entitlement spending that could and should be cut in May. It’s on these programs that Republicans should focus in the next two months.

Right now, Republicans are still playing Obama’s game. They’re talking about immigration reform and gun control. Some reports indicate that deals are being made on both. No deals should be made. It’s time to stop the train and get real spending cuts across the board. There’s even a blueprint for it. Sen. Tom Coburn (R-OK) published his “Back in Black” plan during the 2011 debt ceiling debate.

Coburn’s plan would eliminate duplicative government programs, cut spending, and reform entitlements in a way that would save about $9 trillion over the next decade.

To set up the May debate, Republicans should embrace Coburn’s plan and make it their unflinching position. Why not make the elimination of duplicative programs a starting point from which they wouldn’t budge? But don’t stop there. For every duplicative program, there’s another ten programs that do things the federal government has no constitutional mandate to do. And then there’s the waste. How much money is being poured into anti-global warming nonsense like wind and solar energy that aren’t economically feasible? Why not eliminate failed programs that continue because no one has had the courage to try to shut them down?

As to the entitlement programs, why can’t the Republicans say that at some point soon — be it in two years or twenty — Social Security, Medicare, and Medicaid won’t be able to pay out their benefits because there won’t be enough money coming in to sustain them? Some people won’t care because they believe taxes can always rise to satiate Fedzilla. But the truth — if it’s relentlessly presented — will eventually sink in.

When they kicked the can down the road last month, Republicans insisted that the Senate produce a budget to be negotiated with the House. It won’t matter whether the Senate does or not, because the only penalty for not having a Senate-passed budget is supposed to be an end to congressional salary payments, which, under the 27thth Amendment, is unconstitutional.

Republicans don’t need more “summit” meetings with Obama. They don’t need more debates on taxes. What they need is the courage to stop the gravy train. Unless and until they bring about a government shutdown over spending, they can’t win any of these debates. And they won’t because they lack the courage to risk a shutdown.

At this point, congressional Republicans are irrelevant to the debate. To regain any influence, they have to take the risks inherent in a shutdown.