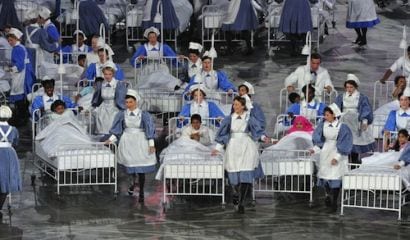 An excruciating irony of Obamacare is that its architects modeled many of its features after the UK’s National Health Service (NHS). The NHS is a classic system of socialized medicine, and a monumental failure by any objective standard. Yet many of its features were enthusiastically built into the “Affordable Care Act.” The most obvious example is Obamacare’s rationing committee, the Independent Payment Advisory Board (IPAB), which was consciously made in the image of Great Britain’s National Institute for Health and Clinical Excellence (NICE).

And lest you think I exaggerate the failures of the NHS, you can verify my characterization by reading or watching the countless news stories and documentaries that reveal a standard of care that is nothing short of scandalous. Routine neglect of elderly patients, cancer patients writhing in agony because their pain medications were not administered, clinicians eating patient food while patients starve, nurses ignoring patients desperate to use the toilet—all are commonplace. Indeed, neglect at one NHS hospital caused no fewer than 1,200 deaths.

It hardly needs to be said that ordinary Britons and a variety of patient advocacy groups are worried that such episodes will continue if drastic changes are not made at the NHS. And, ironically, the most successful of the “drastic” experiments put in place is that much-hated bête noire of progressives and Obamacare supporters everywhere: privatization. The Mail Online reports that Hinchingbrooke Hospital, “The first NHS trust to be operated entirely by a private company has recorded one of the highest levels of patient satisfaction in the country.”

In other words, the Brits were so desperate to fix their crumbling health care system, they experimented with the private market and it is outperforming government-run health care without breaking a sweat. Hinchingbrooke was, like so many hospitals in the UK, about to go under when a private company called Circle Holdings was awarded a 10-year contract to run it. This is the first time such a company has been given control of an NHS hospital and the results will not come as a surprise to anyone who understands free enterprise.

As the Mail Online goes on to report, “The company running the trust has slashed losses at the hospital by 60 per cent and will soon begin to pay… debts built up over years of mismanagement.” Though will be no surprise to free market advocates, it has been a real eye-opener to the NHS. Privatization isn’t the dirty word it once was in the much-maligned health system: “The takeover deal … is seen as a blueprint for the future of many NHS trusts. The George Eliot Hospital in Warwickshire is already considering adopting the model.”

It will also come as no surprise to those who believe the market provides the most efficient health care delivery model that, in addition to dramatically improving the financial prospects, privatization has improved patient satisfaction. Before Hinchingbrooke was taken over by Circle Holdings, patients had a very low opinion of the hospital and the care it provided. Now, this perception is dramatically improved: “Patient satisfaction has risen to 85 per cent, placing Hinchingbrooke in the top six of the East of England’s 46 hospitals.”

Not everyone is happy with the changes privatization has wrought, however. The people who work at the hospital are apparently unenthusiastic about the necessity of putting the wellbeing of the patients first: “Staff satisfaction at Hinchingbrooke Hospital has fallen since Circle took over, the latest NHS Staff Survey has shown.” Presumably, the hospital staff would like to continue ignoring the needs of the patients: eating their food, taking their medications and allowing them to die because it’s just too much work to do their jobs.

But the socialized model just doesn’t work. It doesn’t matter that NHS staff are disgruntled or that the erstwhile administrator of the Centers for Medicare & Medicaid Services (CMS) was “romantic about the National Health Service.”Nor does it matter that all of the architects of Obamacare hold similarly romantic views about government-run health care. The NHS, as we know it, came into being shortly after World War II. They have had well over 60 years to prove that socialized medicine works, and they have shown precisely the opposite.

Yet, in less than two years, a private firm has taken a government-run hospital on the verge of bankruptcy and turned it around: Hinchingbrooke has gone from being one of the worst hospitals in the NHS to one of the best. It is infinitely better off financially and the patients give it high satisfaction marks instead of living in fear that they might get sick and be admitted there. Moreover, the hospital is meeting benchmarks on waiting times that most NHS hospitals can only dream of reaching and patients — particularly those with cancer — are getting better care.

Meanwhile, we in the United States are dismantling the remaining free market features of our medical delivery system and replacing them with the very bureaucratic trappings that Circle Holdings removed in order to save Hinchingbrooke. We are implementing Obamacare when the UK has shown that government-run health care does not work and is beginning to move away from it. What is wrong with this picture?