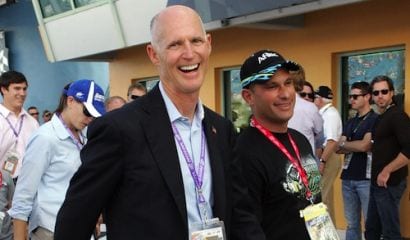 On Fox News’ “Special Report” columnist Charles Krauthammer said it was “honorable” for Florida Governor Rick Scott to recommend the state buy into the Obama health law’s Medicaid expansion, despite Scott’s earlier opposition. In truth Scott’s decision is venal and short sighted. If the Florida legislature agrees to expand Medicaid, it will doom Florida to bankruptcy and Floridians to enormous state tax hikes in the coming years. The expansion will add 42% to the state’s Medicaid enrollment.

Packing the Medicaid rolls is Obamacare’s primary way of dealing with the uninsured. The law lays out a red carpet for politicians to expand their state’s Medicaid programs, adding richer benefits and many more enrollees. The health law promises the federal government will pay 100% of the cost of the expansion until 2018, and then 90% of the cost thereafter. That’s a 9-to-1 match.

In the past, states have set eligibility rules based on what state budgets can handle. This expansion puts the feds in control, and it’s way beyond what states can afford.

That’s why this red carpet invitation is a trap. The federal government usually breaks its promises. What will happen then? It’s inconceivable that states will be able to undo the expansion and reduce the burden. Taking back entitlements is generally a political impossibility. Instead state taxpayers will be clobbered with huge new bills.

Despite this obvious peril, the red-carpet invitation has enticed even such conservative governors as John Kasich of Ohio and Jan Brewer of Arizona, an outspoken critic of President Obama and his health plan.

Earlier this month, both governors stunned the nation by announcing that they will participate in Obamacare’s Medicaid expansion. Brewer said it would “inject $2 billion” into the state’s economy.

Brewer’s statement is typical of what politicians have done in the past. To most politicians, Medicaid is a verb. It means spend, spend, spend and then bill the federal government for part of the tab. In the past, that corrupt thinking led state politicians from both parties to spend excessively as a way of doing exactly what Brewer said, bring federal dollars into their state. The incentive then was the federal government matching spending 1 to 1. Imagine how much more wasteful Medicaid spending will be when the reward is 9 to 1. Watch as these politicians Medicaid everything in sight.

Not all governors are hurrying to the party. Wisely, 13 have refused and another 14 are reserving decisions. Kudos to the holdouts, including Texas Governor Rick Perry. Accepting the invitation would expand Medicaid enrollment 57% in Texas.

Every deficit reduction plan being discussed in Washington, D.C. includes abandoning that 9-to-1 match soon, the Task Force warned. States that expanded Medicaid to comply with the Obama health law will be plunged into fiscal disaster.

Medicaid is already consuming a third or more of many state budgets. States would literally have to stop funding roads, public schools, and other essential services to pay for Medicaid.

Counting on venality to triumph over wisdom, President Obama is assuming most governors —Republicans as well as Democrats — will ignore this danger and opt for the Medicaid expansion.

If more governors capitulate, another health program will fall entirely under federal control, state politicians will be tethered to the president and his minions in the Medicaid bureaucracy, and taxpayers’ dollars will be lavished on anything politicians can Medicaid. That’s a verb, you know.