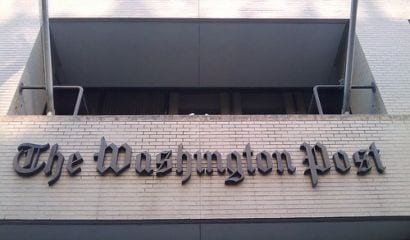 Last Sunday, the Washington Post’s ombudsman casually revealed that the official policy of reporters at the paper is to treat opponents of gay marriage as the moral equivalent of racists.

Addressing the complaint that the paper is a propaganda sheet for gay activists, ombudsman Patrick Pexton disclosed an e-mail exchange between a reader and a Post reporter. The reader had asked the reporter why the paper covers the gay marriage debate so one-sidedly.

“The reason that legitimate media outlets routinely cover gays is because it is the civil rights issue of our time. Journalism, at its core, is about justice and fairness, and that’s the ‘view of the world’ that we espouse; therefore, journalists are going to cover the segment of society that is still not treated equally under the law,” responded the reporter.

In other words, reporters don’t cover debates but decide them. On the basis of their notions of “justice and fairness,” they tailor all coverage and determine in advance the winners of debates. This admission—that there is no difference between the paper’s front page and editorial page—would have been bad enough on its own. But then the reporter dug the hole deeper by telling the reader that opponents of gay marriage are no more legitimate than segregationists: “As for accuracy, should the media make room for racists, i.e. those people who believe that black people shouldn’t marry white people? Any story on African-Americans wouldn’t be wholly accurate without the opinion of a racist, right?”

Pexton seemed only mildly concerned by this reporter’s bald advocacy. He tried to explain it sympathetically (while hoping for more “detachment and objectivity”), but ended up just reiterating that reporters see traditional Christians as modern-day racists: “They see people opposed to gay rights today as cousins, perhaps distant cousins, of people in the 1950s and 1960s who, citing God and the Bible, opposed black people sitting in the bus seat, or dining at the lunch counter, of their choosing.”

That a major American newspaper likens Christians to racists would once have generated outrage. Now it inspires little more than a shrug. The paper’s outnumbered ombudsman blandly notes it, wishes for a little more “objectivity,” and then moves on.

The bias has never been more open and unapologetic, and yet a supposedly serious figure like NBC’s Chuck Todd can say with a straight face, as he did last week, that its existence is “mythology.”

Operating under its typical bias, the Post got excited this week at the news that Keith O’Brien, a Scottish cardinal accused of misconduct, had resigned his office and bowed out of the upcoming conclave. The story received above-the-fold treatment and was shoehorned into familiar liberal categories.

“O’Brien, one of the church’s most strident voices against homosexuality, abruptly stepped down amid allegations of ‘intimate’ acts with priests,” said the story. That line conforms to the paper’s preconceptions nicely. The only problem is that it is not true. Had the reporter done even a minimal amount of research, he would have known that O’Brien is not one of the “church’s most strident voices against homosexuality” but a supporter of gay teachers in Catholic schools. “If there happens to be a gay teacher and he does happen to be living with a partner, that’s their personal, private life. I don’t see it as a problem,” said O’Brien in 2005. Does that sound like a strident voice against homosexuality? It sounds like the voice of a permissive post-Vatican II bishop.

To report the story in those terms would have undercut the “hypocrisy” angle. So the reporter, if he did know about those remarks, made sure not to let them complicate his story. Only late in the piece does the reporter acknowledge that “his positions were not always easy to define,” breezily noting his comment last week in favor of relaxing clerical celibacy. In paragraph two, he was presented as a bastion of conservatism. By the end of the piece, we find out that he doesn’t even support priestly celibacy.

The real story is not conservative hypocrisy but liberal decay in the Church. It could have just as easily been titled “Opponent of Clerical Celibacy Quits in Homosexual Scandal.” But reporters at the Post know not to pursue such an ideologically inconvenient angle. That doesn’t comport with their “view of the world.”