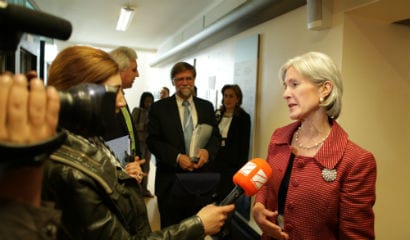 In the fight over Obamacare, one of the hottest points of contention has been the Independent Payment Advisory Board (IPAB), an unelected body with powers so broad that it has been called a “super-legislature” by some, and a potential “death panel” by others. Major policies set by the IPAB will have the force of law unless they are explicitly blocked by Congress. The usual order, of course, is that Congress is supposed to make the laws and bureaucrats are supposed to follow them.

Another nasty ingredient in the alphabet soup of Obamacare is the United States Preventive Services Task Force (USPSTF). This is “an independent group of national experts in prevention and evidence-based medicine.” Formerly a sleepy quasi-governmental body charged with making recommendations about public health screening, under Obamacare the USPSTF will determine whether your doctor will be able to diagnose you with diseases.

The USPSTF first made headlines in 2009 when it encouraged women under the age of 50 to forgo mammogram screening for breast cancer. Only after an outcry from women’s and cancer advocacy groups did Health and Human Services Secretary Kathleen Sebelius beat a hasty retreat, distancing her department from the USPSTF recommendations.

More recently, the USPSTF advised against use of the prostate specific antigen (PSA) test. The routine screening of all men over the age of 50 via PSA testing was originally thought to have revolutionized the detection and treatment of prostate cancer. Prior to the development of this test, prostate cancer was almost always detected after it had already spread–too late to do anything other than manage the pain and complications it causes. The medical community understandably embraced PSA testing, which allowed the disease to be detected in its early stages.

An unqualified success story? Hardly. PSA testing detected far more cases of prostate cancer than had been seen before. Many men suddenly being diagnosed with (and treated for) prostate cancer would, prior to PSA testing, have died of other causes, blissfully unaware that they had cancer. The question, though, has been this: Who benefits from early treatment, and who is better off left alone? Early on, there was no way of knowing, so to be on the safe side, nearly all cases were treated–which meant that some men suffered complications from treatments that they didn’t need. About that, the USPSTF isn’t wrong.

Money also entered the picture. A damning article in the Wall Street Journal in 2010 revealed that some large urology groups were setting up lucrative radiation treatment centers to which they referred nearly all their patients. All this at a time when responsible urologists were developing and following observation protocols to monitor the severity of the disease, only stepping in to treat in those cases that showed signs of starting to advance.

What does all of this have to do with the USPSTF? A blanket declaration that primary care providers shouldn’t screen for a particular disease tells patients that they are really better off not knowing whether they have it or not. If you do happen to be the unlucky bloke whose lethal cancer could have been prevented by early detection, well, that’s tough luck.

You’re probably wondering whether, under Obamacare, the USPSTF’s recommendations are binding. The answer is yes and no. Medicare and other insurers are required to provide treatments or services given an “A” or “B” grade without cost to the patient. The law is silent when it comes to services with grades of “C” or “D,” which explains why Kathleen Sebelius got away with backpedaling on the USPSTF’s mammography guidelines in 2009, saying that they were “just recommendations.” For the moment, Medicare still pays for an annual PSA screening.

But technocrats of the future might well offer a radically different interpretation of the law’s silence. For instance, as “pay for performance” measures are introduced, there may be negative ramifications for doctors who frequently order tests assigned a “C” or “D” grade.

The USPSTF includes the requisite disclaimers, including the caveat that doctors should exercise judgment and discuss the pros and cons of various tests with their patients. This seems reasonable, but the reality is that few non-specialists have either the knowledge or the time for such discussions. As Obamacare takes effect and physicians come under increasing scrutinty for their adherence to official protocols (set, of course, by panels like the USPSTF), even this level of individual judgment may drop by the wayside.

About individual judgment: When President Obama had his physical last year, he made an “informed patient request.” Guess what it was? Yes, indeed…he was screened for prostate cancer with a PSA test, in spite of the fact that the USPSTF’s recently published (and well-publicized) draft recommendation statement recommended against it. The President’s physicians were fully aware of this recommendation, which is why the weasel words of “informed patient request” were used. You see, a busy president had done his homework and decided on his own to request a PSA test. He apparently went through with it even after his own government agencies advised him that the test was worthless. Right.

Legislation was introduced last year to reform this task force. The USPSTF Transparency and Accountability Act would have brought some balance to the panel. Among other things, the act would have required knowledgeable specialists to be present on the task force. At present, the USPSTF is making decisions without any input either from specialists who work with these diseases on a daily basis or from patient advocacy groups. The act would would have also made the process by which task force members are appointed more transparent. (Currently they are chosen by an agency head who is in turn appointed by the HHS Secretary.) But most importantly, the bill would have prevented Medicare from denying coverage for medical tests based on the USPSTF’s opinions. Unfortunately, with Democrats still in control of both the White House and the Senate, the chances a bill like this will see the light of day are slim.

The take-home point is not about prostate cancer or PSA testing. We should certainly hope that medical science will continue to refine the answers to questions about exactly who needs a given test or a given treatment. We should hope that better tests and less invasive treatments will be developed. In a few decades we will look back on current medical practices and shake our heads, just as medical professionals now look back with disbelief at things that were done routinely in the 1960s.

The point isn’t even about the questionable medical judgment of the USPSTF. Rather, it is that we are only beginning to discover the implications of Obamacare, under which unelected boards like the IPAB and the USPSTF will have the unprecedented power to dictate what were once doctor-patient decisions. Nancy Pelosi famously said that we would just have to pass the Obamacare bill in order to find out what was in it. About that, she wasn’t lying.