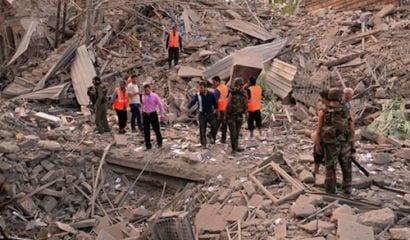 There is no question that the Syrian government of Bashar al-Assad has been strongly supported by its formal Russian alliance. Not only has the steadfastness of the entente been manifested by regular supplies of war materials, but perhaps as important has been the political encouragement that the Kremlin has offered. This public alignment at the UN has given credence to the internationalization of the civil conflict.

China has maintained its commitment to the Assad regime and Iran has positively reveled in its self-assumed role as “protector of established government.” Only recently has it been reported that the friendly government of Russia has made an effort to nudge Bashar al Assad to seek a safe haven while developing negotiations for a solution to the ongoing chaos. At the same time, however, there is the countervailing influence of Lebanon’s Hezbollah backed by their Iranian patron urging continuing battle. These important Shia brethren appear to be willing to do everything they can to maintain the Assad regime in power.

In specific terms, reports have indicated that battle-tested Hezbollah personnel have trained Syrian troops in urban fighting techniques, as well as organized the former crime gang and pro-regime Shabiha militia into what has been termed “an effective paramilitary force.” From the standpoint of the Free Syrian Army (FSA), the Hezbollah fighters are “mercenaries” and are to be treated as such.

Five miles north of the border of Lebanon near the Syrian town of Qusayr is a group of Shia-dominated villages that have been the target of FSA rebel forces. Hezbollah fighters have defended these areas and now have introduced rocket bombardments to assist in these efforts. The rebels view this escalation as an expansion of outside military participation beyond existing Hezbollah aid to regime units and have said this justifies their call for foreign intervention.

Lebanese Sunnis have rallied to counter the participation of the Shia of Hezbollah. In spite of the urgings of Lebanese Christians that any and all of their Moslem countrymen stay out of the Syrian conflict, Maronite Christians of the Franjieh clan have continued their alliance with the Assad family’s Alawite sectarian connection. Interestingly, while not becoming directly involved in the conflict, the Kurdish population of northeast Syria — aided by Iraq Kurdistan and the paramilitary abilities of the PKK — have utilized the civil war to secure greater autonomy.

Conspicuous by their absence, however, is the United States and the European Union who had loudly proclaimed their political support for the National Coalition formed several months ago to represent the Syrian people. The rebel forces expected to have the Western rhetoric backed up with arms and equipment. Anti-aircraft and anti-tank weapons were emphasized as needed to match the regime’s technical superiority. Covert European and American field operatives in liaison with various rebel groupings have found themselves politically undercut by the lack of any supply of advanced military equipment.

An ancillary effect of the inability of the military wing of the National Coalition to gain stronger materiel support from the West is their consequent inability to attract and retain fomer regime military personnel. The principal sources of aid to the rebel movement have come from Saudi Arabia and Qatar, but this aid has been short on the heavy military equipment desired. This aid tends to favor the jihadists who have good contacts with Saudi intelligence and the Syrian wing of the Moslem Brotherhood who get most of the Qatari support.

A group of about 75 Chechnyan fighters have made their way to Syria, but aside from their availability for photo ops, these ferocious-looking veterans don’t seem to be quite sure for whom they are supposed to fight. Military attachés in Beirut have simply included these Chechnyans in their lists of generally available jihadist mercenaries. The Saudis and Qataris act as if they never heard of Chechnya.

The Russians and Iranians have no trouble in identifying those portions of the Assad military machine they aim to supply with arms and equipment. President Bashar al-Assad’s relatives and close Alawite associates direct his most dependable battalions and they are the ones that can expect first call on the military assistance being supplied by Moscow and Tehran. Fuel and ammunition flows through the Russian-protected Syrian ports. Tehran’s political operatives keep an eye on the interests of the loyal Shia minority.

While some of the Alawite leaders admit their patience has been sorely tested by the regime’s inability to overcome the Sunni-led opposition, Syria is dividing into special interests of local warlords, jihadists of varying stripes, and just plain turf-controlling armed partisans. It’s not an environment that encourages support for democratic principles.

The reality is that the late Hafez al-Assad held the country together through the allegiance of his relatives and friends of the Alawite sect, the secular strength of the Baath Party, and the careful distribution of privilege throughout the country regardless of religious or ethnic orientation. It was a balancing act that was reinforced by an intricate security system. This entire political structure has been irreparably fractured.