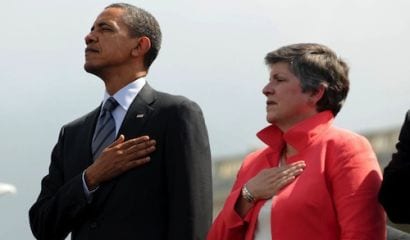 Because the word “sequester” sounds more like a bronchial infection than a governmental disaster, President Obama failed to terrorize House Republicans into raising taxes in order to avoid it.

They tried everything they could think of to scare us. We’d have meat shortages because federal inspectors would be laid off, long lines at airport security stations would get longer because the TSA molesters would be cut back. Education Secretary Arne Duncan earned four “Pinocchios” from the Washington Post’s Fact Checker column for brazenly lying about teachers he said were already being laid off in West Virginia.

Duncan, for all his faults, is relatively harmless. The same cannot be said about Homeland Security Secretary Janet Napolitano, whose department has begun releasing criminal illegal aliens — which for this discussion is not redundant — from the jails where they were being held pending deportation. Even before Friday, when the $85 billion in cuts took effect, Napolitano’s Immigration and Customs Enforcement began releasing criminal illegal aliens among the public.

It’s the Obama administration’s “sequester amnesty,” which endangers the public to make a political point.

Pinal County, Arizona, is about seventy miles from the Mexican border. It’s larger than Connecticut, running south and east from the city of Mesa. Its sheriff, Paul Babeu, is a tough guy in a very tough place. And both his job and his county are made a lot tougher by ICE’s release of an unknown number of these criminal illegals, people who were held pending deportation because their criminal records made them “inadmissible” into the United States.

Arizona is high on Obama’s list of enemies. It’s the state Obama’s Justice Department sued to set aside the state law that enables the arrest and detention of illegal aliens. The Supreme Court struck down part of the law, but left in place the part that allows state law enforcement officers to check the immigration status of people they’ve stopped for other reasons.

Obama’s position is that federal law preempts any state law to control illegal immigration and any state action for which the state lacks federal permission is impermissible.

Sheriff Paul Babeu of Pinal County, Arizona, is trying to deal with that one-way street. I interviewed him on the Roger Hedgecock radio show last Thursday. What Sheriff Babeu told me is shocking. It confirms that our government is now willing to endanger public safety to prove a political point.

In December 2012, Homeland Security’s Immigration and Customs Enforcement agency had more than 33,000 illegal aliens in custody pending deportation. These aren’t people who were arrested just because they were illegal aliens. They are criminals, held by ICE because they were convicted of separate crimes, usually serious felonies, and held after they’d served their sentences until they could be deported. Others have long criminal records in their own countries who came here to do more of what they did at home.

Federal law allows these people to be held for up to six months pending deportation. Some, from nations such as Pakistan, are held for that long — and should be held longer – because their country of origin won’t issue travel documents enabling their return. The non-cooperating nations are content to leave their problems with us, be they terrorists or drug traffickers.

The federal government says there are 11 to 12 million illegals in the United States. Sheriff Babeu told me that 300-500 of the 34,000 criminal illegals held in pre-deportation detention were released into his county two weekends ago.

Janet Napolitano said that ICE won’t be able to maintain 34,000 criminal illegals in custody — not because of legal limitations on incarceration, but because of the sequester. In a statement to the press last week, she said, “Look, we’re doing our very best to minimize the impacts of sequester. But there’s only so much I can do,” Napolitano said. “I’m supposed to have 34,000 detention beds for immigration. How do I pay for those? We want to maintain 22,000-some odd Border Patrol agents. I got to be able to pay their salaries.”

Babeu told me that neither he nor the county’s police chiefs were given notice of the release. “The doors swung open and there they go,” he said.

I asked Babeu if he even knew who these people were. He said that he’s asked for that information numerous times, including by letter, and ICE has refused to tell him. “These people were released into the community. We don’t know their names, we don’t know what charges they were held on or their criminal history.” He added, “But we do know this: this is the same group that Janet Napolitano and Barack Obama have all agreed that these are the worst of the illegals.”

ICE is saying that some of these illegals were released on terms that supposedly provide some supervision. Sheriff Babeu is, to say the least, skeptical.

“They’re saying that they’re going to put them on supervised release, meaning some of them wear an ankle bracelet or they have to check in with authorities. Are you kidding me? These people have broken the law countless times and now they’ve got their chance. They’re out of prison.”

He added, “There’s no incentive for them to report in because what’s the worst thing we can do to them? Deport them?”

Sheriff Babeu apparently learned from ICE and Border Patrol agents who called him unofficially. He said, “Good people who work for ICE, work for Border Patrol, they call me all the time.…They said, ‘Sheriff, help us. We’re releasing all these criminals. This order just came down from Washington and now they’re all out in the streets.”

Which streets? It’s improbable that Pinal County is the only place where criminal illegals are being set free. He’s asked about that, too, and the federal bureaucrats won’t tell him.

So we don’t know how many criminal illegal aliens — criminals because they’ve committed serious crimes other than illegally entering the United States — are being set free around the country. According to an Associated Press report, Homeland Security has released over 2,000 of these dangerous illegals since February. Of the 34,000 held by ICE in December, how many more will be turned loose to endanger the American people, because the Obama regime wants to punish us for the sequestration of $85 billion out of the nearly $4 trillion the government will spend this year?

The release of criminal illegal aliens is probably illegal itself. Under our muddled immigration law, Napolitano has the authority to release illegal aliens individually when her department determines that they pose no danger to public safety. But mass releases, such as the one into Pinal County, are beyond her power.

The only answer to this is for Sheriff Babeu — perhaps joined by other concerned law enforcement officers around the country — to sue Napolitano to stop the releases. That lawsuit would reveal who the illegals are, what crimes they’ve committed before, and just who within ICE, the Justice Department, Homeland Security, or possibly the White House ordered the releases.

Congress won’t find the answers to these questions no matter how hard it tries. The House subpoena on “Fast and Furious” was blocked by Obama’s claim of executive privilege when Congress held Attorney General Holder in contempt. The Benghazi investigation is still incomplete, the survivors of the terrorist attack on our diplomatic outpost held — or, more technically, sequestered — out of congressional investigators’ reach.

The only answer is “sue the bastards.” Get a federal judge to issue an injunction against further releases and to compel answers to Babeu’s questions. He, and the rest of the law enforcement community, are entitled to know who was released, what crimes they had committed before, and where these people were when last seen. They have to know these things if they’re going to do their duty to protect their communities.

Gene Sperling, Obama’s top economic adviser, was wandering around the Sunday talk shows blaming Republicans for the sequester. He said Republicans are to blame for all the harm that results from the sequester. After Napolitano’s release of criminals from ICE incarceration, that’s a bolder lie than Arne Duncan’s.

We are living in an era of government lawlessness that is unprecedented in our history. Obama and his minions will do whatever they like, whenever they can, to make political points. In this case, only the courts can stop them.