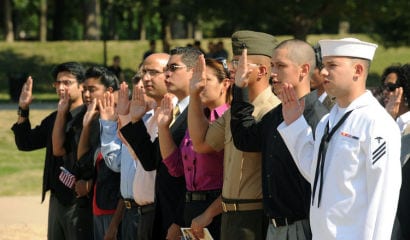 It is finally dawning on Republicans that they have the opportunity to be the pro-immigration party. It took losing the 2012 presidential election thanks in large part to overwhelming Hispanic and Asian-American support for President Obama, but Republicans are now beginning to understand that immigration reform is a key part of an economic-growth agenda. And we need growth to get us out of our economic hole.

Years of intense focus on securing the U.S. border with Mexico have given the impression that there is a stark contrast between Republicans and Democrats on immigration policy. In reality, the Republican and Democratic positions on immigration are remarkably aligned. Both favor highly skilled immigration and don’t want to penalize those who came here as children and see the U.S. as home. They favor penalties on businesses that hire non-documented workers, and they want border security. Finally, they want to provide the opportunity to stay in America to those who came here illegally but are English-speaking, productive contributors to society.

A comprehensive immigration effort is unfolding, and we will see how the parties resolve their disagreements. Responsible Americans realize our nation’s economy has a real problem that must be solved. For Republicans who see an opportunity to solve the problem and become the party embracing immigration, I suggest the following:

1. Humanize immigrants every time you speak. Immigrants are humans. One should never call them “illegals” or “aliens.” Doing so has created deep wounds that now must be healed. Immigrants simply want what we all want: a better life for ourselves and our children.

2. Focus on attracting the best and brightest. For the sake of the economy, we must implement an immigration system that attracts and keeps the world’s best and brightest scientists, technologists, engineers and mathematicians – these are the ninja innovators who will create products, brands, companies and jobs that will lead us back to prosperity.

3. Don’t make amnesty the issue. The word “amnesty” and even the phrase “path to citizenship” are the proposals dividing the nation and likely to doom passage of comprehensive immigration legislation. Those opposing it insist that those who came here as illegal adults should go to the “back of the line.” The problem is that the line is already full of relatives of existing citizens and immigrants from China, Mexico and India who will have to wait several years under the present law. More, there are paths to citizenship under present law for illegal immigrants including service in our military and marriage. My suggestion is to allow the 11 million people here illegally to stay here, provided they register within a year and do not commit crimes. Anyone not registered after a year can and should be expelled. Once here legally, they could then apply for citizenship.

4. Be careful about pushing for a national ID card. This solution will unwind any proposal as civil rights groups, privacy advocates and constitutional scholars may oppose anything that smells of a system encouraging people to be stopped and asked to show their paperwork. Today, unless flying, driving or entering a government or private building, Americans have no ID requirement and proposing a law requiring an ID card will doom a bill.

5. Put the burden on employers and government giving benefits. Before any American receives a job or government benefit, they should be required to prove they are here legally. Giving a job or benefits to those here illegally should have consequences.

We need to address our immigration issue in a positive way so our nation can grow and benefit from the best and the brightest. Immigration is a huge opportunity for Republicans to define themselves as for something consistent with Republican values and good for our nation.