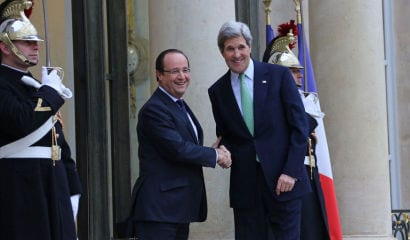 Former Senator John Kerry has a long-standing reputation as someone lacking an ear for the minor key. He seems to be tone-deaf, not a good thing in the vicar of American foreign policy. In his abortive run for president in 2004, it was the little things: wife Teresa, the wealthy widow of Heinz ketchup heir John Heinz made it clear she wasn’t going to adjust her extravagant lifestyle whether her new husband got elected or not. The photo of candidate Kerry taking a break from his campaign to go windsurfing off the Massachusetts coast left Joe Sixpack perplexed. And asking for Swiss cheese on his Philly cheesesteak probably lost him at least the eastern half of Pennsylvania.

Kerry has long coveted the job of Secretary of State, and now he has it. Unfortunately, he got it on the heels of Hillary Clinton, who had already set a clear course for the nation’s foreign policy, a course designed in concert with the Obama White House. That course was signaled by her inaugural visits to the Pacific Rim nations of Japan, South Korea, Indonesia, and China itself. Now Secretary Kerry, on his inaugural foreign junket, has not only turned his back on the Pacific Rim in favor of hugging fractious Europe and jumping back into the Middle East quagmire, but counseled his European audiences not to put too much stock in the Pacific focus, cf. “you know — people called it the pivot, right?”

Policy analysts in other nations spend their lives poring over every statement, every bit of minutiae that may signal the intentions of the United States. Policy analysts in the United States do the same with other great powers: during the Cold War, the term “Kremlinologist” came into vogue as a short-hand description of those who tried to read the intentions of the Soviet leadership. Today, Kremlinology has been replaced by Sinology, as our analysts assess every phrase of every statement uttered by every Chinese official of any stature whatsoever.

Consistency in foreign policy is not simply a virtue; it is a vital component of the national security. Inconsistency in this realm is jarring to others; it troubles the defense establishments of those nations that see the United States as a real or potential adversary. It raises the risk of miscalculation in foreign capitals.[1] It offers the prospect of confrontation.

So, it is a real question why Secretary Kerry is pirouetting around Europe, speaking derisively of the policy of paying greater attention to our interests in the Pacific, and dropping in first on the British Prime Minister at Number 10 Downing Street. Is our relationship with England that shaky? Are there matters engaging France or Germany that can’t be managed by our ambassadors in those capitals? Kerry was raised in Europe, the son of a diplomat, schooled in Switzerland, speaks French and German, and apparently some Italian — which may go far toward explaining those stops on his itinerary.

But they don’t go far toward explaining the downgrading of the Pacific Rim. Here, U.S. allies are saber-rattling over claims to islands and their resources in claimed territorial waters. China is in a parlous state as it changes heads of government, and seeks to bring its military power in line with its economic power. North Korea is pressing on with refining its nuclear capability while developing the means to deliver it not merely regionally but globally. And our Eurocentric Secretary of State is taking tea with David Cameron. What is China’s Xi Jinping to make of it? What is Vladimir Putin to think?

But the Secretary’s journey is not restricted to Europe. Turkey, Egypt, Saudi Arabia, Abu Dhabi, and Qatar are also on his itinerary. It is difficult to overstate the importance of Turkey to the NATO Alliance, although Washington, D.C. seems sometimes to forget the fact that Turkey is a NATO ally. Kerry took the opportunity of his stop in Ankara to lecture Prime Minister Erdogan on the latter’s equation of anti-Muslim bias with Zionism and anti-Semitism. It was the reference to Zionism that raised hackles in Israel, which responded accordingly. Kerry’s rebuke contributed nothing constructive to his talks in Ankara, nor to relations between the U.S. and Turkey nor, for that matter, to relations between Turkey and Israel. So, what was the point?

Finally, Kerry seems bent on intervening in Syria, a position he does share with his predecessor, Mrs. Clinton, who also felt the need to leap into the mess in Syria. The White House did not support her on this. It remains to be seen whether it will support Secretary Kerry. Some non-lethal aid has already been provided. We shall soon discover whether that constitutes a foot on the slippery slope leading to full-scale U.S. involvement in that conflict, with all the dangers that will involve.

It is no secret that John Kerry was not President Obama’s first choice for Secretary of State. His preference was for U.N. Ambassador Susan Rice. Events have prevented anyone from learning whether Rice was qualified for the job; the consensus everywhere except in the Oval Office was that she was not. But that is a moot point now. The issue now is whether John Kerry is qualified for the job. In a time when the United States is trying to extract its battered forces from two war zones and to reset its defense capabilities, Secretary Kerry’s self-indulgent first steps are not reassuring.

[1] In a speech before the National Press Club in January 1950, Secretary of State Dean Acheson appeared to suggest that South Korea lay outside the United States’ sphere of interest. There is a substantial body of thought holding that Russia’s misapprehension of Acheson’s remarks led directly to the Korean War.