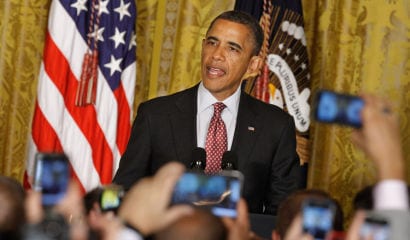 Barack Obama’s position on gay marriage hasn’t so much “evolved” as revolved. In 1996, as a state Senate candidate in Illinois, he told Outlines (which became the Windy City Times), a gay magazine based on Chicago’s North Side, that he supported “legalizing same-sex marriages, and would fight any effort to prohibit such marriages.”

Even some on the left acknowledge that he and his aides have been lying about his supposed evolution on gay marriage for years. “He always supported it,” David Plotz of Slate has written.

In order to win the White House in 2008 and 2012, Obama and his aides just decided to dupe the American people. They claimed that Obama hadn’t filled out that 1996 gay marriage survey, even though his signature appears clearly on it.

At a 2011 Network Nations blogger conference, an exasperated and scoffing host asked White House Communications Director Dan Pfeiffer, “So it was a fake questionnaire?” The rattled aide responded: “If you actually go back and look, that questionnaire was actually filled out by someone else, not the President. There was a long debate about this in the campaign…. This was litigated in the campaign.” He added, “The president has never favored same-sex marriage. He is against it.”

David Axelrod lied brazenly in both campaigns too, saying Obama “does oppose same-sex marriage,” which had been his position “throughout” his career.

So for almost two decades Obama has been lying through his teeth, flip-flopping this way and that, depending upon the political needs of the moment. Last year’s limited modified hangout position was that he considered gay marriage a matter for the states to decide. His support for it was merely “personal.” Joe Biden’s declaration in favor of “men marrying men” forced Obama into telling this lie earlier than he wanted. He had planned to roll it out at the Charlotte convention, but Joe “got out a little over his skis.”

This was an easy enough lie for him to maintain as the Romney campaign never bothered to challenge him on it. That Obama was going to nationalize gay marriage didn’t come up a single time in the campaign or the debates. The Romney campaign couldn’t even bring itself to defend Chick-fil-A against Rahm Emanuel.

“At a certain point, I’ve just concluded that for me personally it is important for me to go ahead and affirm that I think same-sex couples should be able to get married,” Obama told ABC, which added that the “president stressed that this is a personal position, and that he still supports the concept of states deciding the issue on their own.”

Last week, Obama said that states should not decide the issue on their own. His statement still had a smarmy, hedging tone about it (notice the word “probably”), but that’s what he ends up saying: “And if the state doesn’t have a good reason [to justify Proposition 8], it should be struck down. That’s the core principle, as applied to this case. The court may decide that if it doesn’t apply in this case, it probably can’t apply in any case. There’s no good reason for it. If I were on the court, that’d probably be the view that I’d put forward. But, but I’m not a judge, I’m the president.”

The press, of course, plays along with this weasely charade, asking him fawning questions about his “evolution” instead of asking him: Why have you been lying since 1996? Why couldn’t you win the White House honestly? Don’t you feel like a coward and fraud for having faked up a position which your Justice Department now calls unconstitutional discrimination? Don’t you feel ashamed of having to make up lines in your memoirs about how “I may be seen as someone who was on the wrong side of history”?

The key to frying frogs is to turn up the temperature slowly. That’s the amoral Obama-Alinskyite approach to politics. You just lie, lie, lie, until it is politically safe to state the real liberal position clearly. As Alinsky bragged to his community organizers, “I feel confident that I could persuade a millionaire on a Friday to subsidize a revolution for Saturday out of which he would make a huge profit on Sunday even though he was certain to be executed on Monday.”

Obama must chuckle privately with his aides about how easy it is to con the American people through such methods. The next layer of deception to peel back is Obama’s claim that he respects religious freedom and would never dream of imposing gay marriage on religious denominations. He respects the “sacraments.” Never mind that his wife has said that gay marriage belongs at the “altar.”

When the coast is clear, liberals will pressure religions into embracing gay marriage. Those that refuse will be branded “bigoted” and “discriminatory” and thus unworthy of governmental recognition.

The left doesn’t seem to mind Obama’s frog-frying methods and the dirt that collects on his halo. They take his expedient lies in stride, though one would think the staff at the Windy City Times might demand an apology.