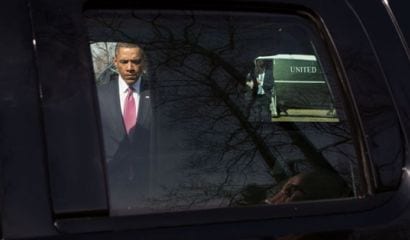 Almost a week since the dreaded sequester went into effect, and look out your window. To quote President Obama the day after Obamacare was passed, the sun is still shining, the birds are still chirping, and the earth is still spinning on its axis.

Everybody knows by now that President Obama was telling a lot of tall tales to stop the sequester from cutting even 1% of federal spending, not from current levels of spending, but from the increase in spending this year. That should make clear Democrat policy is to oppose any cut in federal spending.

But the sequester debate also clarified President Obama’s economic policy. If you listened carefully to what Obama was saying, you would see that Democrat economic policy holds that it is government spending that drives economic growth and prosperity. If that should sound nuts to you, that’s because it is. I don’t want to appear to make the notion sound respectable. But that is the reality that we have to deal with.

And we are not talking here about government infrastructure spending, national defense, or even education spending, all of which can have positive economic growth effects, when done right and effectively, education spending longer term, infrastructure and national defense more immediately. We are talking here about general government spending on everything, which is what the sequester was about.

What Obama and the Democrats were saying repeatedly during the sequester debate is that the government spending cuts would hurt the economy, but increasing taxes would not!

That is right, they said repeatedly the sequester spending cuts would hurt the economy today, but that could be avoided if we would follow their recommendations and increase taxes instead. In fact, the alternative Democrat sequester bill that barely failed in the Senate would have increased capital gains and dividends tax rates again, on top of the January increases from Obamacare and the expiration of the Bush tax cuts. America would then suffer with the fourth highest capital gains tax rate in the world, to go with Obama’s highest corporate tax rate in the world (except for the socialist one party state of Cameroon).

Yes, America is rapidly becoming the world’s leading socialist state. Everyone else, including former communist/socialist powers such as China, Russia, and India, are turning to the Reaganomics we here in America have so stupidly abandoned. If you want to move to Argentina, stay put. Argentina is coming to you. If you want a booming capitalist country following the policies of Reaganomics, move to formerly socialist Canada.

The Democrat-proposed further tax increases are not even good Keynesian economics. Even Keynesian economics says raising taxes hurts economic growth. Their explanation of that is all wrong, focusing on the reduction in so-called “aggregate demand,” rather than incentives. But at least the Keynesians got the policy right.

It is true that Keynesian economics supports the idea that increased government spending, deficits and debt is what sparks recovery and renewed economic growth. That is core Democrat policy, and what you are voting for every time you vote Democrat. But there is no more discredited idea in economic history (except for outright Marxism), both intellectually and in practice.

Keynesian support for increased government spending to boost the economy fails to consider that government has to get the money to spend from somewhere, either increased taxes, increased borrowing, or inflation. And all of that takes an equal amount out of the economy, leaving no net increase in demand. In fact, when the negative economic effects of the increased taxes, borrowing, or inflation are considered, the net result is a contractionary drag on the economy. That is why Keynesian economics has never worked. Obama’s nearly $1 trillion so-called “stimulus” in 2009 just proved that yet again.

Indeed, the entire Keynesian focus on “demand” is misconceived, because demand is insatiable, and can never be inadequate in a market economy. If demand for any good or service is insufficient for the supply, in a market economy the price of the good or service will just decline, until demand equals supply. Keynesian economics survives only because it supports what Democrats want to do, which is increase government spending, deficits, and debt. See, e.g., Paul Krugman.

The obscured truth that our very dumbed down country right now can’t get is that economic growth is the ultimate determinant of revenues, and deficits. Follow pro-growth policies, and you get booming revenues and disappearing deficits. But that is so yesterday for America, which thinks now with rapidly declining Europe that pro-growth policies are “unfair.” (What is fair about plummeting middle class incomes, soaring poverty, and persistent high unemployment?) This in the formerly richest, most prosperous nation in the history of the world. Good job, Progressives, you have your fundamental transformation of America (into Argentina).

The Coming Crash of 2013
I have long been on record as predicting renewed, double dip recession for 2013, just as happened during the depression. The full story on that can be found in my short book published in 2011 by Encounter Books, Obama and the Crash of 2013, and my long 2011 book published by HarperCollins, America’s Ticking Bankruptcy Bomb.

That is because all of Obama’s policies are so anti-growth — increasing tax rates, especially on capital investment that is the foundation for jobs and rising wages, increasing regulation, easy money with a weak dollar, and increased government spending, deficits and debt.

But here is the first coming sequester lie. When the economy turns down this year, Obama and his socialist Democrats will all blame it on the sequester spending cuts. Cut just the increase in government spending by just 1%, and that is supposed to be the roots of another recession. The great debate will be what caused the downturn, the spending “cuts” or the tax increases, (plus regulation, plus the cheap dollar, plus the exploding escalation of debt). That is if our party-controlled, new socialist media (stop calling them the mainstream media, nothing remotely mainstream about them) even allows the debate on the air.

Republicans Gaining Some Control Over Spending
But one emerging truth out of the sequester battle is that the Republicans are gaining some control over spending. The sequester spending cuts over 10 years total $1.2 trillion, out of a 10-year budget of $47 trillion, or 2.5%. But the next battle over spending presents opportunity for still more spending restraint.

That is not the debt ceiling, which leaves the Republicans with little leverage, because Obama has already convinced the country that failing to increase the debt limit means defaulting on the national debt. Even Fox News reports on it that way, as if you can’t continue payments on what you owe on your credit card unless you get an increase in your credit limit. You see what I mean when I say our country is so dumbed down right now?

The opportunity is for the Republicans to pass a new continuing resolution that provides for continuing discretionary government spending, or at least domestic discretionary spending, at the exact same levels as last year, minus the already enacted sequester spending cuts. The Republicans and the conservatives then need to drive home to the public two simple points.

One is that the continuing resolution involves no new spending cuts. It just continues government spending at the same levels as last year. This can successfully counter the Democrat media theme that crazed radical Republicans want to tear the federal government to pieces, destroying the economy and the safety net for the poor, sick, weak, and vulnerable in the process. But such an effective spending freeze even on just discretionary domestic spending will add up to serious savings over time.

The Republicans have to be focused in driving this point home, because the Democrat-party controlled media at NBC, CBS, ABC, the New York Times, the Washington Post, etc. will definitely not keep the public informed as to what is happening in Washington with their federal government. I have read two Washington Post columns this past week by closet Marxist revolutionaries E.J. Dionne and Dana Milbank who misinformed readers that the Republicans failed to act to do anything to pass an alternative to the sequester, when the truth is the Republican House passed two alternative sequester bills that rationalized the spending cuts, and the Democrats failed to take any action. If you or anyone you know is subscribing to the Washington Post, that is part of the problem causing the decline and fall of America. Ditto that for the openly Marxist New York Times. (I read the columns in Investor’s Business Daily).

This process will force the Democrats to take a stand in the light of day that they want to increase spending, deficits, and debt still more, even while the country is careening towards bankruptcy. The whole point of the Democrat Senate failure to pass any budget in the past four years is to hide this from the American people. Forcing the Democrats to act in public where they can be held accountable will frame the issue for the public correctly.

The Republicans and the conservatives need to drive this second point home also so that the public can understand who to hold accountable for any government shutdown. The President has the bully pulpit, and the party-controlled media, so artfully informing the public of the truth is critical.

House Republicans can help their case for controlling government spending immensely if they will hold aggressive oversight hearings on government waste, fraud, and abuse. When the Democrats wanted to slash defense spending, they held hearings about the Defense Department buying $100 hammers and $500 toilet seats. OMB and GAO have already documented failed government programs not accomplishing their stated laudatory goals, and at least $125 billion in waste, fraud, and abuse. Holding hearings to communicate and dramatize that would put Democrat socialists on the defensive. Sure the Democrat party-controlled media will not cover it. But the alternative conservative media will, embarrassing the party hack media in the process.

But here is the second coming sequester lie. If the Republicans are successful in these spending restraint strategies, you know of course Obama will take the credit. After the 25% increase in government spending in year one of Obama’s term, the spending increases Obama can get through from that base with the Republican-controlled House may appear negligible, especially in percentage terms. The Democrat party-controlled media will then sing Obama’s praises as the most restrained government spender since Eisenhower.