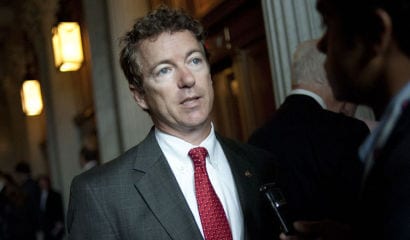 More Politics
Sign up to receive our latest updates!
Register
Hot Off
The Press
Another Perspective
The GOP’s Social Security Suicide Mission
by Keith Naughton
In Print Fall 2022
Serious and Funny
by Byron York
Ben Stein's Diary
Weekend Sadness
by Ben Stein
Biden Watch
The Biden With His Hand Out
by Debra J. Saunders
Buy the Book
Edgar Allan Poe’s Love-Hate Relationship With the City
by Leonora Cravotta

I don’t use Twitter very often, but late Wednesday morning, after watching half an hour of Senator Rand Paul (Tea Party/Republican–KY) filibustering the nomination of John Brennan to head the CIA, I felt compelled to send out the following: “Watching @SenRandPaul, @SenMikeLee, and @SenTedCruz filibuster John Brennan gives hope for America.”

Senator Paul was, and is, objecting to the Obama administration’s pathetic response to questions regarding federal authority to use drone strikes against American citizens on American soil. In the senator’s view — and it’s hard to reasonably disagree – Attorney General Eric Holder’s March 4, 2013 letter in response to Sen. Paul’s questions about this authority is deeply troubling.

It is a letter which would cause a media uproar and calls for impeachment from congressional Democrats and their newspaper lackeys if the author worked for a Republican administration. (Conor Friedersdorf of the Atlantic does a masterful job of deconstructing “Holder’s Evasive, Manipulative Letter.”)

A few lowlights of the Holder letter (emphasis mine):

Holder goes on to say that if there were an emergency, he would “examine the particular facts and circumstances before advising the President on the scope of his authority.”

Does anyone remember the fury from the left and from civil libertarians regarding President George W. Bush’s “warrantless wiretapping” program in 2005? Senator Dick Durbin (D-IL) said at the time that the president “has no legal basis for spying on Americans without court approval.”

But on Wednesday, when Senator Paul asked to schedule a vote on a resolution of Senate opposition to the use of drones on Americans in America, Durbin objected. Spying on Americans is unforgiveable. Blowing them up with a Hellfire missile, not so much. What would Durbin be saying if Bush were still president and Holder’s letter were written by Alberto Gonzales.

Senator Paul’s filibuster was dramatic and historic. Indeed, while CSPAN2 is normally less interesting than a 3 AM half-hour long infomercial for Facelift in a Flash, not once from the time I started hearing Senator Paul, before 10 AM here in the Rocky Mountains, through at least 10 hours later as I write this note, did I consider changing the channel.

To give you a sense of Paul’s intensity and seriousness, he gave every one of the following remarks within a five-minute span just after 7:35 PM Eastern Time:

I repeat: that was in one five-minute span.

The entire performance was masterly, including repeatedly forcefully standing up for the Constitution with lines like “I don’t know how to halfway believe in the Fifth Amendment” and “the president above all people…should realize that his opinion is not so important.… For him to say he doesn’t intend to kill people, I would defy a constitutional lawyer in this country to say that’s important.” And, to make his larger point in the fewest possible words, “I will not sit quietly and let President Obama shred the Constitution.”

If you don’t have time to watch Senator Paul’s damning indictment of the Obama administration, pick any hour’s transcript and enjoy the reading. As Jedediah Bila put it, Senator Paul “is the kind of guy who can draw in people who aren’t terribly political. Really like his speaking style.”

The political ramifications of Wednesday’s Senate spectacle are enormous. With the first filibuster in recent memory during which a senator actually filibustered, the media cannot simply report “Republicans filibuster another Obama nominee.” The story and the video are too compelling.

Even “low-information voters” will not fail to notice the sharp contrast between the deadly serious Senator Paul and the perennially unserious President Obama. Over the past two weeks, culminating in this filibuster, Rand Paul has been standing up against massive usurpation of power by the executive branch while Barack Obama has been playing golf with Tiger Woods and trying to scare the public to death about the sequester. Rand Paul’s principled doggedness is the perfect foil for Barack Obama’s permanent campaign and utter lack of leadership.

The specific issue that Rand Paul is raising should be non-partisan. One cannot imagine an American liberal, prior to their minds being absorbed into the Obama Borg, who would have accepted answers such as we are receiving from Holder and Brennan. The fact that only one Democratic senator, Ron Wyden of Oregon, stood with Senator Paul should highlight to independent voters that the few principles Democrats had left following the Clinton administration have all been snuffed out by a distilled Alinskyite utilitarianism that would make Machiavelli shiver.

Paul’s performance also brings renewed political credibility to the Tea Party. After all, although it got much less press than Marco Rubio’s response to the State of the Union address (and what press that got was mostly about taking a sip of water), Sen. Paul gave the Tea Party response – seeming credibly additive to the Republican position rather than as a fringe or splinter view. Wednesday added to Paul’s credentials, likely surpassing Marco Rubio (in terms of public perception) as the Tea Party’s soul in the Senate.

The response to the filibuster on Twitter was enormous, picking up the hash tag #filibilzzard to go along with the top “trending” tag on the planet for a few memorable hours, #StandWithRand. This is not only important because the filibuster received so much attention, but because it is the first time I can think of that Republican politicians acting in defense of principle were driving the conversation on a medium dominated by young adults – a group that has supported Barack Obama by 2-to-1 margins in the last two elections.

Other politicians saw the power, the historical nature, of what they were watching on TV and flashing across their Twitter feeds, and they wanted in… as would I. First (that I saw) was libertarian Republican Justin Amash (MI) who early in the morning said, “We stand w/you against CIA’s illegal use of killer #drones on US soil.” (Amash was the only congressional candidate I contributed to in the 2012 cycle.) Connie Hair, the Chief of Staff for Rep. Louie Gohmert (R-TX), tweeted “@RepLouieGohmert says he is there with now 9 House members on the Senate floor to #StandWithRand.”

Radio talk show host Laura Ingraham, via Twitter, urged voters to pay attention to who was standing with Rand and who wasn’t. Dana Loesch similarly suggested that the “GOP could take a massive step in uniting the factions on the right by joining together to #StandWithRand. They’re dodging a golden op.”

And the happy father, former Republican Congressman Ron Paul, joined the Twitterverse: “I’m proud of my son’s efforts today to shed light on this admin’s destructive and dangerous drone policy.”

Senator Ted Cruz (R-TX) spent some time reading tweets to Senator Paul, who had not had access to electronics while filibustering, which Paul seemed grateful for and rejuvenated by. It was not only – in fact it was not primarily – politicians who responded to the intensity of Paul’s principled stand. A few examples out of many thousands from “ordinary” citizens, except that these days nobody who is truly concerned with liberty and the Constitution is ordinary:

Some professional liberals — who, I repeat, would be screaming from the rooftops about the slightest hint of a suggestion of a whisper of drone strikes on Americans were George W. Bush still president – had deep intellectual responses to the filibuster…such as “batshit crazy.” (Resistance is futile, after all.)

But even among self-identified liberals and Democrats outside the intelligentsia, a common theme was expressed by one Tyler Whitney: “I happily voted for and support @BarackObama I am a #Democrat and #Liberal, but I and more have the same questions and I #StandWithRand.”

For hours throughout the course of Wednesday, Rand Paul created a political earthquake. In the presidential sweepstakes, which even a political writer really doesn’t want to think about for another three years, Paul Ryan and Marco Rubio now have serious competition in Rand Paul. In the meantime, Senator Paul has made the strongest case yet, and perhaps one of the strongest cases possible, for why voters must not give Barack Obama greater power in 2014. A senator can make an occasional impact with a filibuster, but if Democrats take control of the House of Representatives in 2014, the damage done not just to our economy but to the very fabric of our republic may be impossible to repair. It is a message that was not stated on Wednesday, but was nonetheless absolutely clear.

Over the course of Wednesday, watching Senators Rand, Lee, and Cruz, I was left wondering whether I had witnessed an interesting but fleeting moment in history, or a profile in courage that will be remembered as a catalyst for the transformation of the Republican Party.

Nearly 11 hours into the filibuster, Senator Cruz said to Rand Paul “The heart of what you’re standing for is liberty.” Hallelujah, Brother Cruz, I too #StandWithRand.