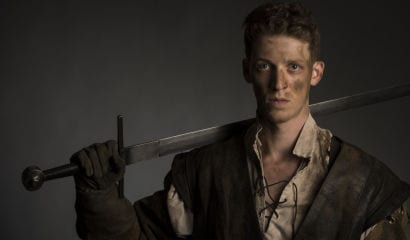 Once more unto the breach, dear friends, once more,
Or close the wall up with our English dead!
In peace there’s nothing so becomes a man
As modest stillness and humility,
But when the blast of war blows in our ears,
Then imitate the action of the tiger…
— The Life of Henry V-Act 3, Scene 1, 1-7

This weekend the curtain fell on the Folger Library and its Elizabethan Theatre’s production of Henry V with justifiably rave reviews. This is the same Folger Library founded by Henry Folger, former president of Standard Oil and collector of a treasure trove of Shakespeare archival material.  You probably have some dog-eared copies of Hamlet and other plays from high school published by Folger with helpful glossaries and notes.

The play was held over an extra week due to sell-out audiences, a feather in the caps of director Robert Richmond and an amazing young American actor, Zach Appelman, a California native who was born to command the stage and, as Harry, carry the audience along with him to victory at Agincourt.

Be on the lookout for this 27-year-old classical actor who, in college, spent hours as a student listening to recordings of the works of Shakespeare performed by Olivier, Gielgud, Dench, and McKellen on ear buds at a library carrel.

According to director Richmond, Appelman came to the New York audition and “knocked it out of the park.  He asked if I wanted to hear it with an English or American accent.”

“He looked like Henry V and stood there and had a charisma and physical bearing,” said the director.  “Doesn’t happen very often.  I was all aquiver.  I couldn’t focus for the rest of the day.”

My wife and I, along with two of our literary-minded children, sat in the very first row of the theatre which is relatively small with an ambience of intimacy and very, very close proximity to the on-stage action.  We were looking up at the towering Appleman or so he seemed to us.  We cringed when the sword play swung in our direction.  We could see the spittle from the actors’ mouths set off by the lighting.  We held our breath as Harry rallied his troops to greater exertion, and laughed as he tried to woo a French wife.  Gripping!

Washington, D.C. is blessed with several venues for Shakespeare productions.  But, honestly, we prefer the classical productions because we don’t get out all that much.  Save the modernist interpretations for the aficionados who have seen the plays performed many times before.  Call us middle brow, but there it is.  So we were fortunate to have seen this exquisite production of Henry V.

I understand that some productions of this play, out of sensitivity to British sensibilities and patriotism, delete some of Harry’s more bloodthirsty lines in which he threatens the inhabitants of a besieged French town with plunder, rape (literally), infanticide (literally), and general mayhem.  He also orders reprisals, i.e., killing of unarmed prisoners, after his army’s baggage train is overrun and his men slaughtered in violation of the rules of war at the time.  Harry is the picture of manliness and charm, but today he might be charged as a war criminal.  Please don’t send me any e-mails on this.

My daughter tells me there is a genuine academic debate as to whether Harry is a Christian king (per a line from the Chorus at the beginning of Act 2), a Machiavellian prince, or a conquering Caesar.  My son and I wondered if there was a difference between the second and third roles, but let’s set that aside for now.  My daughter definitely came down on the side of conquering Caesar, I presume, because the English designs on French lands were, well, let’s say, questionable.  Moreover, Harry’s motives, like most human beings were mixed given the entanglements of English and French history.

There are some passing, familial references in the play to Harry’s uncle, the Black Prince who basically waged a war of slaughter and attrition as part of his contribution to the Hundred Years’ War.  Harry may not have been that bad, and Shakespeare was not going to say anything explicitly unflattering about the Tudor line given his family’s Catholic ties.

As an aside, I have a hard time trying to reconcile claims that Shakespeare was some sort of crypto-Catholic given his unabashed pro-Tudor propaganda.  Then, again, what else could he do during the reign of Elizabeth I?  But that is a topic for another time.

Harry’s exertion eventually came to naught as the English were driven out of France seven years after they burned Joan of Arc at the stake pursuant to a kangaroo-court trial.  She actually predicted as much.

But Shakespeare’s Henry is magnificent.  We cannot but embrace his valor, his ambition, his guilt and his glory.  This play is one of the greatest in the entire canon.  It’s language will forever drive us to do great things in the face of adversity on and off the battlefield.

For he today that sheds his blood with me
Shall be my brother; be he ne’er so vile,
This day shall gentle his condition;
And gentlemen in England now abed
Shall think themselves accursed they were not here,
And hold their manhoods cheap whiles any speaks
That fought with us upon Saint Crispin’s day.