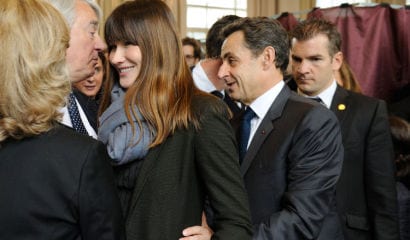 In January 2012, four months before the presidential election, Nicolas Sarkozy warned his countrymen, “If I lose, you won’t hear any more from me.… I’ll make a lot of money and live la dolce vita.” That wasn’t enough to scare them into voting for him. They were sick of his pushy, flashy, undignified style, tired of seeing him jog around Paris in a NYPD T-shirt, fed up with his very public marital troubles. On May 6 they voted him out of office, a humiliated one-term president. It was all the more galling because voters had preferred the bland socialist apparatchik François Hollande to him. Sulking, Sarkozy proclaimed he was leaving politics for good. Never again would he run for high office. He would become merely “just another Frenchman.” France would be sorry, but he was parti pour de bon, gone, out of here.

He set up a law office in a suitably chic district of Paris, tried the lucrative international speaking circuit (he’s said to be trying to improve his shaky English to make himself more marketable), and has been considering heading a private equity project with Qatari financial backing. For ten months the pint-sized, 58-year-old Sarkozy kept a low profile — one of the few activities where his five-foot-five stature is an advantage. His third wife, the model/pop singer Carla Bruni, strummed her guitar and brought out a new album. “I have no wish for Nicolas to go back into politics,” she said. “We are very happy in our new life.”

Occasionally, though, there were glimpses of the compulsive political animal, the one who avowed years ago that he thought about becoming president of France every morning while shaving. He briefly made a show last year of trying to help unify his center-right Union for a Popular Movement (UMP) party, fallen into disarray with rival candidates bitterly vying for his vacated leadership spot. When that failed, it was perhaps not entirely a disappointment. It left him looking like the one-and-only, once-and-future leader of French conservatism.

In recent months the sky has filled with Sarkozy’s trial balloons testing the political wind. Close associates have busily fed his ideas to the media. One day they would let it be known that he was worried that the new socialist administration was driving the French economy into the wall with its high-taxation policies. On another they related his opinion that Hollande was seriously underestimating the dangerous level of exasperation in a country plagued by rising unemployment and a stagnant standard of living. He lamented France’s diminishing international clout; Hollande had spoiled the close working relationship he had worked so hard to build with German Chancellor Angela Merkel. “I can’t leave France like this,” he was reported to have said.

The cast of those promoting a Sarkozy comeback includes former Prime Minister Alain Juppé, now the popular mayor of Bordeaux and a senior UMP figure. “I get the feeling that he wants to run,” Juppé said recently. “He follows politics closely, and from our regular phone calls I can tell he is extremely vigilant.” There is Bernadette Chirac, wife of the former president Jacques Chirac and longtime Sarkozy supporter, who openly called on him to run in the 2017 election. There is even Carla. Despite her professed happiness as an ex-first lady, she felt it necessary to deliver some pointed political analysis. “Hollande is terrible, and we’re going to be stuck with him for the next 10 years,” she allowed recently. “Because in the next election [the far-Right leader] Marine Le Pen will be his opponent, and naturally he will win.” Her husband could change that: “Nicolas could spare France this awful duel.”

Hollande himself appears to fear that Sarkozy will make a shot at political revenge. Analysts more astute than I point out that, for the first time in living memory, the new president has deliberately shunned any reference to his predecessor since taking office. The more Freudian among them hold that this shows unconscious fear of Sarkozy. For proof, they cite the incident at a recent agricultural fair in Paris. As Hollande made the obligatory rounds among the cows, pigs, and chickens, he came across a little girl who asked innocently, “Where’s Monsieur Sarkozy?” “You won’t be seeing him,” Hollande shot back aggressively, while carefully avoiding the dread name. A Freudian slip revealing a deep-seated fear that he had not politically killed off the pugnacious, still-smarting Sarko?

Last week his advance guard launched their most ambitious barrage of Sarko-think yet. An eight-page spread in a conservative weekly, which gave every sign of being approved by Himself, left no doubt that he could be persuaded — easily — to make a comeback. To be sure, according to quotations attributed to close friends of his, he had no personal desire to return to the world of politics, which he found “deadly dull.” Besides, they quoted him as saying in private, “Why would I want to take over France in the sorry state in which the socialists will leave it? No, frankly, I’m not tempted to make a comeback, especially after the way my wife and I were treated, with her prevented from singing for five years.”

But still. He couldn’t help believing that Hollande’s application of clumsy socialist policies was setting France up for a series of calamitous crises. The first would be economic, with increasing unemployment and the collapse of entire industrial sectors like automobile production. “Then there will be a social crisis, then a financial one of a rare violence, and finally big political trouble.” When, not if, this happens, he will be morally obliged to act. “Unfortunately there will be moment when the question is no longer ‘do you want to,’ but ‘do you have a choice?’ In such a case I can’t just keep on telling myself, ‘I’m happy, I can take my daughter to school, I’m speaking at conferences all over the world.’ Then, yes, I would have to get back into politics. Not because I want to. Out of duty. Only because it’s for France.” The historical parallel with the triumphant return to politics of Charles de Gaulle in 1958, with France on the verge of civil war, was only too obvious.

Sarkozy’s outburst caused a predictable splash, not least because the French are indeed thoroughly disappointed with their choice of Hollande as president. His approval rating is now hovering around 30, the lowest of any new president in the history of the Fifth Republic. Dozens of businesses and factories are closing by the month. Sales of French automobiles are down 15 percent, while those of German and Asian makers are up, raising the specter of no more Renault, Peugeot, or Citroën cars within a generation.

The only constantly rising statistics are unemployment, now around 11 percent (more like 25 percent among the young), meaning some 3 million on the dole, and violent crime. A recent best seller, Clockwork Orange France (an allusion to the 1962 dystopian novel by Anthony Burgess depicting gratuitous violence), purports to show the true face of “an ultra-violent France where you can be killed for looking at someone the wrong way.” Citing official but seldom-published statistics, the author, a French investigative journalist, claims that every 24 hours French citizens are victims of some 13,000 thefts or burglaries, 2,000 aggressions, and 200 rapes.

Even the country’s present dire socio-economic straits may not be enough to make Sarkozy a credible candidate for the title of providential Savior of France. Charles de Gaulle in elevator shoes, as it were. For one thing, his inability to leave the political scene for even one year — after having vowed to leave it for good — will remind many of the twitchy, unpredictable politico they voted against. For another, he still faces a number of charges and criminal investigations for corruption, notably for allegedly financing his campaigns with secret envelopes full of cash from Liliane Bettencourt, the L’Oréal heiress recently named by Forbes as the world’s richest woman. And if he does get involved in a private equity firm for the wealthy, that will further alienate whole sections of the French electorate.

No one would accuse the impetuous Monsieur Sarkozy of lacking ambition. Or of false modesty. “I will only run if no other natural candidate imposes himself,” he humbly told a member of the National Assembly recently. But he just couldn’t resist adding, “There won’t be one.”