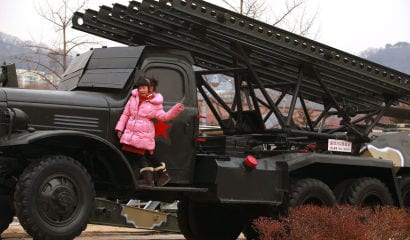 It took Dennis Rodman to make Hillary Clinton and John Kerry look good. When the former NBA star reported on his “basketball diplomacy” mission to North Korea, he informed us that Kim Jong-un was really a nice guy, someone who didn’t want war and only wished for a phone call from President Obama.

Before Rodman arrived, North Korea conducted its third nuclear test. And soon after Rodman’s return, Kim Jong-un threatened a nuclear attack on the United States and his neighbors, adding that his nation was pulling out of the ceasefire agreement that ended the Korean War in 1953. It has “cancelled” the armistice before, in 2009, when South Korea joined the “Proliferation Security Initiative” which calls on the nations belonging to it to interdict shipments of nuclear and missile technologies that emanate primarily from North Korea.

A few days ago, Kim told his troops to be ready for “all-out war.”

Rodman’s attempt at diplomacy-by-idiot failed spectacularly but probably wasn’t any more damaging than our other idiotic attempts to engage the Norks. Under Defense Secretary William Perry’s “Agreed Framework” of 1994, we were supposed to ship fuel oil to North Korea in exchange for their stopping the construction of nuclear enrichment plants. That failed when the Norks immediately broke the agreement and continued construction of facilities to produce highly enriched uranium for nuclear weapons.

The North Koreans have never made an agreement they intended to follow. (Another example is the 1998 moratorium they agreed to on missile test launches which lasted until 2006 when they found it inconvenient.)

Bellicose rhetoric and actions from North Korea are as unusual as the sunrise. The pattern has been consistent. The Norks would resort to threats of war and weapons tests whenever their elites felt threatened either in their security or their lifestyles.

Violation of past agreements has resulted only in more threats of “isolation” and successive economic sanctions that haven’t done anything to slow or stop their development of nuclear weapons and missiles. But in the past they have waited for one dose to settle before launching another. Now, they’re in some sort of rush that is uncharacteristic and, for that reason, more dangerous.

The frantic pace at which the latest Kim is peddling their bellicosity is something new. It probably indicates that the generals behind Kim are concluding that their warlike rhetoric and nuclear and missile tests aren’t working any longer. Their confidence that they can continue to push us around may be eroding.

But their bluster hasn’t relieved them of the economic sanctions that have affected the standard of living of their elites. The more they see themselves on the losing end, the more they take truly threatening actions such as the November 2009 missile test that resulted in an ICBM passing over Japan.

North Korea’s people live in poverty, quite literally in the cold and dark. I have a copy of Donald Rumsfeld’s favorite picture on my office wall. It’s a satellite photo of the Korean Peninsula taken one night in early 2006. It shows the North Korean capital, Pyongyang, brightly lit. The entirety of the rest of North Korea is dark, contrasted with South Korea lit from coast to coast.

North Korea’s elite — comprised of Kim, his retainers, and the higher ranks of their military — have enjoyed the high life. Imports of everything from kidnapped Japanese girls (under Kim’s father) to fancy cars and expensive booze create a lifestyle for them that’s nothing like what ordinary North Koreans suffer. But even that is threatened now. Sanctions aimed at their luxuries have been tried before, but now new UN sanctions agreed on unanimously by the Security Council ban everything from yachts to race cars as well as reiterating the bans on nuclear and missile materials and technologies.

Most importantly, China — North Korea’s mentor and chief supporter — didn’t block the new measures. But North Korea reportedly is planning a new nuclear test in response to the UN’s actions, and to joint U.S.-South Korean military exercises planned for this week.

The question is what will the North Koreans do? We should expect everything short of an all-out war. What the Norks want is another agreement in which they blackmail us into relieving economic sanctions that affect their elite. They may trade artillery fire with us and the South Koreans over the DMZ, bringing us to the brink of war. They will — as soon as they can — launch more missiles on provocative trajectories, possibly aiming across Japan again or even over South Korea. And they will test more nuclear weapons, continuing development of warheads that can be delivered by ICBMs.

Our problem — and South Korea’s, and Japan’s — is how to respond to the Norks’ aggressive acts. There is no agreement we can make with them that they won’t violate. The mistake in the Clinton-Perry “Agreed Framework” was in making it at all. We’d make the same mistake if we agreed to some relief from sanctions — allowing them to totter along economically — while they continue to test nuclear weapons and ICBMs. To blackmail us into a new agreement, they’ll up the stakes. The danger is in their overestimation of their own capabilities.

Their most dangerous action so far was the 2009 launch over northern Japan. Though it didn’t hit Japan, and no debris apparently fell on Japanese territory, the Norks’ boldness gave evidence to their confidence that we — and Japan — wouldn’t respond militarily. The next test could be aimed closer to Tokyo, pass over South Korea or even be aimed at the US. How bold the Norks are, and how confident in their own abilities, could result in either an erroneous hit on Japan or South Korea or an intentional one they claim to be a mistake. Either would have to be answered by military action.

President Obama said he’s confident we could defend ourselves against any North Korean missile attack. And he’s probably right, at least for now.

North Korea hasn’t yet mated a nuclear warhead to a missile capable of hitting the United States. But they will achieve that capability sooner or later. And our missile defenses are far from foolproof. Obama isn’t going to allow them to be developed much beyond the point they are in now. Cutting military spending affects missile defense along with everything else, and Obama is no fan of the program.

So what do we do? In June 2006 — having witnessed the failure of his “Agreed Framework” — former defense secretary Bill Perry (with Ashton Carter, now deputy defense secretary) wrote a revealing op-ed in the Washington Post. After ritually deriding Bush’s pre-emptive war doctrine and the Iraq War, Perry and Carter argued strongly for a pre-emptive strike on North Korea’s missile launch facility to destroy its Taepodong missile on the launch pad.

President Bush never ordered the strike, and Obama isn’t about to do that now. Obama is dedicated to permitting the UN to control our actions, and neither China nor Russia would endorse any military action against North Korea. If North Korea began readying another long-range missile for launch, we could — and should — do what Perry suggested in 2006: launch a cruise missile or other conventionally armed missile and destroy the Norks’ missile on the launch pad. But we won’t.

What will come depends entirely on North Korean calculations of their own weaknesses and ours. And this is where it gets complicated.

If Kim’s generals wanted to force us to bribe them into another missile moratorium, they might launch a missile at the oil-rich Senkaku Islands off Japan which are uninhabited and the ownership of which is disputed by China. Would Japan have to respond militarily in defense of the islands, possibly drawing China into a conflict with Japan? Would we, under our mutual defense agreement with Japan, be drawn in too?

If the Norks wanted to force us into some other agreement they might take an aggressive act against South Korea. That would be as big a gamble, because the South Koreans — their capital only a few miles from the DMZ — would be more likely to strike back with air strikes or more, again drawing us in.

For Obama, the North Korean mess is a spectator sport. We’ll wait, and watch what goes on without trying to influence the events. If we had a president more interested in foreign affairs, he would now be answering Kim’s rhetoric with restatements of our commitment to defend not only our homeland but also those of Japan and South Korea. When North Korea was a non-nuclear power, their threats could be brushed off. That is a luxury we no longer enjoy.