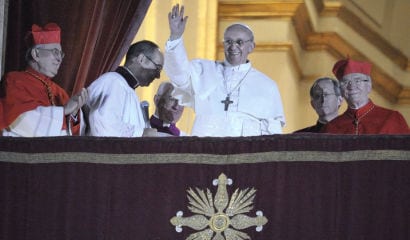 Jorge Mario Bergoglio, now Pope Francis, defies easy categorization. Neither liberals nor conservatives quite know what they are getting.

The left has immediately pounced on him for his reported opposition to gay adoption, gay marriage, abortion, and euthanasia, even as they approve of his name, which they interpret as a sign that he is oriented towards “Social Justice” and eschews “pomp.”

Meanwhile, traditionalists, while praising his humility and happy to see his past pro-life, pro-marriage statements, aren’t uniformly thrilled either, with some seeing him as an elliptical Jesuit who will arrest the Church’s orthodox trajectory and liturgical tightening under Benedict XVI.

Still, a 76-year-old “slow-moving” prelate “with one lung,” as a reporter for Atlantic Monthly described him, is an enigmatic choice, particularly since Benedict resigned to make way for a pope with more “vigor” and “stamina.” The choice may raise more questions than answers about Benedict’s resignation.

At one time, the Jesuits would have hailed the first Jesuit pope as a crowning moment for an order founded out of papal zeal. They would have quoted St. Ignatius of Loyola and St. Francis Xavier on the need for a strong papacy. Instead, they seemed pleased that Bergoglio named himself after a Franciscan. Like the secular media, the modern Jesuits see St. Francis of Assisi as the patron saint of community organizing, even though by today’s standards his actual views would be regarded as militantly orthodox and he would have seen the conflation of the corporal works of mercy with specific left-wing political programs as mystifying.

Pope Francis makes history as the first pope from Latin America, where the faith is strong in numbers if receding. But perhaps more remarkable is that he is a Jesuit: Who would have thought a conclave, ostensibly searching for a reformer, would pluck him from one of the most troubled orders in the Church?

Some liberal Jesuits have apparently criticized Bergoglio, which is a good sign. But that may not mean much, since the order has grown so radical that even centrists within the order receive flak. Informed reports on where he stands on the theological spectrum within the order will likely appear in the next few days and fill out the picture.

If he is an orthodox reformer in the mold of St. Francis of Assisi and a missionary in the spirit of St. Francis Xavier, he will need to start close to home. The Jesuits have grown so worldly and heterodox that if St. Ignatius of Loyola were alive today he wouldn’t even be ordained into it. The Jesuit system of colleges and universities has gone from defending the faith to defaming it.

The focus on curial corruption seems to have deflected attention from this larger disease of bad theology, liturgy, education, and discipline, of which corruption and chaos at the Vatican are mere symptoms. Benedict took a stab at healing it, but the job remains largely undone.

One suspects the Catholic left is breathing a sigh of relief that his successor may have even less stomach for that task. On the finer theological and liturgical points, where the most consequential struggles within the Church are fought, Pope Francis is probably seen as an improvement over Benedict. A few spirit-of-Vatican II types have identified what they consider heartening quotes from past interviews, such as, “One does not remain faithful, like the traditionalists or fundamentalists, to the letter,” and, “It is true that going out onto the street implies the risk of accidents happening, as they would to any ordinary man or woman. But if the Church stays wrapped up in itself, it will age. And if I had to choose between a wounded Church that goes out onto the streets and a sick withdrawn Church, I would definitely choose the first one.”

The choice may prove even trickier than that, as the Church is both wounded and withdrawn and cries out for a St. Francis of Assisi and St. Francis Xavier.