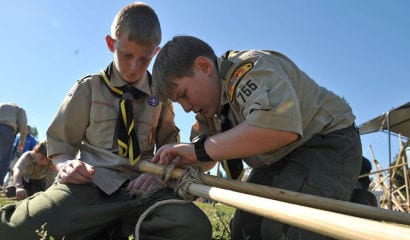 The Boy Scouts of America’s (BSA) National Council meeting in May will decide whether to abandon the BSA’s long-time ban on open homosexuality. Early last month, the BSA executive board, confronted by corporate threats to defund, had planned to proceed with a new policy of allowing sponsors of local Boy Scout troops to determine their own policy. Widespread protests, especially from church sponsors, who host 70 percent of Boy Scout troops, persuaded the BSA board, which includes several corporate CEOs pushing for a more permissive policy, to defer to the 1,400 member National Council.

Later in February, the leadership of United Methodist Men (UMM), which is the second largest religious sponsor of Boy Scouts, shifted from earlier statements indicating acceptance of a BSA local option and instead asked the BSA not to proceed with a policy change. The UMM noted having received “many phone calls and emails” since the BSA’s proposed policy change became public. Many threatened to quit BSA as leaders or donors if BSA adopted the proposed new policy, and many were “angry” that churches were not better consulted about the policy shift. The letter reports that a “few” expressed support for the policy change, but overall the response has been “overwhelmingly” negative.

“This potential shift from BSA places UMM’s primary goal, our core value — expansion and retention — at risk,” the UMM declared. “If approved, scouting programs would decrease, and new programs would be harder to begin due to the uncertainty this proposal has generated.” The UMM complained there had not been adequate time for United Methodist Men and churches to consider the “legal and spiritual consequences” of a BSA shift.

Unlike the Methodists, the Mormons, as the largest religious sponsor of Boy Scouts, have remained publicly silent though presumably privately disapproving of a policy change. Roman Catholics are the third-largest religious sponsor, and the head of their scouting ministries had carefully warned against a policy change before the February board meeting. The Southern Baptists, who are the sixth largest church host, have continued to be outspoken against any change.

Other pro-family groups have been collecting petitions and urging the BSA to stand firm. The Alliance Defending Freedom (ADF), which litigates in defense of religious freedom, has recently warned BSA that its proposed local option would potentially remove protection that courts have given BSA’s national policy. Absent a clear national standard, ADF warns, BSA would be vulnerable to litigation. “It is not legally necessary for BSA to sacrifice its history or its principles in the face of growing threats,” ADF told BSA in its appeal.

Meanwhile, BSA has emailed 1.1 million adults involved with Scouting a survey about the controversy, offering six theoretical scenarios absent the ban on homosexuality, soliciting reactions. First the survey asks respondents about their support for the current requirements that “prohibit open homosexuals” membership or leadership. And it asks if this policy is a “core value” of scouting as found in the Scout Oath and Law.

After the scenarios, the survey again asks the same questions about support for the BSA’s current policy. It also notes that “different organizations that charter Boy Scout troops have different positions on the morality of homosexuality,” and asks whether charter groups should be allowed to follow their own beliefs “when selecting Boy Scout members and adult leaders, if that means there will be different standards from one organization to the next.”

Is the survey biased towards pushing respondents against the BSA’s current policy, or does it accurately reflect the conflict? It’s debatable. But probably most respondents, as current or former participants in Scouting, either way will oppose a policy change. Southern Baptist leader Richard Land, in publicly defending the policy, has asked whether heterosexual men should be allowed to escort teenage girls on overnight camping trips. He cites frail human nature as constantly vulnerable to moral failure, hence protections are constantly needed against temptation, such as permitting homosexual men to lead Scout troops. Probably most BSA supporters, even in the current cultural climate of hyper tolerance, understand the core argument for the BSA’s current standard.

Beyond the Boy Scouts, at stake is whether any private organization beyond religious institutions shall be permitted by the current culture to uphold traditional sexual ethics. And ultimately are churches themselves, even if legally protected by the First Amendment, safe from hostility and growing intolerance against traditionalism? A lot may depend on whether the BSA in May and beyond is willing to forego some corporation donations and endure adversity in defense of not just its members but also all Americans standing against the increasingly oppressive sexual zeitgeist.