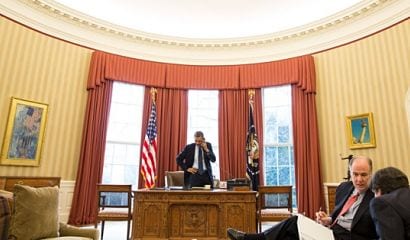 If President Obama’s rhetoric on domestic policy can be said to have a coherent theme, it involves his desire to use government to create a level playing field in which no single segment of the electorate enjoys unfair advantages or suffers disproportionate disadvantages in the pursuit of happiness. He is particularly concerned, he tells us, that the “rich” pay their fair share while poor and minority Americans receive their just due. Somehow, though, every policy decision made by his administration seems to tilt the playing field against the latter.

The latest example of this curious phenomenon can be found in the recent announcement by the Centers for Medicare and Medicaid Services (CMS) that it plans to cut an extra 2.2 percent from the Medicare Advantage (MA) program. This new cut, which came as a surprise to everyone except Obama’s health care commissars, will be added to the $200 billion in cuts Obamacare has already mandated for MA. What does this have to with low-income and minority seniors? The administration’s new Medicare cuts will come directly out of their pockets.

MA is a health coverage vehicle created for seniors as part of the Medicare Modernization Act of 2003. It permits private health plans to provide Medicare coverage to seniors and requires these carriers to compete with one another for the business of retired Americans looking for an affordable alternative to traditional fee-for-service Medicare. One of the ways in which MA plans compete is by offering comprehensive coverage that requires low out-of-pocket expenses, a feature that would obviously appeal to anyone on a modest fixed income.

It will come as no surprise, then, that every serious study of MA has shown the program to be increasingly popular among low-income and minority seniors. Unfortunately, the Obama administration’s surprise rate cuts amount to an old fashioned bait-and-switch. The MA plans are already taking a huge hit pursuant to Obamacare’s $200 billion cut, and they will be unable to absorb these newest slashes in the program without passing at least some of the costs to the patients in the form of increased co-pays and deductibles.

And it is by no means an exaggeration to say that these extra out-of-pocket costs will hit the seniors who can least afford them. America’s Health Insurance Plans (AHIP), a trade group to which many MA carriers belong, recently issued a report confirming that reality: “Sixty-one (61) percent of all minority (nonwhite) beneficiaries enrolled in Medicare Advantage in 2011 had incomes of $20,000 or less; 59 percent of African-American and 75 percent of Hispanic Medicare Advantage beneficiaries had incomes of $20,000 or less.”

Considering the percentage of Hispanic beneficiaries that will be affected, it is not surprising that the CMS announcement elicited a quick and unfavorable response from Senator Marco Rubio. And last Friday, a bipartisan group of more than 90 House members joined Georgia Democrat John Barrow and Louisiana Republican Bill Cassidy in demanding that CMS abandon the cuts: “This reduction in funding will leave many vulnerable seniors with fewer benefits, higher out-of-pocket costs, and in some cases the loss of their current MA coverage.”

It will indeed. As AHIP reminds us, “The Congressional Budget Office projects that the reform law’s payment cuts alone will result in three million fewer people enrolled in Medicare Advantage.” The group goes on to point out that Obamacare is already expected to increase the out-of-pocket expenses endured by MA enrollees: “Actuaries at Oliver Wyman estimate that the health insurance tax will result in seniors facing $220 in higher out-of-pocket costs and reduced benefits next year and $3,500 in additional costs over the next ten years.”

Why is an administration allegedly committed to “fairness” and preventing the evil Republicans from “ending Medicare as we know it” proposing such Draconian cuts? In addition to the President’s absurd belief that he can fix Medicare’s gigantic unfunded liability by such cuts, there is his capitalism “problem.” That MA has made successful use of free market competition is anathema to his socialistic view of economics and undermines his primary justification for imposing a government-run health care system on the country.

So, Medicare Advantage has to be slowly throttled to death, regardless of the harm done to the most vulnerable people in our society. If low-income seniors must pay higher Medicare deductibles, that’s just the breaks. If African-American and Hispanic seniors are herded back to traditional Medicare against their will, so be it. Obama’s CMS bureaucrats don’t put it that way, of course. Their announcement suggests they feel for their victims: “We appreciate that plans are facing several legislatively mandated changes affecting payment for 2014.”

They will, of course, “solicit comment on ways to modify requirements to improve opportunities for administrative efficiencies while improving delivery of care.” But, in the end, they will respond to such comments just as they responded to the avalanche of protests they received concerning the contraception mandate — they will disregard them. Obama and his apparatchiks believe they own the playing field, and they plan to tilt it until the nation has been fundamentally transformed.