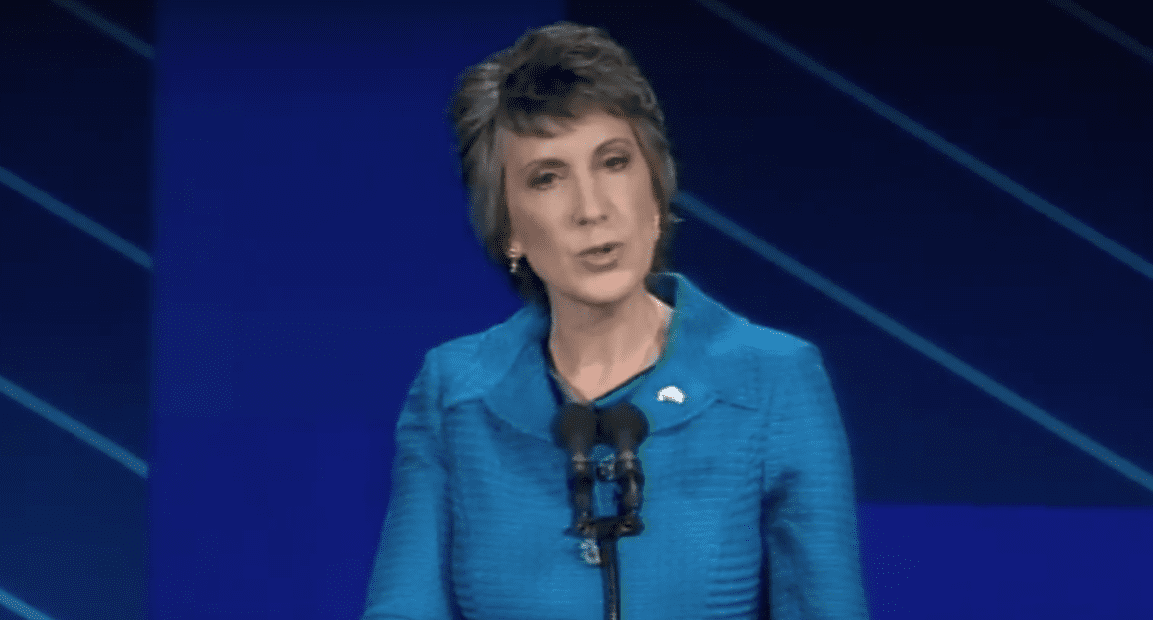 U.S. Senate candidate Carly Fiorina said at an American Spectator Newsmaker Breakfast this morning that her primary opponent, Chuck DeVore, could not beat Sen. Barbara Boxer in a general election because Boxer knows how to win against “white men.”

Fiorina focused her opening remarks on contrasting herself with Boxer, who she painted as a liberal Democrat who has not accomplished much during her three terms in office and has advanced tax, spending, and regulatory policies that have crippled California’s economy.

When asked what set her apart from DeVore, she said that they agreed on the issues, but that she wasn’t a career politician and she had a better chance of beating Boxer.

“He is an honorable man,” Fiorina said of DeVore. “He has every right to run. But he cannot beat Barbara Boxer.”

She continued, “With all due respect and deep affection for white men — I’m married to one — but [Boxer] knows how to beat them. She’s done it over and over and over.”

Diane DeVore, Chuck’s wife, responded on Twitter that, “Carly, I’m married to that ‘white guy’ & I can tell u he can win against mods and libs. Has record to prove it!”

Fiorina said her strategy was to “bang away at [Boxer’s] voting record, from which she cannot hide.” Fiorina also used the morning to expand on her beliefs on a wide range of issues including taxes, spending, the role of unions, and abortion. She also defended her record as CEO of Hewlett-Packard. Fiorina described herself as a fiscal and social conservative.

“I am pro-life,” Fiorina said. “I believe that life begins at conception.” She also said she supported the Stupak amendment in the House health care bill that bars women from using government subsidies to purchase policies that cover abortion.

I asked her to clarify her comments given that labels can mean different things to different people, and some who may describe themselves as personally pro-life may still believe that individual women should have the right to choose abortion.

“Well, that is the situation in the world today,” Fiorina responded. “That is reality. What I think about it is, I’m not sure, relevant to the job I’m seeking other than of course Supreme Court nominees, but the reality is that a woman can walk into Planned Parenthood today and get an abortion. Now, I believe we should all be working to limit the number of abortions, so in that sense, no I do not believe that everyone should have that choice. But they do today. I’m just trying to be realistic. That’s why I think this Stupak amendment is so important, and frankly, I think the debate the Stupak amendment has created is quite instructive about what the motivations mean behind some of these things. I believe that life begins at conception and I believe we must protect the rights of the unborn. And I believe that science continues to demonstrate that a fetus is viable at a younger and younger age, and I know, as a realist, that not everyone agrees with me. So the common ground that we can find is how to reduce abortions.”

Responding to a question about her position on U.S. Supreme Court nominations, she said that she “probably” would have voted to confirm Sonia Sotomayor because “elections have consequences” and “she seemed qualified.” Fiorina cautioned that she was dealing with her own breast cancer at the time and thus was not in a position to closely examine the judge’s record.

Fiorina said that she was opposed to bailouts and President Obama’s economic stimulus package. Instead, she said, she supports low taxes and spending, and described the nation’s debt as “unsustainable.”

In response to a question about the dominant role of public sector unions in her state, she said that “there is growing anger in California over the vice grip that unions have over the state.” She said that they have a disproportionate influence relative to the amount of workers they represent.

She said that she would bring an outsider’s perspective to Washington as somebody who had spent her business career balancing billion-dollar budgets. She defended her tenure at HP, saying that she managed to double the size of the company during a severe “tech recession,” and created jobs on a net basis. While she did outsource, she said it was only because California’s tax code makes it difficult to employ people in the state. Remarking on her ouster from the company, she argued that subsequent revelations that her successor was spying on her and other board members vindicated her.

She said she wasn’t too concerned about polls showing her within a point of DeVore, noting that her campaign was just starting and he’s been campaigning for 18 months, and the primary isn’t until June.

Asked whether she expected Sarah Palin to endorse a candidate in the race, Fiorina said she didn’t know. But she added, “I share Sarah Palin’s values.”

UPDATE: A DeVore spokesman emails to say he has been running for 12 months.