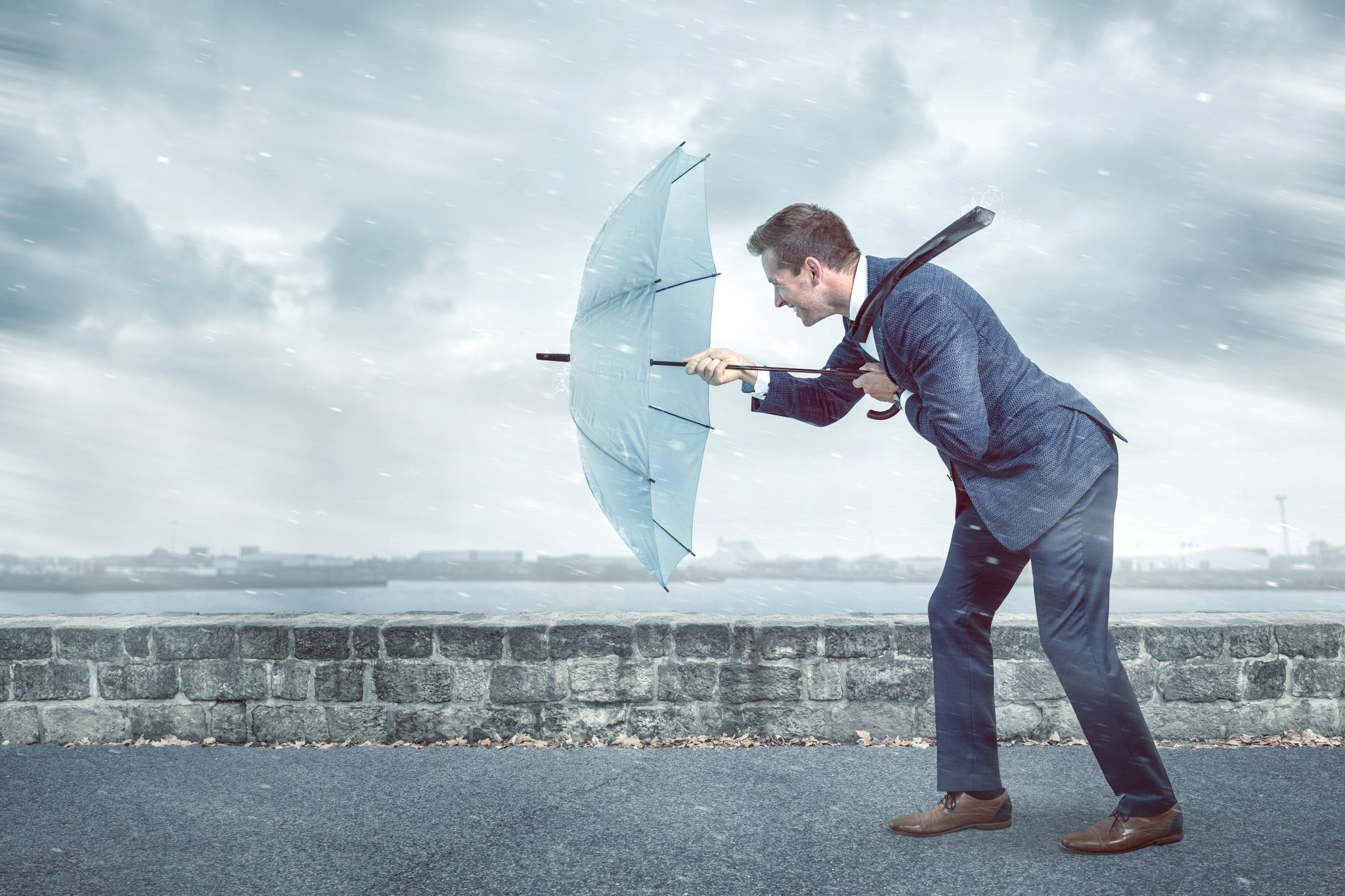 As Bob Dylan once famously wrote, “You don’t need a weatherman to know which way the wind blows.” I would venture to add that you don’t need mainstream media pundits either.

But it does help to have some data. And data suggest that winds may be starting to blow against the long-term Democrat hold on minority voters. Analysis of results from the 2020 presidential election suggests that the oft-repeated Democrat strategy of tagging political opponents as bigots and portraying minorities as victims in need of rescue (by Democrats, of course) may be wearing thin.

The data demonstrate that the Biden ticket consistently underperformed in northern state, metropolitan counties where the majority of the population is non-white or Hispanic, relative to Hillary Clinton’s 2016 vote percentage in the county as a benchmark. The dynamic duo of Biden and Harris realized their worst or near-worst performance in these counties compared to elsewhere in the same state. In most of these cases, Biden and Harris lost ground relative to Clinton’s performance in 2016.

And as is already well known, Biden and Harris got blown away in Florida, largely due to a massive outpouring of support for Trump from South Florida Hispanic voters. But not just in South Florida. For example, in smaller Osceola County near Orlando, which has a burgeoning Hispanic population, they experienced their next-to-worst performance in the state (after Miami-Dade).

A bit of election math

The change in the Democrat — or, conversely, Republican — Party’s statewide vote percentage between the 2016 and 2020 elections is composed of two, additive components. The first component, which usually accounts for nearly all of the change, is the weighted sum of within-county changes, whereby a county is weighted according to its share of 2016 statewide votes.

In my analysis I focus on the within-county changes in the Democrat party’s vote percentage in each individual county, leaving aside the weighting aspect (and also excluding fringe party candidates — restricting attention to just the Democrat and Republican candidates). This seems natural for investigating relationships between voting outcomes and voter demographics, because the within-county change reflects underlying voter sentiment, whereas the simple fact that a county has a large population does not.

The second component of the statewide change is an accounting of the effects of some counties increasing their share of total statewide votes relative to other counties. Such cross-county distributional shifts may alter the statewide vote total in favor of a particular party. Although such effects usually are not material (county shares of statewide totals generally are stable), I note a few exceptions in my discussion below.

The charts below display the within-county change (2020 versus 2016) in Democrat party vote percentage for each New York county, with counties ranked in order of increasing within-county change. The orange-shaded bars represent metropolitan counties with majority non-white or Hispanic population according to the latest (2019) U.S. Census population estimates. These are the New York City boroughs of Bronx, Queens, Brooklyn, and Manhattan.

Completing the list of New York counties where the Democrat Party’s vote percentage declined are St. Lawrence (-4.2), which has less than 10 percent minority population, and Rockland (-2.4). St. Lawrence is in Republican Rep. Elise Stefanik’s district and has solidly supported Donald Trump since 2016. Rockland, while classified as majority white and non-Hispanic, has a distinctive demographic makeup — a large Jewish population (about a third of the county population) comprising various Hasidic groups, as well as substantial African American (13 percent) and Hispanic (18 percent) concentrations.

Apparently, the mainstream media’s nasty portrayal of President Trump as a catalyst of “white supremacist” activity did not resonate among residents of either the New York City boroughs or Rockland County.

Bronx and Manhattan also proved exceptional in that their shares of the statewide vote total declined between 2016 and 2020 (to 5.0 percent from 5.3 percent, and to 8.1 percent from 8.7 percent, respectively) due to weaker turnout in 2020 compared to the rest of the state. Given the traditionally very high Democrat vote percentage in these counties, the relatively weak turnout cut about three-fourths of a percentage point off the Democrat statewide percentage.

In Maryland, three of the four weakest performances for Biden and Harris are in counties with majority non-white or Hispanic populations. These are Prince George’s, Baltimore City, and Montgomery, where the Democrat Party’s vote percentage declined 0.2, rose 0.2, and rose 1.1 percentage points, respectively.

Biden and Harris had their worst performance in rural Somerset County, on the eastern shore of the Chesapeake Bay, as indicated by a 1.5-percentage-point decline in the Democrat vote percentage. Somerset has only a slim majority white non-Hispanic population (51 percent). Its demographic composition is distinguished by a large number of African Americans (41.5 percent), which is anomalous for the eastern shore region and other rural areas of Maryland.

These four counties also proved exceptional in that their shares of statewide vote totals declined between 2016 and 2020 (in the range of 0.3 to 0.9 percentage points) due to weaker turnout compared to the rest of the other counties. Given the traditionally very high Democrat vote percentage in these counties, the relatively weak turnouts in 2020 reduced the Democrat statewide percentages (in the range of 0.3 to 0.8 percentage points).

Notably, the next-to-worst performance for Biden and Harris in Massachusetts (a mere 0.2 percentage point gain) was in Hampden County, part of the Springfield metropolitan area. Hampden has the largest Hispanic population percentage (26.3 percent) and the second-largest non-white or Hispanic percentage (38.6 percent) in the state. 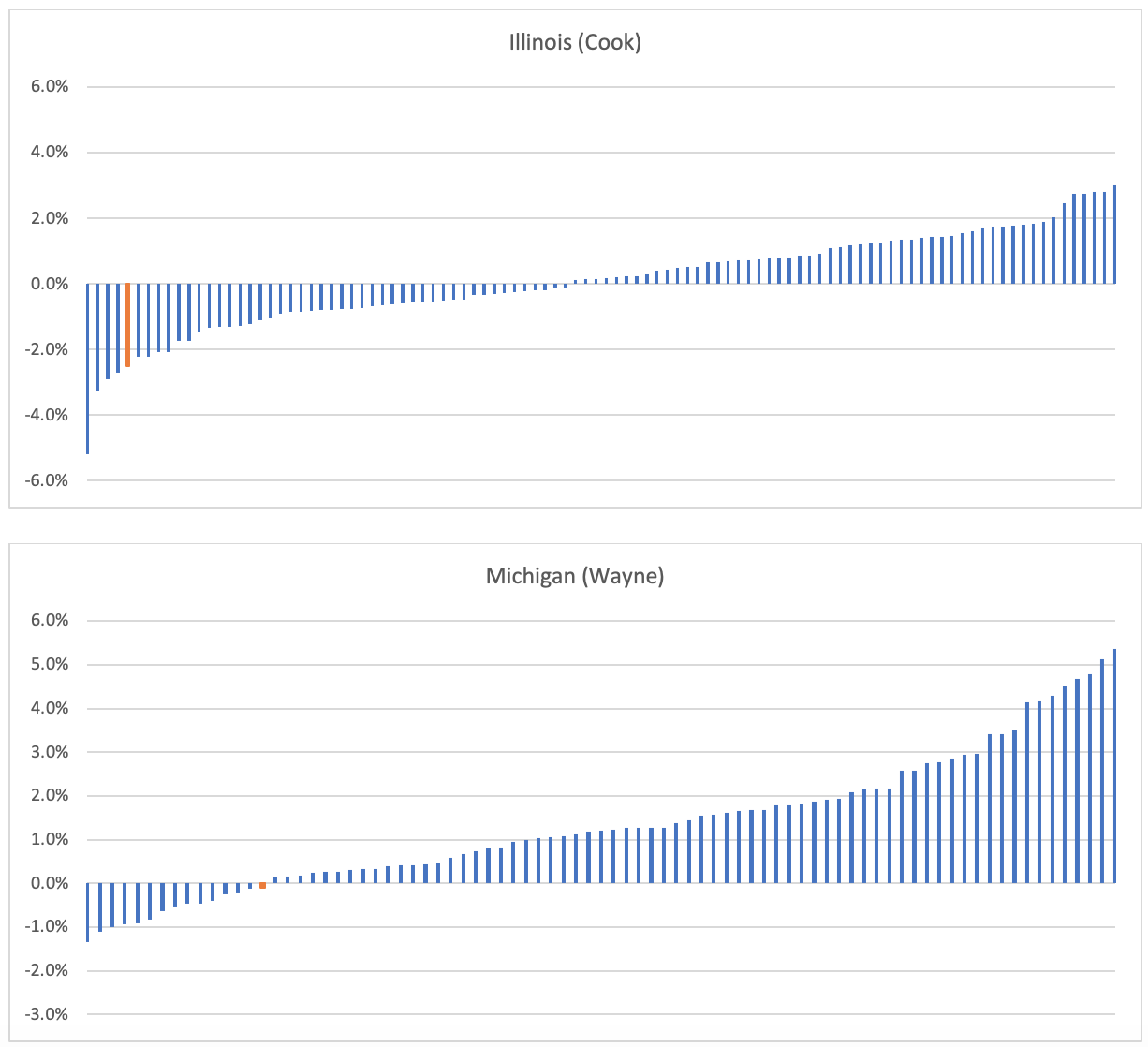 In Florida, the winds blowing against Biden and Harris in predominantly minority counties reached near hurricane strength. As shown in the chart below, in every county that is majority non-white or Hispanic (metropolitan or not), the Democrat Party’s vote percentage declined between 2016 and 2020. These counties, again indicated by orange bars, are Miami-Dade (-11.4), Osceola (-6.0), Hendry (-4.3), Broward (-3.0), Hardee (-1.8), Gadsden (-0.7), and Hillsborough (-0.1).

Four of the five weakest performances for the Biden and Harris ticket in Florida are in these counties. The county where they exhibit their worst performance, Miami-Dade, has a population that is 69.4 percent Hispanic and just 12.9 percent white non-Hispanic. Osceola and Hendry counties, which provide Biden and Harris with their second- and third-worst performances, are majority Hispanic. (Osceola, incidentally, is where Biden tried to pander for votes with his embarrassing Despacito dance stunt.)

Democrats are very attuned to climate change, and they’re especially quick to accuse doubters of being climate change deniers. But perhaps Democrats are in denial about the shifting political winds blowing through minority communities.

Among minority voters, Democrat rhetoric and policies seem to be increasingly recognized as paternalistic if not outright damaging. Opening up the southern border to mass illegal immigration, undermining law enforcement, embracing “critical race theory” and other contrived and needlessly divisive viewpoints, and so forth, are likely to further erode support from these voters.

A political storm may be brewing that, by 2024, could strike with full force. To paraphrase Bob Dylan: “The votes they are a-changin’.”