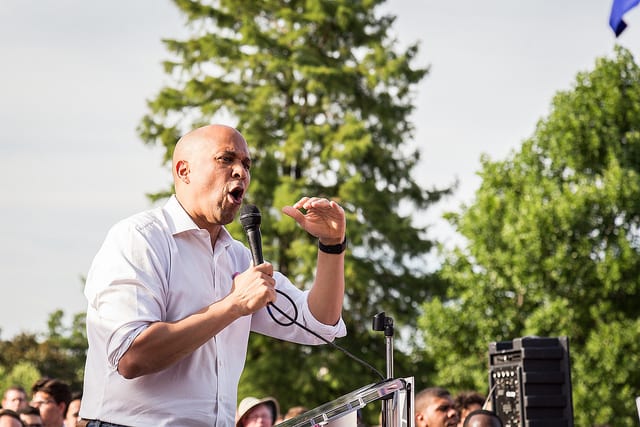 Emboldened by the noise from the crowds that followed Bernie Sanders around in 2016, more and more Democrats have drifted far leftward and begun embracing the wild progressive fantasy that masquerades as policy. Three of the names most often mentioned to run in 2020 — Bernie Sanders, Kamala Harris, and Elizabeth Warren — are all from the Democrats’ lunatic progressive fringe and have been pushing single-payer government healthcare as a mainstream idea.

NPR reports that many of the names who might end up in the 2020 hat have another feel-good progressive idea they’re fond of:

No major candidates have declared that they’re preparing a run against President Trump in two years, but whispers are building around potential candidates. A few of them have coalesced around a seriously ambitious policy idea — guaranteeing a job for every American who wants one.

If enacted, such a program could be big or small; it could create massive reverberations in the private sector; and it could reshape monetary policy. One thing that is more certain is that Americans will be hearing about the idea of job guarantees for the next few years.

This article really is an extraordinary read, from the odd justifications for believing now is the time for pitching ideas like this, to the fantastical nature of the proposed programs themselves.

Unsurprisingly, NPR first talked to a progressive academic, who gave this reasoning for the timing:

“My impression is it may have been the shock effect of Trump’s election and the recognition that there are a host of policies, projects, that we previously didn’t think were imaginable or reasonable that are being considered on the other end of the political spectrum,” said William Darity, an economist at Duke University and a proponent of job guarantee programs.

It has been well documented that the Democrats lost votes in the Heartland because under and unemployed people were tired of Democrats making promises to them and not coming through. Only an insulated academic and Beltway progressives would come to the conclusion that the solution to that problem is to make bigger, even more untenable promises and make them so loudly that no one can voice an objection. If there is one thing that Bernie Sanders proved in 2016 it’s that crowds don’t care about details if you are promising them free everything.

As with all things progressive, this is really about a massive expansion of federal power and making people dependent on the government, just in a less demeaning way.

Darity is one of the architects of the jobs guarantee bill Cory Booker is floating in the Senate. Here is his elevator pitch for the program:

“Under the conditions of a federal job guarantee, everybody would be assured of getting to work if they were seeking work. So in effect, the unemployment rate would be zero,” said Darity. “In an ideal world, if I lost my job in the morning, I could walk over to what we would now truly call an employment office and have new work by the afternoon.”

In an ideal world, I could drink beer all day, get my work done, and never get drunk or fat.

Read this gem from Darity and you’ll understand why I stopped talking to progressives a long time ago:

“The idea is that we would then drive bad jobs out of existence,” said Darity, “because no one would be obligated to take those jobs since they would have a superior option.”

Are all of the public restrooms going to clean themselves under this program? Or do those jobs get reclassified as “good” because they come with a higher wage?

The bigger question is this: what kind of adult talks like that?

Former Congressional Budget Office Director Douglas Holtz-Eakin broke down a few of the problems with the program, chief among them being this:

you’re not just going to get people who have been unable to find work in the private sector for whatever reason,” said Douglas Holtz-Eakin, a former director of the Congressional Budget Office and president of the right-leaning American Action Forum. “You’re going to get a lot of people. And a lot of people means a lot of money, so the federal budget is going to explode.”

Holtz-Eakin offers more specifics about why this isn’t a good idea, and that’s one thing that makes combating progressive ideas so wearisome. They offer the moon, their swooning fans think, “Yay, the moon!” and then non-progressives have to come in and explain that the moon isn’t available using facts.

Still, the effort has to be made.

Even Darity admits that his ideas haven’t always been accepted by mainstream Democrats.