In 1903, the Atlantic printed the thoughts of the Rev. Dr. Lyman Abbott on why women widely did not, and should not, want the right to vote:

In this work of direct ministry to the individual, this work of character-building, which is the ultimate end of life, woman takes the first place. The higher the civilization the more clearly is her right to it recognized. She builds the home, and she keeps the home. She makes the home sanitary; she inspires it with the spirit of order, neatness, and peace; she broods it with her patient love, and teaches us to love by her loving. Her eye discerns beauty, her deft fingers create it, and to her the home is indebted for its artistic power to educate.

On March 6, 2020, the Atlantic published an essay by Ellen O’Connell Whittet titled “I Voted for Warren, My Husband Voted for Sanders, and I Feel Betrayed”:

I just wish voting for a progressive woman didn’t feel like a once-in-a-lifetime chance, so rare that it would cause me to silently fume at my own husband for making a different decision…. What is unfamiliar is the loneliness I feel in my grief, something I haven’t been able to share with the person closest to me, because of the different choices we made this time.

(Aside to Ms. O’Connell Whittet: your fuming is not exactly silent.)

I cite these essays not to say that the anti-suffragists had a point, but rather to show that the ironies of history are as inevitable as death. The handful of exhibitions mounted at art museums around the country to recognize the centenary of the Nineteenth Amendment threatens to unleash a plague of such ironies.

The main culprit here is the Baltimore Museum of Art (BMA), which has twenty-two exhibitions concentrating on women artists and has pledged to purchase art only from women artists for all of 2020. Irony No. 1 is that the move provoked revulsion from the very people it was designed to please, as reported by Kriston Capps for CityLab. Leftist critics chastised the program as inadequate, tokenistic, instigated by a man (that would be BMA director Christopher Bedford), insufficiently attentive to “Latinx, Native, and trans artists,” and evasive of the “self-critical reflection necessary to interrogate the structures of power.”

I avoid Baltimore even apart from a pandemic-prompted advisory against travel. But I did get to see “Women Take the Floor” at the Museum of Fine Arts, Boston (MFA), before the Wuhan virus forced its temporary closure. This exhibition was likewise timed to mark the hundredth year of women’s suffrage in the United States. Irony No. 2 is that women’s right to vote ought to be cause for celebration, but the mood in “Women Take the Floor” is as festive as appendicitis. The exhibition greets visitors with a dire tone. The curators describe it as a “takeover” of the third floor of the Art of the Americas wing. The installation sports a sans-serif typeface and sharp-edged graphics in a red-on-white scheme that evokes emergency. It is as if the whole show is trying to tell you where to locate a fire extinguisher.

Adding to the ambience of calamity, a video of current Boston Poet Laureate Porsha Olayiwola, turned up to hit-the- back-of-the-house volume, plays her recitation of a poem commissioned specially for the show. She delivers it in a voice that makes me relish poetry readings as much as dental cleanings, with that accusatory, stentorian schmaltz that some of poetry’s practitioners employ even when they’re talking about breakfast. The speaker of “what is the suffrage movement to a blk womyn? an anthem” (sic throughout) promises, “Pass me the torch. And the laws burn to the ground.” Later, she proclaims, “I unsign the declaration.”

Hence Irony No. 3: the exhibition notes a proud milestone of American history with a parade of anti-patriotism. America deserves recognition as a forward-thinking country, blessed with a sense of common purpose, in which unconditional enfranchisement was achieved relatively early in the history of suffrage. Many American states, particularly in the west, implemented suffrage along with their very establishment, long before 1920.

America’s comportment in regard to women’s suffrage was far from perfect. But whose was? Key players in the women’s suffrage movement itself sometimes shrank from noble goals and rallied behind dubious ones. Susan B. Anthony and her circle refused to support any constitutional amendment that enfranchised blacks but not women. She and noted suffragette Elizabeth Cady Stanton founded a temperance society. The Nineteenth Amendment was enabled not only by the Thirteenth, Fourteenth, and Fifteenth Amendments, but the Eighteenth, as well. The topic would seem to call for some circumspection.

On the contrary, “Women Take the Floor” disdains all the good people, men included, and whites included, who wanted women and people of color to flourish in the arts and so acted accordingly. Take Elizabeth Catlett. Not every Catlett painting is a triumph, but she could be glorious, as she is in Sharecropper (1952, printed 1970). It depicts, in hand-colored linocut, a black woman wearing a straw hat, gazing into the distance. Her shirt is closed with a safety pin, but her expression is regal. Catlett denotes the texture of the hat brim with studied appreciation. 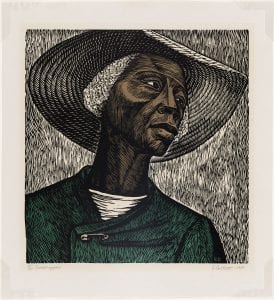 The wall label mentions Catlett’s move to Mexico as a place that better encouraged black artists like herself. It does not mention that she got her start at the University of Iowa learning to make paintings and prints, and receiving important early encouragement, from Grant Wood. (Wood is known for his iconic 1930 painting American Gothic, the veritable Mona Lisa of American Regionalism.)

So Irony No. 4 we might call the Romantic Myth of the Underrepresented Artist. Historians who have come to discount the notion of the artistic genius working in isolation, laboring alone in his garret to reinvent the genre, nevertheless apply the same atomic approach to the achievements of representation accomplished by artists like Catlett. In truth, the normalization of women of color in American creative life owes its success to Wood and many unrecognized sympathizers.

The politics of today’s art world make that recognition impossible. What is possible, maybe even obligatory, is to mount all-woman shows and highlight the ways in which the artists experienced episodes of sexism and related prejudices. Another label relates an anecdote from Lee Krasner about Hans Hofmann. During a class in his studio, he said of one of her paintings, “This is so good, you would not know it was done by a woman.”

It’s true that Hofmann, born in Bavaria in 1880, was not much of a feminist. But he counted many women as students and taught Krasner to paint abstractly. This quote dates from 1937, and she worked with him for another three years. One could elect to look at the bigger picture, which favors his good side.

Irony No. 5 is that so much of the art in this exhibition is second-rate. The label describing Hofmann’s quip hangs next to the worst Lee Krasner that you’re ever going to see in your life. Sunspots (1963) is an accumulation of yellow and orange daubs that barely registers as a painting. Putting it in the same room as a magnificent Helen Frankenthaler, Floe IV (1965), is like arranging a fight between Tyson Fury and Greta Thunberg.

The thinness of the MFA’s holdings of modernism would ensure that a two-hundred-object show of art made from 1920 to 2020 by American men would also feature plenty of duds. But one can’t help but notice how quickly the work drops off after Frankenthaler, Catlett, the striking 1973 portrait of art historian Linda Nochlin by Alice Neel, the bronze Striding Amazon (1926 and 1980, cast in 1981) by Katharine Lane Weems at the entrance, the lovely but disparagingly installed wire sculpture by Ruth Asawa, and the ceramics by Gertrud Natzler.

Even works I’ve respected on previous viewings are not holding up in this context. Laura McPhee’s stagey 2004 portrait of a girl displaying a hen evinces how the trendlet of life-size, full-length Cibachrome portraits is aging prematurely and ungracefully.

Grace Hartigan’s Masquerade (1954) justifies the critical neglect that she suffered when she switched from abstraction to figuration in the 1950s. Frida Kahlo, particularly as represented by Dos Muerjes (Salvadora y Herminia) (1928), is not a great artist. Georgia O’Keefe, I’m beginning to suspect, is not even a good one. Much of the rest of the show is simply unmemorable. 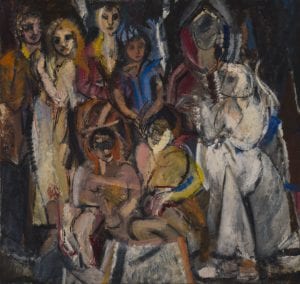 Irony No. 6 is that this wildly ambitious project accomplishes so little.

The museum sets out to “acknowledge and remedy the systemic gender discrimination found in museums, the galleries, the academy and the marketplace,” “[explore] art and suffrage,” “[recognize] that past feminist movements … were not inclusive or immune from systemic racism,” and “[look] at 20th-century American art through the lens of modern-day feminism — which advocates for equity and intersectionality” — all at once.

In a sense, “Women Take The Floor” does represent an emergency — one of belief regarding the ultimate worth of an art museum. It’s possible to share the sentiments implied in the above list of goals, yet sense that the art displayed in their name has been subtly wronged, and to feel wronged along with it. An exhibition is not a lecture. Art exists for its own reasons and won’t be ordered around like a soldier, no matter how lofty the commands.

Lyman Abbot’s essay has aged badly. But he loved people for who they aspired to be. The contemporary inclination, in contrast, is to condemn people for what they should have done — see Ellen O’Connell Whittet on her husband’s primary vote. That inclination makes people into a continual source of woe.

Abbot also grasped that works of beauty could instruct silently, by their very example. On the contrary, certain curators at the MFA and BMA (though they are hardly the only ones) use art objects as vehicles for messages. This essentially turns works of art into puppets. More enfranchisement of any kind is better, in the abstract. But what good is an increase of representation if it means only a greater share of a crisis of purpose?

Franklin Einspruch is an artist in Boston.