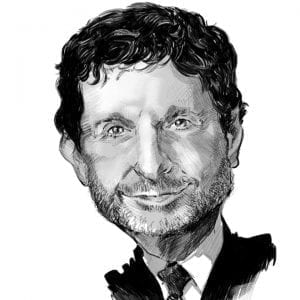 Dov Fischer
Rabbi Dov Fischer, Esq., is Vice President of the Coalition for Jewish Values (comprising over 2,000 Orthodox rabbis), was adjunct professor of law at two prominent Southern California law schools for nearly 20 years, and is Rabbi of Young Israel of Orange County, California. He was Chief Articles Editor of UCLA Law Review and clerked for the Hon. Danny J. Boggs in the United States Court of Appeals for the Sixth Circuit before practicing complex civil litigation for a decade at three of America’s most prominent law firms: Jones Day, Akin Gump, and Baker & Hostetler. He likewise has held leadership roles in several national Jewish organizations, including Zionist Organization of America, Rabbinical Council of America, and regional boards of the American Jewish Committee and B’nai B’rith Hillel Foundation. His writings have appeared in Newsweek, the Wall Street Journal, the New York Post, the Los Angeles Times, the Federalist, National Review, the Jerusalem Post, and Israel Hayom. A winner of an American Jurisprudence Award in Professional Legal Ethics, Rabbi Fischer also is the author of two books, including General Sharon’s War Against Time Magazine, which covered the Israeli General’s 1980s landmark libel suit. Other writings are collected at www.rabbidov.com.
Follow Their Stories: Get Notified
Daily Folios and Consecutive Sentences
Lessons From Living With a Lung Transplant
by Dov Fischer | Oct 1, 2022

Although I disclosed in my last article in The American Spectator that I had a serious health matter pulling me away from writing regularly — in the meantime, temporarily, just for a limited time only — I chose then not to elaborate….

Daily Folios and Consecutive Sentences
A Bit About Me and My Recent Absence and Stuff
by Dov Fischer | Aug 28, 2022

A newcomer to town attended daily Mincha minyan (Judaism’s mandatory afternoon prayers) at his shul but mysteriously always would rush away a few minutes later, right before the Maariv (mandatory evening services) would begin. Members of the congregation bad-mouthed him…

Daily Folios and Consecutive Sentences
The Saddest Day in the Jewish Calendar
by Dov Fischer | Aug 4, 2022

Nearly three weeks ago, I wrote of the saddest period in the annual Jewish calendar. This Saturday night and Sunday will mark the apex of tragedy. It is the Ninth Day of the Hebrew month of Av — better known…

Democrats have been in conniptions ever since Mitch McConnell and Donald Trump, carefully abiding by the letter of the law, changed the direction of the United States Supreme Court. After a series of rulings overturning Roe v. Wade, enhancing gun…

Daily Folios and Consecutive Sentences
The Three Saddest Weeks in the Jewish Calendar — and Why Jerusalem Will Never Again Be Divided
by Dov Fischer | Jul 17, 2022

Abu Mazen (also known as “Mahmoud Abbas,” the octogenarian Arab terrorist in a suit) just met with Joe Biden. Abu Mazen has been leading the “Palestinian Authority” in Judea and Samaria ever since Arafat died. Besides being a terrorist, Abu…

Daily Folios and Consecutive Sentences
On the Wisdom and Sensitivity of Dr. Jill Biden and Dear Uncle Joe
by Dov Fischer | Jul 13, 2022

First, a total non sequitur about British food. It is remarkable that a nation of such historic consequence has contributed so little to cuisine except for fish and chips. On any given night, people are saying things like “I’m really…

There are approximately one million Orthodox Jews in the United States. The main group of Orthodox rabbis speaking on public policy matters is Coalition for Jewish Values. It speaks for 2,000 — two thousand — American rabbis. The largest collegial…

Under God
Some Reasons I Believe Firmly in G-d — and Core Aspects of My Faith
by Dov Fischer | Jul 6, 2022

Because my several thousand readers in The American Spectator seem mostly to be devout Christians (although rumor has it that Jews read me, too, as do agnostics and even anti-Semites), I present herein more universal thoughts rather than purely Judaic…

Now let me be certain I understand this correctly: 1. Women whom we used to call “Soccer Moms” now are White suburban Karens who register as Independents. 2. She/Her/Hers. 3. In plural: They/Their /Theirs. 4. Not to be confused with…

Daily Folios and Consecutive Sentences
When the Fetus Has More Brains Than the ‘Pro-Choice’ Demonstrators
by Dov Fischer | Jun 26, 2022

PART ONE: PHONIES AND HYPOCRITES Show me a “pro-choice” demonstrator, and 95 (or more) out of 100, I am looking at someone who: – Opposes allowing parents the free choice to utilize their government school vouchers for their unaborted children…