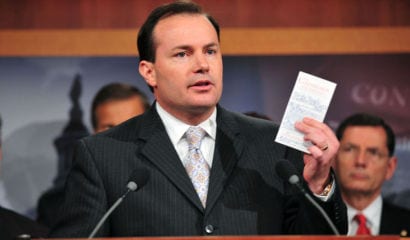 Two weeks ago, the House of Representatives Appropriations Committee voted to strip the scandal ridden Internal Revenue Service of nearly one quarter of its 2014 budget as punishment for its targeting of political groups and its costly boondoggles. Shockingly, Senate Democrats voted to increase the IRS’s budget.

Last week, numerous Republicans in both houses of Congress threatened to cut off all funding for the federal government as of October 1, in response to President Obama’s unconstitutional stance that he can pick and choose which parts of Obamacare he will implement.

On July 3, the Obama administration disclosed that it would not implement Obamacare’s employer mandate on January 1, 2014, though the law says the mandate “shall” go into effect that day. The administration pretended it was no big deal. But it violates the law and affects 10 million currently uninsured or underinsured workers whose employers would have been subject to the mandate. The cost of insuring these workers is shifted from employers to taxpayers, who foot the bill for subsidized insurance on the new Obamacare exchanges. At an average cost of $5,290 per subsidized enrollee, according to the Congressional Budget Office, this will add billions to the cost of Obamacare next year alone.

Two days later, another whopper. On July 5, the Obama administration revealed that it would also skip the health law’s requirement that applicants seeking taxpayer subsidies to pay for their insurance have their income and insurance eligibility verified. Welcome fraudsters, too bad again for taxpayers.

President Obama does not have the authority to choose which parts of the law are enforced. In 1975, the U.S. Supreme Court ruled unanimously against President Richard Nixon’s inflated claims that he could selectively carry out the law. But going to court to keep presidents in line is slow and necessitates finding litigants to sue the president. The framers gave Congress a more practical way to resist a power-hungry president: defunding. Defunding is precisely what members of Congress are supposed to do when a president breaks the law. It’s checks and balances in action. Two centuries ago, the chief architect of the U.S. Constitution James Madison declared in Federalist No. 58 that Congress’s authority over spending is the “most complete and effectual tool” to stop a president from grabbing more power than the Constitution allows.

Utah Senator Mike Lee is taking a page out of Madison’s playbook. On July 17 Lee urged Congress to vote against any continuing resolution to fund the federal government after September 30 so long as it funds Obamacare. “Laws are supposed to be made by Congress, not…[by] the president, who has now amended Obamacare twice. Once by saying individuals have to comply with the law during their first year but employers don’t. Then in saying we aren’t even going to require people to prove their income.” Lee said that if the administration is not prepared to fully enforce Obamacare as enacted, it should agree to delay the entire law and remove its funding from the budget. Eleven fellow Republican Senators and at least 60 Republican House members have signed on to Lee’s defunding stance.

Lee’s constitutional case is air tight. Yet the Democratic Party and Obama’s supporters in the media are trying to label the defunding strategy “government sabotage,” “radicalism,” and “obstructionism.” They need a refresher course on the Constitution.

Sadly, some Republicans are whining about the political consequences if Obama calls their bluff and allows the government to run out of money. “They’re going to shut down the Grand Canyon,” Arizona Senator John McCain warned, and he’ll hear about it from unhappy voters. Several senators who originally signed on with Lee saw the political risk, lost their nerve, and removed their names. Sen. Richard Burr (R-N.C.) even called withholding funding “the dumbest idea I’ve ever heard.”

There is nothing dumb about protecting the Constitution. Members of Congress took an oath to uphold it. If not now, when? The more times this president is permitted to trample the Constitution, the more freedom we’ve lost.