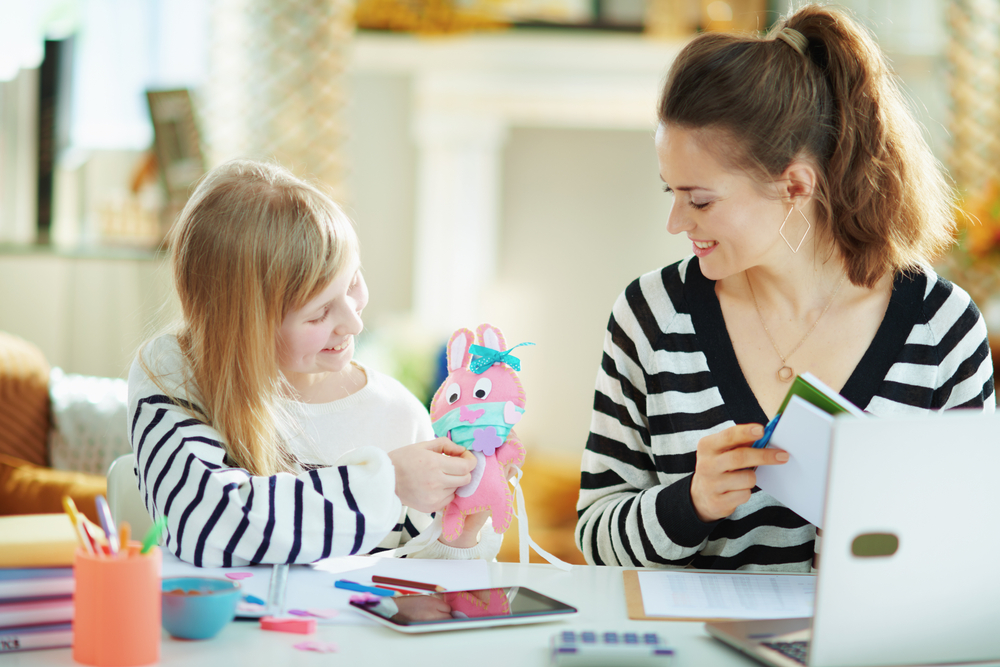 When schools across the country shut down last March, Hannah Haller found herself at home. Haller, a 26-year-old newlywed who had been a part-time assistant at a preschool in Saginaw, Michigan, had nowhere to go. And she loved it.

“I realized not being at work made me so much happier,” she says. “I got to make more food from scratch. We got chickens.”

Almost one year into the pandemic that shut down American life as we know it, more than five million women have lost their jobs. Some have been laid off. Others, like Haller, have quit.

By summer 2020, Haller realized that she enjoyed life more than she had been at the preschool, following a set schedule and corralling other people’s children throughout the day. She decided not to go back to work, and that decision seems permanent.

Her schedule is free, and she’s also released from the pressure of impressing acquaintances with her employment status. “You’re not seeing people as much, so I was less scared to tell people I’m not working anymore,” she says. “I don’t have to have a job. That’s not a requirement. Why would I try to do a job that I don’t love?”

Not every household is lucky enough to survive on a single income, but for those that are, Haller’s story might reflect a broader trend. As millions of women have lost their jobs during the pandemic, some of them are not going back.

In January, women’s employment hit a 33-year low. After years of feminist messaging, “Girlboss” corporate marketing, and books like Sheryl Sandberg’s Lean In, plus the proliferation of dual-income households, women had hit a milestone in early 2020: They outnumbered men in the workforce for the second time ever. Working 50.04 percent of U.S. jobs, women had a slight edge.

Then came coronavirus. By the end of the year, women accounted for the majority of unemployment numbers. Their participation in the labor force is now the lowest since 1988. Some 2.3 million have left the labor force entirely, compared with just 1.8 million men. Last month, the U.S. unemployment rate was slightly down at 6.3 percent, compared with 6.7 percent the month before. This could mean that men (and women) are getting back to work, but it could also be partially explained by the number of women who are no longer looking for jobs.

When the economy tanked, men were losing jobs too. Why was it worse for women?

First off, women are more likely to work in leisure, hospitality, and retail industry jobs (waitress, cashier at the department store, nail technician), which the pandemic shut down in many more cases than, say, white-collar jobs.

And schools closed. Then they stayed closed (many of them, anyway). More likely than men to be primary caregivers, many women have opted to scale back to part-time work or quit their jobs to help their children with online learning or homeschooling.

“The interaction of high rates of layoffs in occupations that employ women and extended in-person school and childcare closures may have long-run impacts on maternal labor supply, especially in a situation in which grandparent care has become more dangerous,” reports the Bureau of Labor Statistics (BLS).

In fact, one in four women say the decision to slow down or quit entirely will be permanent for them.

A study cited by the BLS found that among dual-earner, opposite-sex married couples with school-aged children, women reduced their work hours two hours per week on average, while men didn’t reduce theirs at all. This isn’t necessarily about sexism or gender roles, though. It makes financial sense considering the man still out-earns the woman in the average dual-income couple.

Laura Vanderkam, an author and productivity expert, emphasizes that for women who want to drop out or stay home to be with their families, that’s a great decision. But they shouldn’t feel like they must stop working simply because they can’t perform at their best. “When you take time out, you lose a lot of your earning potential,” she warns. “The decision to exit the workforce has profound implications for long-term financial stability.”

And what if the woman who has dropped out of the workforce wants to go back?

“The first thing that needs to happen is kids need to get back to school,” says Vanderkam. “For many families, school has been de facto childcare. COVID changed that entire bargain and plan that families had made.”

President Biden, who has flip-flopped on his school reopening plan, now says he wants most K-8 schools open for in-person instruction throughout the week. But as teachers unions lay more and more demands on top of their requirements for reopening, the horizon for a return to in-person schooling seems to be rapidly disappearing for parents in many school districts.

Other politicians are looking to support families in different ways. Sen. Mitt Romney recently proposed replacing the child tax credit with a monthly cash allowance of up to $350 per child. His budget-neutral Family Security Act could incentivize families to grow — and help mothers have the income to choose whether to rejoin the workforce or pay for child care.

Even if this isn’t the policy proposal we need, we certainly need more big ideas like it. “There’s been less of a family-friendly emphasis on the right side of the political spectrum even though that’s the side that’s pro-family in terms of wanting people to have bigger families,” notes Vanderkam.

The Left, too, has been worrying over women’s labor numbers since they first started to dip, but it offers a different diagnosis.

An article in Cosmopolitan rebuked Biden for his “unity” message, arguing that it won’t do enough to extinguish systemic inequality. “There is no ‘togetherness’ if those in positions of power continue to perpetuate the status quo when working moms are being pushed out of the workforce at disproportionate rates, thanks in no small part to the persisting inequalities that exist inside the home,” the author writes.

In an article for The Cut, another writer quips, “Can we unionize mothers?”

Beyond Romney and his child-care plan, politicos on the right don’t seem as interested in creating solutions that could address the problems of working mothers. Why aren’t more conservatives raising the alarm about women leaving the workforce?

Theoretically, the number of women dropping out of the workforce itself is not cause for alarm, because for the Right this isn’t about quotas. There’s no reason to say we need more women in the workforce than men, or vice versa (though that may ruffle some progressive feathers). We have to look past the numbers and ask why women are making the decisions that they are and whether they would be making different decisions if they could.

The Left will argue that women dropping out of the workforce means sexism has prevailed. The truth is, as always, that it’s much more complicated. Women always knew they couldn’t “have it all,” and the coronavirus pandemic has made this crystal clear.

There are women like Haller who have used the pandemic as an opportunity to quit jobs that don’t bring them joy. There are mothers who are scaling back to take care of their children during the day and loving it. There are mothers who are doing the same thing and, in the words of the Bing Crosby classic, “can hardly wait for school to start again.” All of these women need support in different ways.

Family and friends, the business world, and the ecosystem of conservative think tanks and politicos all now have an opportunity to address this issue in a real way, one that supports women and their goals (and therefore a family’s financial stability) as well as women and their children (and therefore the strengthening of the family).

There are so many good options. The worst thing we can do is not pay attention.