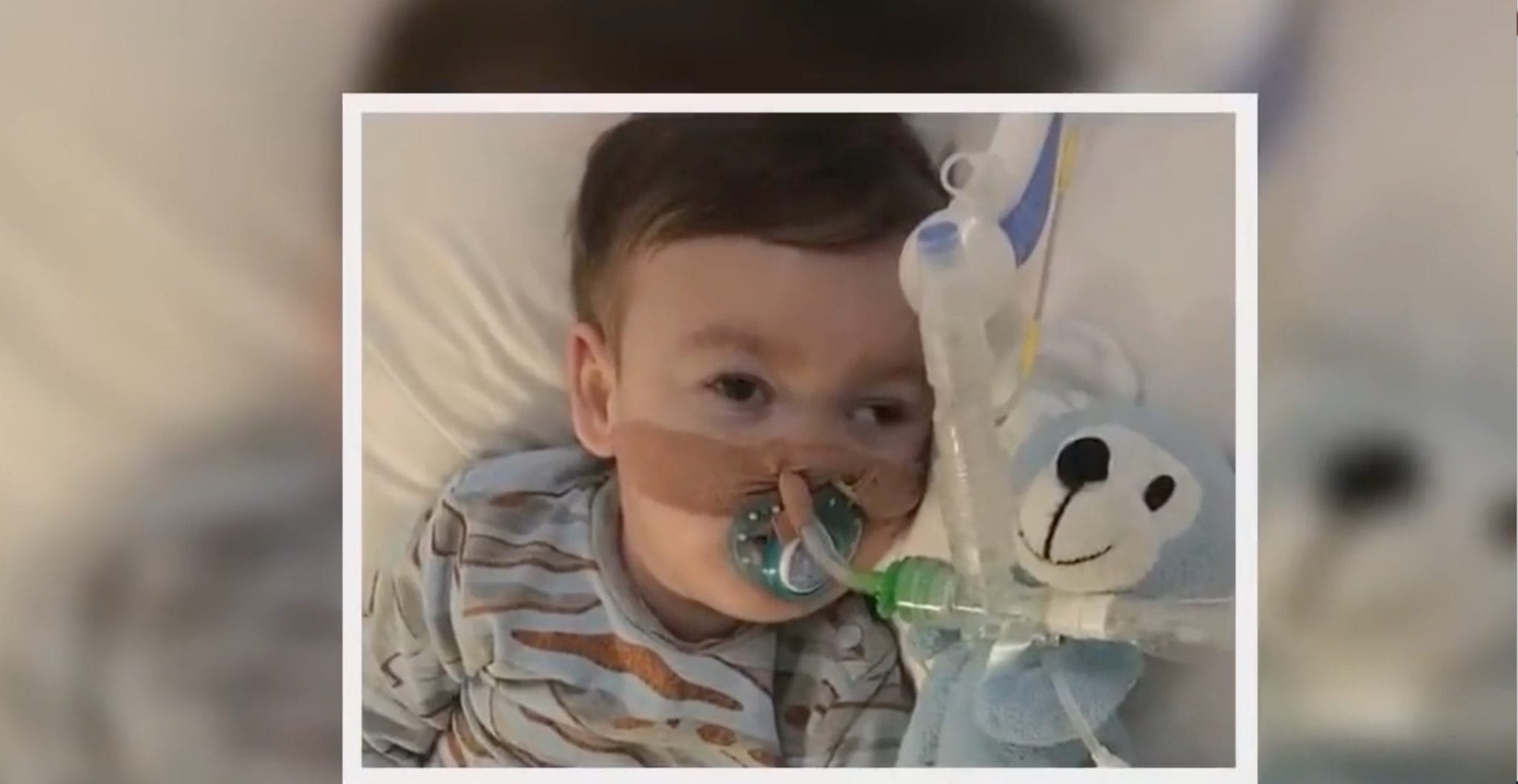 Yesterday afternoon, after meeting with his son’s National Health Service captors ostensibly to discuss “taking Alfie home,” Tom Evans shocked the boy’s international army of supporters by completely reversing the position he had held since last year concerning his son’s care: “In Alfie’s interests we will work with his treatment team on a plan that provides our boy with the dignity and comfort he needs.” You will note those words, “Alfie’s interests.” This is the euphemism that has been used by the NHS, the British courts, and supporters of socialized medicine everywhere to justify the state’s right kill Alfie Evans.

Neither of Alfie’s parents had ever used this term in this way in the past. Before Tom Evans went into that meeting, he vowed to continue fighting the malign medical and political system whose incompetence and tyranny he had exposed to the world. But after the discussion he had, like Orwell’s Winston Smith, learned to love Big Brother. Having raged since last year against the soulless machine that insisted on ending Alfie’s life without the minimal pretext of a plausible diagnosis for his illness, Evans suddenly offered robotic praise for the “professionalism” of its administrators, doctors, and clinical staff.

Why the reversal? The key is his announcement that he wouldn’t make additional public statements or give further interviews. Someone in that meeting allowed Tom Evans to glimpse the true power of the state, explained how he was causing it inconvenience, and made him understand that it would crush him if he didn’t relent. This is perfectly consistent with everything the NHS has done since the beginning of this tragic, yet instructive tale. From the moment the apparatchiks at Alder Hey Children’s Hospital advised him that it was no longer in “Alfie’s interests” to keep him alive, Evans’ ability to affect that decision was illusory.

Though his case was simple — set my son free to seek treatment elsewhere — and though he was granted hearing after hearing with “red judges” like Mr. Justice Hayden and legal luminaries like Sir Andrew McFarlane, the answer was always the same. Acquiescence in the pleas of Alfie’s parents wouldn’t have cost the NHS or the British taxpayer a farthing, yet Alfie’s doctors and the hospital didn’t even consider releasing him. Even when the Pope interceded and transportation was provided to move him to an Italian hospital that was ready to admit him, it somehow continued to be in “Alfie’s interest” to remain hostage to the NHS.

If you don’t understand why the NHS and British courts refused, you don’t get socialized medicine. It is not, nor has it ever been, about health care. It’s about power. Once a government — any government — takes control of your health care, they own you and your children. Alfie’s parents and the British public had for months demanded Alfie’s release just to seek treatment by doctors competent enough to figure out what was wrong with him. But, for a socialized system, that’s dangerous. It implies that an individual Brit has rights not bestowed by the state. This is not the case, as the BBC explains without a blush:

If a public body considers that a parent’s choices risk significant harm to their child, it can challenge these choices, but it must go to court in order to override the legal state of parental responsibility.… In the UK, the law doesn’t consider either doctors or parents to be automatically right. That’s why, when an agreement can’t be reached, it comes down to the courts to make the final decision based on the evidence available.

In a social “democracy” like Great Britain, the state isn’t there for the purpose of serving the people — sick or otherwise. The people are there for the purposes of the state. If the state can hold your child hostage in a hospital whose doctors are too incompetent to arrive at a diagnosis — yet may terminate his life without your permission — neither you nor your child are “free” in any meaningful sense of the word. And this doesn’t stop at health care, of course. Remember Brexit? What happened when the voters of Great Britain made their wishes known regarding the European Union? The will of the British electorate was ignored.

Likewise, the wishes of Alfie’s parents never meant anything. Nor did the overwhelming public support they received. It is the “interests” of the state that matter in Perfidious Albion, and they have little or nothing to do with those of the “free people” who populate that benighted isle. There is only one way that Alfie is ever going to escape the clutches of the state apparatus they call, with no intentional irony, the National Health Service. The NHS and Alder Hey Children’s Hospital was always going to have the final word on Alfie’s fate. Here’s the stomach-turning statement issued by the hospital after Mr. Justice Hayden’s latest ruling:

Alfie’s best interests are to continue with the end of life care plan developed by the clinical team who have cared for him throughout. Our top priority therefore remains in ensuring Alfie receives the care he deserves.… We would be grateful if respect and consideration is shown to all our staff, patients and families at the hospital at this difficult time.

It was Hayden, of course, who decided what was in “Alfie’s interests” as well as how much care he “deserved.” And note the touching concern Alder Hey’s administrators express for the tribulations endured by the staff of the hospital during their “difficult time.” They were, of course, further discommoded late Wednesday, when Alfie’s parents were granted another hearing before the UK Court of Appeal. This is the three-judge panel, headed by Sir Andrew McFarlane (note how many of the decision-makers are titled), that also colluded with the NHS to keep the pesky proletarian parents and their rowdy supporters under control.

And it worked. By yesterday afternoon, they had Tom Evans dutifully tugging his forelock, and he was given multiple pats on the head by the British Ministry of Truth as well as the government organs on our side of the pond, all of which commended him for “working with the doctors.” British Member of European Parliament Steven Woolfe will introduce “Alfie’s Law,” which will certainly help his career. And where is Alfie himself? He is exactly where he was when all this started, in the iron grip of the NHS, a third-world socialized medical system from which no force can get him released — except of course for the grim reaper.