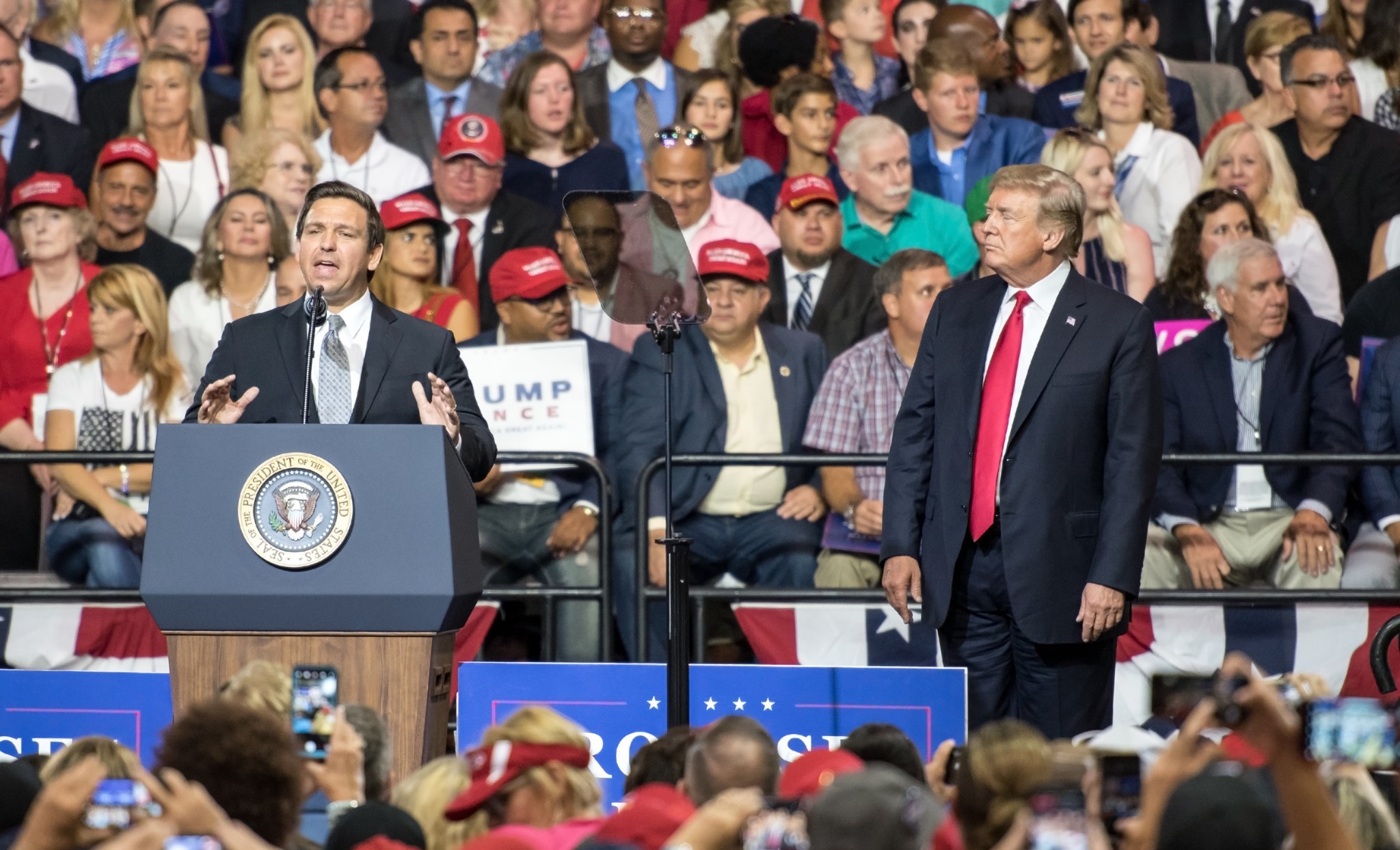 First, a caveat: this Trump versus DeSantis debate that pops up here and there really isn’t as big a thing as the legacy media and some of the old-school political trolls want to make it, because there is no rivalry of any real note between Donald Trump and Ron DeSantis.

The two are on the same side in the massive political fight for the future of the country that is just beginning. But attempts to stoke division between Team Trump and Team DeSantis have found occasional purchase because the more hard-line Team Trump folks seem to have the willies over the idea that the Republican establishment is going to throw The Donald overboard for DeSantis, whom, the story goes, they can control. And a lot of the Never-Trump gang, realizing that the dreams of a Mike Pence or Nikki Haley taking us back to the bygone days of the Bush GOP really won’t be fulfilled, are projecting those dreams onto DeSantis as a more palatable alternative to The Orange Man.

These are both very short-sighted perspectives, not to mention they’re wrong.

DeSantis is Trump 2.o. He’s not the Never-Trump dream candidate, any more than Ted Cruz was the Never-Trump dream candidate in 2016. DeSantis is the most based and ballsy Republican politician currently holding office in America today. The things he does in Florida are every bit the radical departures Trump offered during his first term in the White House, things which are “divisive” and “controversial” as Trump’s actions like placing our embassy in Israel in Jerusalem were.

Which is to say, the Left finds them controversial until they happen, and then a few days later there is no controversy at all.

For example, there was a huge hue and cry among the National Review set when DeSantis and the Florida Legislature stripped Disney of its $200 million per annum in corporate welfare from the Sunshine State. But you haven’t heard a peep since.

And a couple of weeks ago when DeSantis, presiding over the Florida GOP’s annual Sunshine Summit event, declined to credential hostile legacy corporate media operatives for covering it and instead welcomed in conservative media, that got him nasty, terrified notices from the likes of Jonathan Chait. And what we found out was that nobody cares what Jonathan Chait thinks.

And then Thursday, DeSantis used his constitutional power to fire, or at least suspend (and that suspension is all but certain to be permanent) the state attorney in Hillsborough County (which is the Tampa area). Andrew Warren is his name, and he’s one of the Soros-backed Usual Suspects. Warren is a hug-a-thug social justice warrior who’s busily letting criminals out of jail or prosecution at a frenetic pace, with the attendant spike in violent crime. He refused to prosecute George Floyd rioters in Tampa, to the outrage of Republicans and most independents, and when the legislature and governor responded to that by passing a tough anti-riot law last year Warren screamed and bitched about it and swore he wouldn’t prosecute anybody under the bill.

And then he publicly refused to prosecute anyone under Florida’s post-Roe abortion laws or a new law banning the performance of sex-change operations on minors. (READ MORE: DeSantis Declares Doctors Transitioning Minors Should Be Sued)

So enough was enough, and DeSantis sacked Warren. The Left is screeching about it; Nikki Fried, the abject imbecile Florida Agriculture Commissioner (who wants to bet she can’t even grow tomatoes in her back yard?) who’s the likely Democrat nominee to face DeSantis this fall, lost her mind in a statement after Warren got shown the door:

This is a politically motivated attack on a universally respected State Attorney democratically elected to exercise prosecutorial discretion. Ron DeSantis is a pathetic bully. He’s doing this because he wants to be dictator, not a governor of Florida. That’s not how this works, though. This will backfire. We just saw it in Kansas. Florida is a pro-choice, pro-democracy state. If this stands, the people of Florida will put an end to it in November.

Take it easy, Darling Nikki. In a week nobody will remember Andrew Warren, and they’ll forget about him until he either (1) forgets about politics and starts putting up personal-injury billboards on the highway or puts his number on bus benches for criminal defendants to call, or (2) runs for something else and gets beat.

We saw these things from Trump as well, though nationally the Left has less ability to let them go. With Trump there was always a Hawaiian judge someplace who’d slap a national injunction on the implementation of entirely legal presidential policy choices, and that allowed some controversies to linger beyond their sell-by date. But when he was able to implement things, they tended to melt away. By the end of Trump’s presidency, for example, the border had largely been reduced to a simmer as a national hot-button issue, because Trump’s policies worked. And that was despite Nancy Pelosi and Chuck Schumer killing the completion of Trump’s border wall.

Which is to say DeSantis, were he inaugurated president in January 2025, would likely face the same kinds of frustrations as Trump from the D.C. Swamp and its affiliated media operatives.

The issue isn’t whether Trump or DeSantis is the GOP nominee in 2024. Both would be fine. Seriously. Trump is starting to get to the outer edge of what you’d look for age-wise in a president, but he’s also been through the wars and he’d be able to leverage that experience to hit the ground running and efficiently do the things that are controversial until they aren’t early in his second term.

And DeSantis is younger and smoother than Trump, having had a good deal more experience with politics and government.

But — and I’m going to harp on this, because it’s a point I make in my book The Revivalist Manifesto, which you should buy and read thoroughly — political eras are formed in America not on the basis of one election but rather five or six in a row. The Democrats kicked off the first era of our political history with Thomas Jefferson’s rout of John Adams in 1800, and they didn’t lose a presidential race until 1824, by which time Democratic politics was American politics. Ditto for the second era, which began with Abraham Lincoln’s 1860 victory; the GOP didn’t lose a presidential election until 1884. And the third era, which is coming to a miserable end, began with Franklin Delano Roosevelt’s rout of Herbert Hoover in 1932; it was 1952 before a Republican again won a presidential race, and Dwight Eisenhower was necessarily so timid when it came to domestic policy that by the end of his tenure the John Birch Society was convinced he was a communist mole.

The point being, it takes a generation for the concrete of a new political era to cure. And that means it’s less important whether Trump or DeSantis wins in 2024 than that one of them does. And furthermore, what’s more important than that is the standard both of them set for Republican politicians up and down the governmental food chain.

Be bold. Do the things which need to be done. Don’t abuse your power, but use it. And don’t treat your voters like rubes and suckers who can be left by the roadside after you’ve used them to get elected.

That’s what things like appointing the good conservative judges over the unhinged objections of Democrats or sticking it hard to Disney for trying to impose Hollywood values on Florida, mean. And we need a Republican Party that accepts that standard as its own and governs accordingly.

Get that, and don’t let it backslide into the weak mediocrity of an Asa Hutchinson who’s too timid to sign a bill banning men from women’s sports in Arkansas, for example (or, ditto, Davos attendee Eric Holcomb of Indiana), and you’ll have that fourth political era to replace the broken-down failure of the current one.