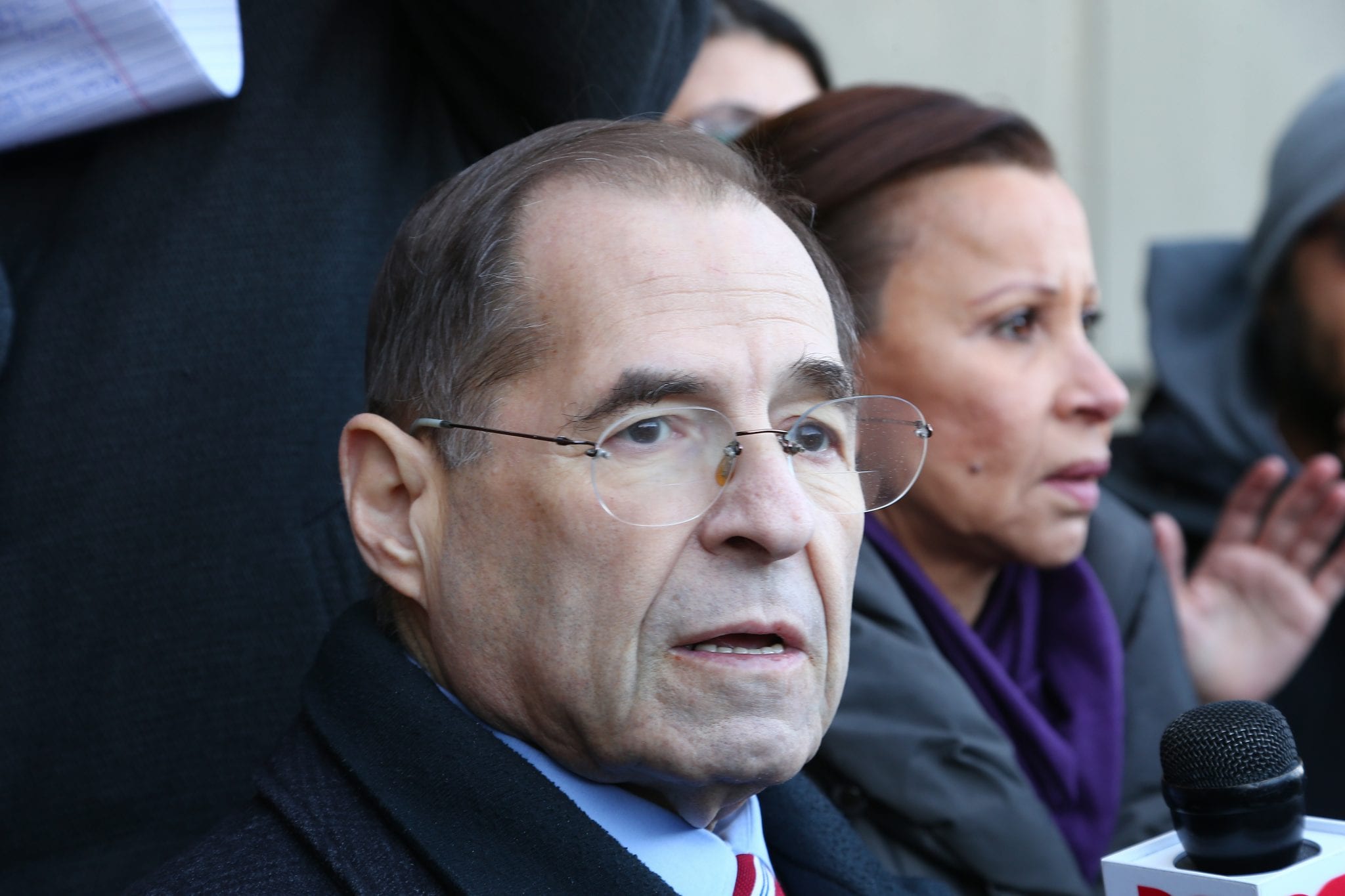 President Donald Trump is absolutely correct. He said it in his previous State of the Union address, and he reiterated it on Wednesday. It is absolutely impossible for a serious doer, someone who gets things done excellently and on time, to work productively with people aiming to destroy him.

He can work with the Chinese, if they choose to cooperate, because they are not engaged in a personal vendetta. Rather, the Chinese want to dominate. That is workable, especially with an American President who understands their goal and is determined not to let them get that. With such preliminaries set aside — you want to dominate, and I won’t let you — productive deals can be made. Same with America dealing with Mexicans, Canadians, Japanese, Europeans. There is nothing unusual about dealing productively with competitors animated by sharply conflicting goals.

But you cannot work constructively with people aiming to destroy you personally. That does not work; it never works. Anyone who ever has been in any business or profession knows the difference between the challenges of trying to get something done with others who have differing, even competing, goals versus the utter impossibility of accomplishing anything serious and meaningful with people bent on personal vendettas of destruction.

When Trump tries to engineer a revamped trade deal with Mexico and Canada, he knows that each side will negotiate to achieve its respective goals. Once the deal is signed by all parties, the inference is that everyone sees a path to achieving many or at least some of those respective goals. Going forward, each side has motivation to cooperate productively. Certainly there will be disappointments on some or all sides that certain hoped-for goals will not be achieved, but they will proceed to obtain at least the meaningful benefits for which they successfully have bargained.

By contrast, when dealing with Democrats driven by an insane desire to impeach Trump or “at least” to destroy him personally — to ferret through his personal taxes, to go after his family and associates, to concoct one hoax after another aimed at bringing down his very reputation and raising preposterous specters regarding treasonous collusion with enemies or engaging in “cover-ups” — there is no point in his proceeding with them. No matter what is agreed, they ultimately will sabotage him and the agreement. For example, if an infrastructure agreement is reached, and subsequent polls reflect that voters are pleased with the results and credit the President for moving that infrastructure agenda forward, then Democrats will turn around mid-way and sabotage the agreements. Any person who ever has been in a real world situation like this in the private sphere has seen this done.

All projects, no matter how wonderful and popular, can be subverted. All agreements can be sabotaged. Look at the California high-speed-rail boondoggle. In that case, even without trying to sabotage that classic example of a dynamic infrastructure project, they managed to turn an “iffy” project into a complete disaster. In 2008, it was projected to cost $40 billion, itself a ridiculously exorbitant expense. By 2012, it was up to $68.4 billion. Now it is projected to cost $98.1 billion. In 2008, the public was told that, upon completion, a one-way train fare from Los Angeles to San Francisco would cost $55. By comparison, a flight between those two destinations is $80 and does not require a $100 billion boondoggle that also will continue running at a massive annual loss forever, if it ever is built.

President Trump is not facing “Congressional Oversight.” Rather, he is enduring Congressional Torture. He was investigated for two years by a high-powered, unrestrained team of prosecutor sharks thirsting for blood, with an unlimited budget to feed their every whim, and they came up with nothing. In a reasonable world, that would be the end of the collusion fantasy. You hit him with your best shot — like the mental case who recently kicked Arnold Schwarzenegger in the back — and you accomplished nothing. That investigation was a colossal waste — of time, of money, of national civility — and there is no further oversight needed on that front. So this is not about “Congressional Oversight.”

From Day One, Maxine Waters has been chanting “Impeach 45!” Now that she incomprehensibly sits as the chair of the House Banking Committee, with a gang of confederates alongside her including Rashida Tlaib, Ocasio-Cortez, and Al Impeachment Green, she gets to move forward on trying to drive Trump out of office. So it is with every other House committee. They are not doing “oversight,” and they are not accomplishing anything. Rather, they are on a vendetta against a guy who did not wrong any of them. He certainly cannot work with such people.

Jerrold Nadler is so beam-focused on taking down Trump that he is demanding that the Attorney General of the United States, William Barr, violate the law and disclose legally confidential grand jury testimony. Of course Barr cannot do that. Nadler is busy issuing subpoenas, left and left, demanding that all kinds of Trump confidantes present themselves for perjury traps. Of course Trump cannot work with such people. Meanwhile, Nadler has become so obsessed with his War Against Trump that he has constituents back home in his district complaining that he and his office staff are ignoring their needs.

This is unprecedented in American history. Once a Congressional House is bestowed the right and power to subpoena years and years of taxes of political opponents, this country may as well turn out the lights. That is all that Washington will do. Republicans subpoenaing Obamas’ taxes, Clintons’ taxes, Eric Holder’s taxes, Loretta Lynch’s taxes, Strzok, Page, McCabe, Comey. Democrats doing the reverse — namely, what they are doing now. Everyone subpoenaing the taxes of federal judges. And ultimately the taxes we most want to see: the Years 2018 through 2020 tax filings of Michael Avenatti and Christine Blasey Ford.

In 2018 enough American voters in “swing districts” swung the Congressional pendulum to create a divided government. At the time we had a Congress that was quite imperfect under Paul Ryan, but that nevertheless passed a first round of bold tax cuts and financial incentives that regenerated the American economy into high gear and revived the labor markets, while that Congress also rebuilt and empowered the military with huge new allocations after the Wasted Obama Decade. Plans were in motion for addressing the border emergency, and the funding was in place for passing the next Congress when the House’s appropriation would get through the filibuster-paralyzed Senate during the once-a-term “budget reconciliation” process. Agency deregulation was in full throttle, and the Republicans were turning to healthcare.

With an economy blazing, yet with inflation modest, the “wisdom of the American People” proved itself once again in 2018 to be a Henny Youngman joke: an old, old, quick one-liner. Instead of allowing the Trump Administration to carry its program to conclusion, the voters spiked the tires and jammed the cylinders. They gave the Democrats a majority in one chamber, electing a maniacal House that has no agenda but to destroy Trump.

It is the most amazing thing to watch. Iran is enriching uranium. North Korea is rumbling. China is strong-arming us economically, waiting to see who blinks first. Yet in Washington all House Democrat majority eyes are fixated on getting Trump’s taxes. The 2020 Presidential campaign already has begun. Debates are around the corner. Primaries soon thereafter. All focus is moving to 2020, with the Democrat House having accomplished nothing and on a collision course to produce nothing but more subpoenas.

If this is what American “swing voters” want, then they may revel in their “wisdom.” They had a situation that was almost too good to be true. Obama mockingly had sneered that it would take a “magic wand” to achieve such results. Yet the maniacal Democrat House has stopped all progress. In an environment of Congressional abuse, the frenzied Democrats are like a rabid dog unable to focus on anything other than chasing its tail. Healthcare coverage is not being improved. Infrastructure will not be addressed. Forget about fixing the border emergency.

Meanwhile, the Chinese, North Koreans, Iranians, Russians, even the Europeans and others, cannot be blamed for thumbing their noses at the United States as they watch an American government in paralysis while utter fools issue subpoenas and demand a man’s back taxes that have absolutely no bearing on his job performance as President since January 2017. The world’s most evil dictatorships — the ones that threaten us globally, militarily, economically — have absolutely no reason to be responsive to a Trump Administration that they see handcuffed within, in peril of being ousted in eighteen months. These dictators know that they themselves will remain in power, will face no such nonsense from within, and can wait out the worst flaws in American democracy as they almost always do. This is the mess created by the “wisdom of the American people.”

Hopefully, “swing voters” will wise up by 2020. Or at least just get disgusted enough to return the House to more sensible moorings.

Dov Fischer
Follow Their Stories:
View More
Rabbi Dov Fischer, Esq., a high-stakes litigation attorney of more than twenty-five years and an adjunct professor of law of more than fifteen years, is rabbi of Young Israel of Orange County, California. His legal career has included serving as Chief Articles Editor of UCLA Law Review, clerking for the Hon. Danny J. Boggs in the United States Court of Appeals for the Sixth Circuit, and then litigating at three of America’s most prominent law firms: JonesDay, Akin Gump, and Baker & Hostetler. In his rabbinical career, Rabbi Fischer has served several terms on the Executive Committee of the Rabbinical Council of America, is Senior Rabbinic Fellow at the Coalition for Jewish Values, has been Vice President of Zionist Organization of America, and has served on regional boards of the American Jewish Committee, B’nai Brith Hillel, and several others. His writings on contemporary political issues have appeared over the years in the Wall Street Journal, the Los Angeles Times, the Jerusalem Post, National Review, American Greatness, The Weekly Standard, and in Jewish media in American and in Israel. A winner of an American Jurisprudence Award in Professional Legal Ethics, Rabbi Fischer also is the author of two books, including General Sharon’s War Against Time Magazine, which covered the Israeli General’s 1980s landmark libel suit.
Most Popular
1
Special Report
Evidence Mounts — Chauvin Did Not Murder Floyd
by Jack Cashill