In Search of Wisdom Alan Dershowitz,Benjamin Franklin,Bible,Ronald Reagan The Uncanny Wisdom in Giving Thanks - The American Spectator | USA News and Politics
Menu
In Search of Wisdom
The Uncanny Wisdom in Giving Thanks
It goes far beyond winning friends for life.
by Shmuel Klatzkin
Benjamin Franklin and his wife (Deborah) in their house (in Philadelphia) (H. Scheibler, 1920/Wikimedia Commons) 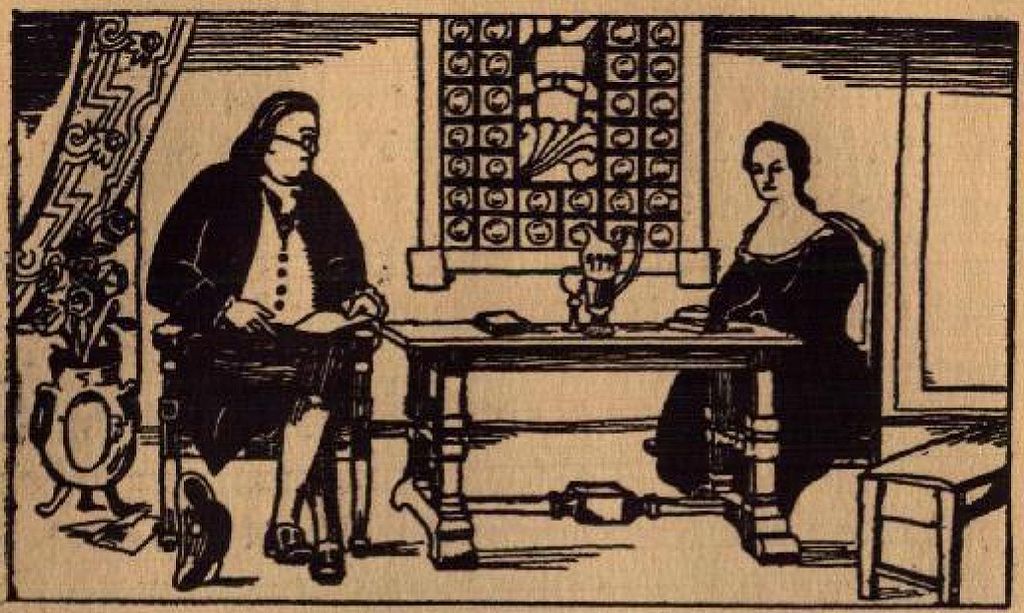 More Politics
Sign up to receive our latest updates!
Register
Hot Off
The Press
Sunday Report
The US Bishops Promote a Protégé to the Rapist Theodore McCarrick
by George Neumayr
Cultural Decline
On Seed Oils and the ‘New Gnosticism’
by Matthew Omolesky
Special Report
Arizona’s Election Bungle
by Tom Raabe
Ben Stein's Diary
What It Means to Be 78
by Ben Stein
Technically Right
The Administrative State Can Put a Bug in Your Phone
by Debra J. Saunders

It is remarkably sane to make a holiday of giving thanks.

The other national holidays are fine enough — honoring our founding leaders, commemorating our inception as a nation, honoring those who took up arms to protect our nation and its cause. But a day simply dedicated to giving thanks has a weight to it and grace that stand out.

Groveling before the cancel culture earns no respect, yet mere reactive opposition wins few new minds and hearts to the cause.

In Hebrew, the word ‘thank’ has a root connection to the word for ‘admit’ or ‘confess.’ To thank. Is to admit that things one enjoys are there by virtue of someone else. I was hungry and someone invited me to dine; I was poor and someone staked me to the capital to set up in business; I was unrecognized and someone saw me and gave me a break — thanks are appropriate in these situations and in their like.

Narcissistic despots, whether on the small or the grand scale, are not disposed to thanking. Ezekiel has Pharaoh saying. “The Nile is mine and I have made myself.” There is the pretense of being self-enclosed and utterly self-sufficient. But these pretensions have isolation as their direct consequence. When we admit no need of others, we admit no one in.

Who wants to live life in solitary confinement?

Wisdom points us in a different direction. Ben Franklin, that eminently practical thinker, related a method to release us from the solitary and enable us to make friends even of some who dislike us.

Science journalist David McRaney wrote of what he called “The Benjamin Franklin Effect.” Early in his life, Franklin was standing for election to a local post. During the campaign, someone took a stance in opposition to Franklin and publicly disparaged his character as being unworthy of the public trust.

Franklin was angry at the slander, but his practical wisdom focused on his opponent’s good education, prominence in affairs, and verbal sharpness. He therefore decided that it would be unwise to give in to emotion and give back nastiness in kind. Instead of reacting and cementing the man in as his enemy, why not see if he could recruit him as a friend.

McRaney wrote what Franklin did:

Franklin set out to turn his hater into a fan, but he wanted to do it without “paying any servile respect to him.” Franklin’s reputation as a book collector and library founder gave him a standing as a man of discerning literary tastes, so Franklin sent a letter to the hater asking if he could borrow a specific selection from his library, one that was a “very scarce and curious book.” The rival, flattered, sent it right away. Franklin sent it back a week later with a thank-you note. Mission accomplished.

The next time the legislature met, the man approached Franklin and spoke to him in person for the first time. Franklin said the man “ever after manifested a readiness to serve me on all occasions, so that we became great friends, and our friendship continued to his death.”

Franklin realized the power of asking for help, of putting oneself in a place where giving thanks would be necessary. He distinguished that from servility, which would only breed contempt, and from pugnacity, which would solidify the relationship into one of unfriendly and reactive opposition.

The Rabbis of old note that Scripture will make mention of God’s humility right next to mention of His might. They point, among others, to a Deuteronomy text, For the Lord your God is God of gods and Lord of lords, which tells of God’s preeminent power. Immediate after, the text says, He executes the judgement of the father less and widow.

The lesson the Rabbis derive from this is that true power and self-limitation are intimately entwined. This is seen ultimately in the act of Creation itself, which on the one hand is the ultimate expression of power, yet on the other, is an acute act of self-limitation. For were God to express His limitless power, the creation would be overwhelmed and destroyed, even as we must step down the current from the great electric transmission lines until the voltage is low enough to power our toaster without it exploding in a shower of sparks and flame.

Is there anything more necessary for our country than understanding once again the power of admission and the need to thank? To understand as the Psalmist put it, in one way of reading the text, that He has made us and not we ourselves?

The point of such admissions, to follow Franklin, is not servility, but to make oneself serviceable to others and thus friendly. This applies in every relation, from the most mundane to the divine — asking for the other’s help can be endearing and establish the enduring foundation for friendly partnerships of all kinds.

There is a balance to attain here that takes some practice. It is easy to slip off in either direction, into either hostility or toadying. This is especially true in the great political issues that face us. Groveling before the cancel culture earns no respect, as so many found out who thought that apologizing for all the fantastic items on the woke bill of indictment would restore them to grace. Yet on the other hand, mere reactive opposition wins few new minds and hearts to the cause.

There must be the appeal to friendship, for the possibility of change which is where hope lies.

A few decades ago, Alan Dershowitz, then a proud liberal Democrat, wrote a letter of reproof to a great Jewish leader. Dershowitz was upset that a prominent follower of this leader had given public recognition to Senator Jesse Helms, who had made several statements that were hostile to Jews and Israel. You are allowing yourself to be co-opted by someone who is an enemy, he admonished.

The rabbi’s reply was: You are looking at who Helms has been. I am looking at who he can be. So it was: when in a few years, the Republicans were again in the majority in the Senate, Helms became chairman of the Foreign Affairs Committee and made himself known as a staunch supporter of America’s alliance with Israel.

Thanksgiving calls upon us to recognize the age-old wisdom in giving thanks and admitting our needs. It is the surest way to let others see how much they are needed. And there is no more powerful incentive in life than the meaning that comes from realizing that we really are needed.

Let us give thanks, and make it a habit. Using Ben Franklin’s method of actively creating a relation in which we will necessarily give thanks, let us be effective in the politics that really matters, and move our country back from the precipice of endless reactive opposition and recrimination.

It seems that there was a great conservative leader who stressed Sunshine in America even as he staked out clear positions in clear terms. We could do worse than learn from the Bible, Ben Franklin, and Ronald Reagan as we work towards rebuilding true American greatness.