by George Parry
The home of the FISC in Washington, D.C. (Wikimedia Commons) 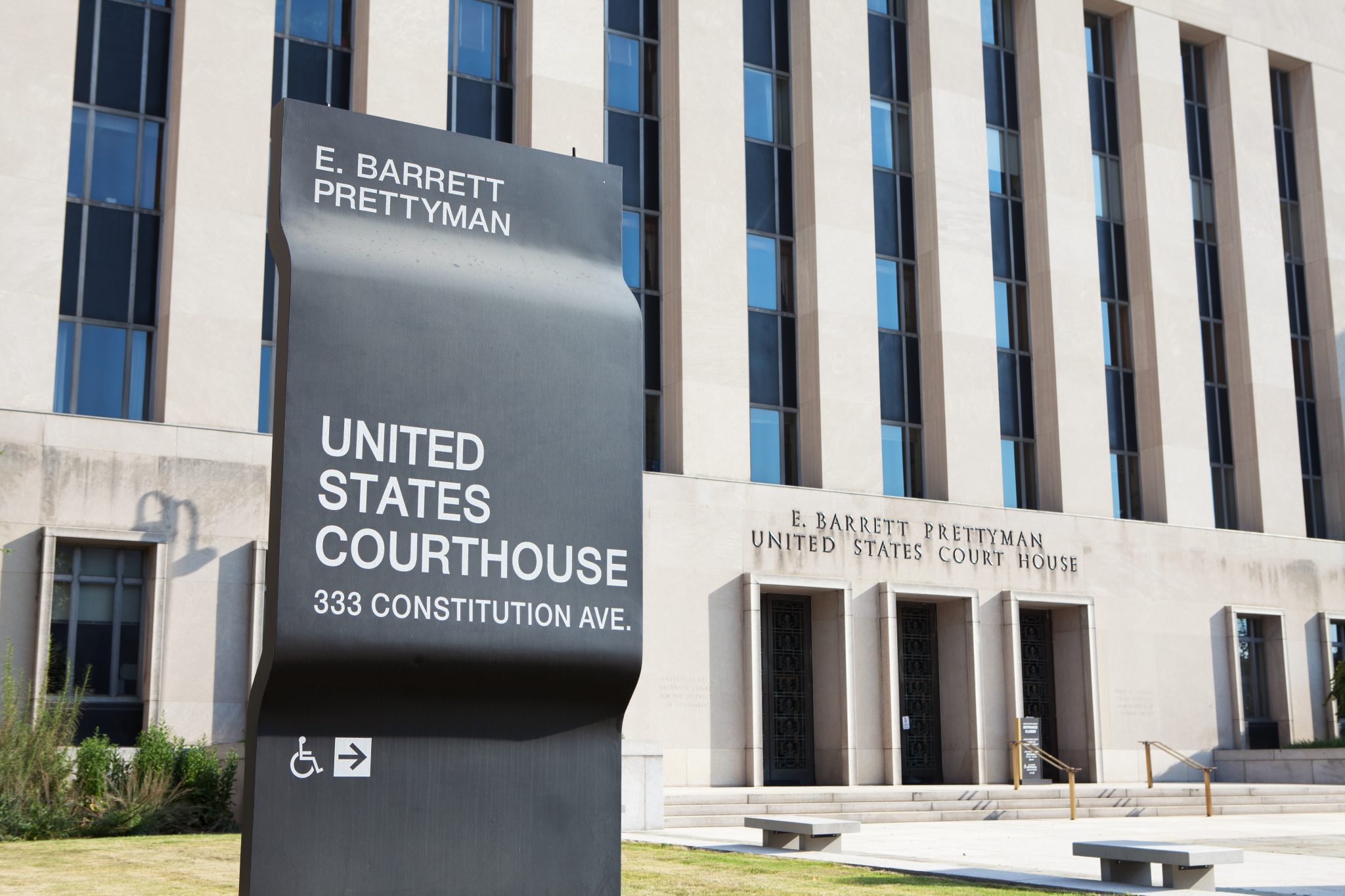 Webster’s dictionary defines “Potemkin village” as “an impressive façade or show designed to hide an undesirable fact or condition.” So it is that the adjective “Potemkin” is used to characterize any artifice contrived to deceive others into thinking that things are better than they really are.

As set forth below, I pose the question as to whether or not, based on its operations and recent events, the Foreign Intelligence Surveillance Court (“FISC”) can fairly be described as a Potemkin institution which in reality serves only to give the false impression that it is protecting U.S. citizens by imposing constitutional limits on the government’s enormous, comprehensive, and thoroughly invasive powers of electronic surveillance.

On December 9, 2019, the Justice Department’s Office of Inspector General released its Review of Four FISA Applications and Other Aspects of the FBI’s Crossfire Hurricane Investigation. That report detailed 17 “inexplicable errors” in the FBI’s four FISA applications to spy on Trump campaign adviser Carter Page.

Among these so-called “errors,” the OIG found that, although a number of persons at the FBI were aware that Page had a reporting relationship with the CIA, the FBI did not disclose that relationship to either the Justice Department’s National Security Division or the FISC. Even worse, it also determined that an attorney in the FBI’s Office of General Counsel (OGC) had deliberately altered an email from the CIA confirming its relationship with Page to state that he was not a source. That attorney resigned from the FBI and has been referred for criminal prosecution.

None of the FBI’s four FISA applications reflected the central fact that, far from being an agent of a foreign power, Page had been working for the CIA.

Consequently, on December 17, 2019, Rosemary Collyer, Presiding Judge of the Foreign Intelligence Surveillance Court, issued an order responding “to reports that personnel of the Federal Bureau of Investigation (FBI) provided false information to the National Security Division (NSD) of the Department of Justice, and withheld material information from the NSD which was detrimental to the FBI’s case, in connection with four applications to the Foreign Intelligence Surveillance Court (FISC) for authority to conduct electronic surveillance of a U.S. citizen named Carter W. Page. When FBI personnel mislead NSD in the ways described above, they equally mislead the FISC.”

Noting the “seriousness” of the “misconduct,” Judge Collyer observed that “ ‘Congress intended the pre-surveillance judicial warrant procedure’ under FISA, ‘and particularly the judge’s probable cause findings, to provide an external check on executive branch decisions to conduct surveillance’ in order ‘to protect the fourth amendment rights [against unreasonable searches and seizures] of U.S. persons.’ The FISC’s assessment of probable cause can serve those purposes effectively only if the applicant agency fully and accurately provides information in its possession that is material to whether probable cause exists. Accordingly, ‘the government … has a heightened duty of candor to the [FISC] in ex parte proceedings,’ that is, ones in which the government does not face an adverse party … The FISC ‘expects the government to comply with its heightened duty of candor in ex parte proceedings at all times. Candor is fundamental to this Court’s effective operation.’ ” [Emphasis added]

Based on all of this, Judge Collyer ordered the government to advise the FISC in a “sworn written submission of what it has done, and plans to do, to ensure that the statement of facts in each FBI application accurately and completely reflects information possessed by the FBI that is material to any issue presented by [a FISA] application.”

So, there it was. The day of reckoning was at hand. The FISC had been manipulated and deceived, and it wanted answers.

Or so it seemed.

Shortly after entering her order, Judge Collyer, citing health reasons, resigned as the FISC’s presiding judge. She was replaced by Judge James Boasberg, who, on January 10, 2020, appointed David Kris, former assistant attorney general of the Obama Justice Department’s NSD, as an amicus curiae to assist the FISC in assessing the government’s response to Judge Collyer’s order. He is to review and advise the FISC regarding the government’s proposed changes to its FISA warrant application procedures.

But is Kris the right man for the job? He recently claimed that the OIG’s damning report somehow actually vindicated the FBI. Moreover, in 2018, he attacked the House Intelligence Committee’s Rep. Devin Nunes (R-Calif.) for alerting the public to the abuses that were later substantiated by the OIG report.

Kris publicly characterized the eponymous Nunes memo as “dishonest” and asserted that “if it is allowed to stand, we risk significant collateral damage to essential elements of our democracy.” And against all evidence to the contrary, he further stated that Nunes’ assertion that the FBI misled the FISC about the credibility of Christopher Steele was “not true.”

Appearing on MSNBC’s Rachel Maddow Show in 2018, Kris claimed that the Page FISA “applications already substantially undermine the president’s narrative and that of his proxies, and it seems to me very likely that if we get below the tip of the iceberg and into the submerged parts and more is revealed, it’s going to get worse [for the president], not better.”

Similarly, Kris also tweeted that the “walls” were “closing in” on Trump.

Regarding Kris, Nunes has opined, “It’s hard to imagine a worse person the FISC could have chosen outside Comey, McCabe or Schiff.”

So what are we to make of this appointment? What does it mean?

It seems to me that Kris’ appointment provides a moment of clarity for which all of us should be grateful. It has publicly and unambiguously confirmed what many of us have long believed: that the FISC is and for decades has been a façade, a pretend court posing as an independent judicial check on the government’s exercise of its enormous powers of electronic surveillance.

However well-intentioned by those who enacted FISA, the FISC over time has evolved into a meaningless rubber-stamp appendage to the surveillance state. For example, as reported by the Justice Department, in 2018, out of the 1,117 FISA applications submitted by the government, the FISC approved 1,079. The lopsided ratios of approvals to denials are similar for every year of the FISC’s operations.

Whatever its pretensions and judicial trappings, the FISC has been absorbed and co-opted by the surveillance state such that it now serves merely to put a reassuring smiley face on the alarming fact that the government has the untrammeled and unlimited power to inspect, catalog, and lay bare every nook and cranny of our lives. We were led to believe that such invasions of privacy would be limited, legal, and proper because they would be subject to oversight and regulation by an independent judiciary. But, as with so much else purveyed by the government, that has proven to be nothing more than a soothing lie.

Although Judge Collyer castigated the FBI for its blatant deception of the FISC, she of necessity had to concede that the FISC is totally dependent on government affiants honoring their oaths to tell the truth, the whole truth, and nothing but the truth. The FISC possesses no power to independently investigate or test the information sworn to in FISA applications. And, since FISA warrants are not subject to judicial review in adversarial suppression hearings or similar proceedings in which defense counsel can probe and test the veracity and accuracy of the applications, the government can figuratively get away with murder. By design, the whole FISA process is based on the presumption that the government will never lie to the court.

This is government by fairy tale.

The FISC wants further refinements of government procedures to make sure that the “inexplicable errors” found by the OIG will not be repeated. But these so-called “errors” were not the regrettable result of a deficient process. They were the direct and fully intended result of concerted corrupt action by the leadership of James Comey’s FBI.

The real issue is that Comey and his leadership cadre decided to play presidential politics by dishonestly manipulating the FISC to spy on Donald Trump’s presidential campaign, transition team, and administration. This was a failure of character at the leadership level that can’t and won’t be fixed by rearranging FBI and DOJ’s guidelines.

Over the last three years, as the FBI’s corruption was laid bare step by painful step, the conservative punditry espoused the belief that an aroused FISC would take action against those who had manipulated it. Now, in light of Kris’ appointment, it is apparent that the FISC will do no such thing. To the contrary, the astonishing designation of this defender of Comey’s corrupt FBI has made clear that the FISC is not an outraged victim of deception, but, rather, is part of the problem and content to avert its gaze from the ample proof of the government’s dishonesty and malign motives that are at the very heart of the Carter Page spy scandal.

So, with a rap of his gavel, Judge Potemkin calls the court to order. Fear not, everybody! The FBI may have illegally spied on Donald Trump’s campaign and administration. But it was all a big mistake, and, with a few changes to the FISA warrant procedures, all will be well. The FISC has everything under control. There’s nothing to see here. Now move along.