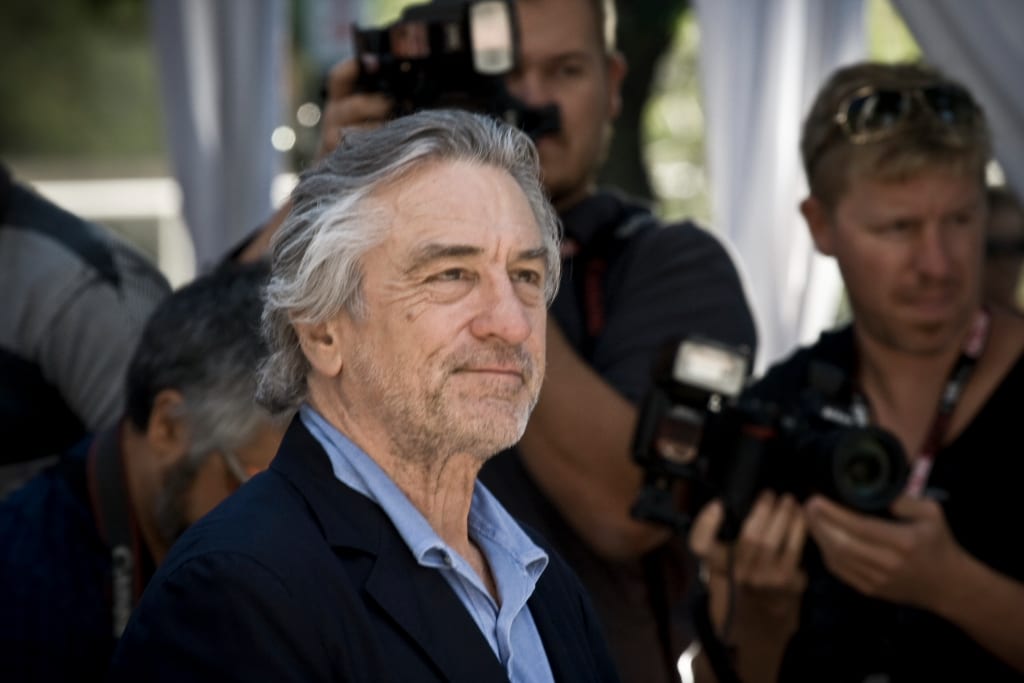 These are strange times. One of the behaviors that makes things strange is the growing popularity of foot shooting. Foot shooting, of course, involves shooting yourself in the foot. It’s another way of describing self-destructive behavior. Unfortunately for the rest of us, the damage done is not confined to the shooter.

Foot shooting is quite popular among entertainers, especially actors and comedians. Drama is a deliberate creation of fantasy, of an imaginary world. In order to enjoy a movie or play it is necessary to “suspend disbelief.” For the moment you have to forget that what you’re watching isn’t real and that the actors are acting and “playing” a part. The actors aren’t who they’re pretending to be. Knowing too much about them makes it much harder to suspend disbelief.

Robert De Niro is a great actor who has played many great roles. His profane and overwrought public utterances over the past several months will make it hard for many of his fans to ever watch him again without remembering who he is as a real-life person. In effect, he has blown his cover and that cover is necessary for making what he does work.

Presumably De Niro and other actor-activists got into acting to entertain people. That’s why they earn the big bucks. Now, rather than entertaining, they’re making many of their fans angry and disgusted. As everyone else does in this country, actors have freedom of speech. However, because of the nature of their craft there are good reasons for them to preserve their anonymity. Until recently, I was unaware of the extent of De Niro’s ignorance. I had nothing to base an opinion on.

De Niro, Sean Penn, and Morgan Freeman are extremely good at their crafts. More often than not, however, their acting skills in no way carry over to politics, economics, or science. In regard to acting skill, De Niro scores a ten. In regard to political or cultural acumen, he is a zero.

Comedians have also fallen prey to foot shooting. The purpose of a comedian is to make people laugh. That ceases when humor becomes politicized.

Politicized comedians have not only shot themselves in the foot, they have lost track of their reason for being comedians. Politics kills humor and there’s nothing funny about hate. Johnny Carson, Jonathan Winters, Sid Caesar knew that instinctively.

Actors and comedians need to make a decision — do they want to entertain people or proselytize? For them, it is essentially impossible to serve two masters. One of the masters is incompatible with the other.

I used to be an NFL fan, especially of the San Francisco 49ers in the Joe Montana, Steve Young, Jerry Rice era. So far as I know none of them ever publicly expressed their political opinions.

I have not watched five minutes of a 49er’s game in over a year. The only NFL game I’ve watched in the past year was the Super Bowl. I’ve heard numerous people say essentially the same thing. They say they’re done with the NFL.

Former fans are angry at the players for disrespecting their country, but the greater anger is directed toward the teams’ owners and the NFL hierarchy.

The NFL has unfortunately revealed who and what they are. Although they’re good people in most ways, in this instance they’ve behaved like spineless, clueless cowards. They should have nipped the protests in the bud before they became overblown and out of control.

The owners have demonstrated a disrespect for their fans as well as their country and demonstrated that they are afraid of their own employees. Their brains have been addled by political correctness and virtue signaling. Their self-preservation instincts have gone dormant.

The owners have insulted a large portion of their fan base. It’s hard to forget and forgive being insulted and disrespected. For many of us, the NFL owners and management have managed to take the fun out of watching a football game. Thanks a lot. Pro football was an innocent distraction from the stresses and strains of everyday life.

Perhaps the greatest practitioners of foot shooting are the media. As have entertainers, the media have elevated their political goals above their reason for being. Because a large fraction of their customers do not agree with those goals, their customer base is now far smaller than it used to be. Much of the media has given up any pretense of objectivity. “Fake news” is a reality. Credibility is their currency. Without it what are they? They certainly aren’t reporters or journalists.

The most pathetic and confused group of foot shooters are the Never-Trumpers, Bill Kristol, Jonah Goldberg, and George Will, for example. Donald Trump so offends their delicate sensitivities that they totally ignore how much he has accomplished for the conservative cause. They have made themselves irrelevant, fortunately. They have actually proclaimed that they wish Hillary Clinton were president. As John McEnroe used to say to the umpires, “You can’t be serious!” Can you imagine the kinds of Supreme Court picks Hillary would be making?

Actors, comedians, athletes, and the media have lost focus. What is transpiring shows too well the ugly results of politicizing every aspect of life. Politics is like a cancer destroying from within whatever it infests.

In a 2013 American Spectator column, “The Politicization Crusade,” I listed “language, science, health care, food, climate, cars, sports, education, the military, and sexual orientation” as examples of some of things that have been politicized. Since then, the list could be expanded and would include humor and children. Let’s hope that at some point the politicization crusade will go too far and end up consuming itself.