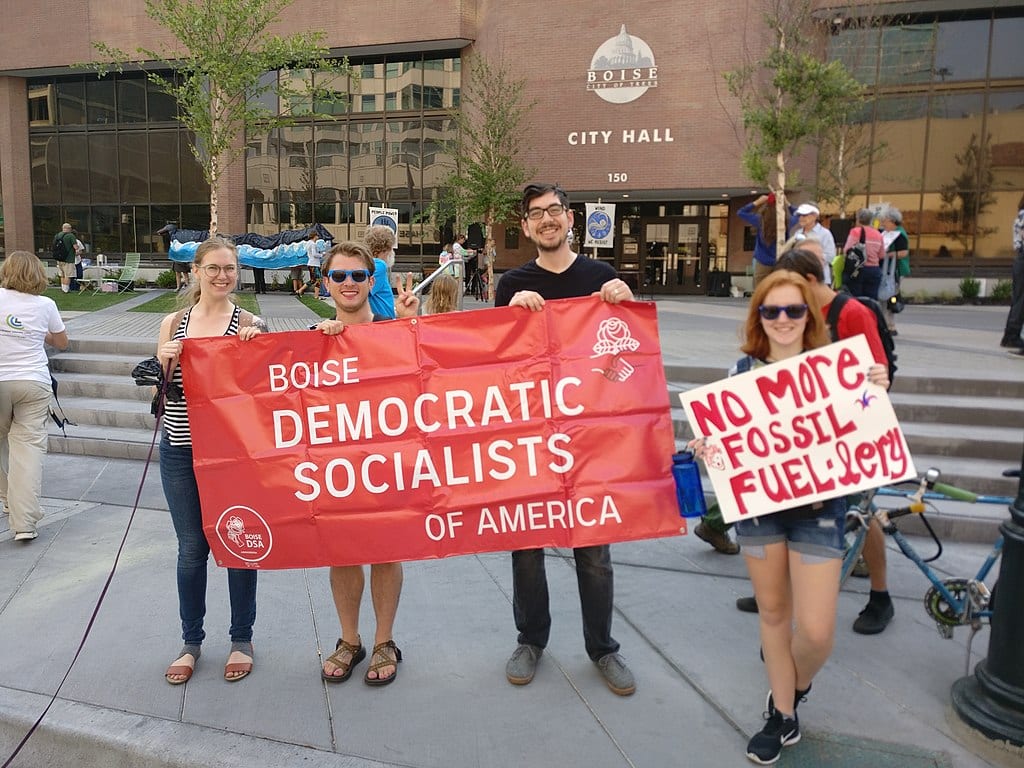 Throughout the 2018 campaign season, Democrats, pathologically obsessed with identity politics, were jazzed up about two particular candidates. One, of course, was Alexandria Ocasio-Cortez, who Democrats are slobbering over as their party’s new poster-girl. DNC chair Tom Perez gushes that the 29-year-old Ocasio-Cortez “represents the future of our party.”

What’s fascinating about that is that Ocasio-Cortez is not just a member of the Democratic Party; she’s also a member of the Democratic Socialists of America — the nation’s largest socialist organization. The DSA has surged from a membership of about 5,000 prior to November 2016 to over 40,000 by November 2018. Ocasio-Cortez’s success has prodded herds of excitable “progressives” to sign on the socialist line.

“The day after she won the Democratic nomination, the group had 1,152 people join its ranks — 35 times more than an average day,” reported the Hill. “The last time they saw a similar increase was the month after President Trump was elected.”

Not only is the DSA the hot new thing at your local Starbucks, but it’s also seeping into the Kultursmog at your insane local university.DSA boasts chapters on 217 campuses. And if Joe and Sally Liberal are too old to join up at the local college crazy-house, they can conveniently find a DSA revolutionary center at the nearest big city.

Or is she? Stop the press!

As I write, the grinning Ocasio-Cortez may need to turn over the crown to a grimacing gal who could emerge as a more spirited ringleader to rally the enraged new Democrat masses. The suddenly emergent challenger for the crown is one Rashida Harbi Tlaib.

If Ocasio-Cortez had sappy Democrats drooling back in November, Tlaib has them salivating as of this January. Tlaib’s coronation came in a celebratory coming-out party last week that has already gone viral, and may allow her to unseat Ocasio-Cortez as the left’s poster-girl.

That now historic moment in liberal lore arrived when the demure Ms. Tlaib, in speaking of President Donald J. Trump, defiantly shouted with fist in the air: “we’re gonna impeach the motherf—er!”

She made that subtle pledge at a reception hosted by the “progressive” group MoveOn.org on Capitol Hill last Thursday, just after her swearing-in ceremony aside her children. The room full of disciples of civility and tolerance went bananas, howling their applause, stomping their feet, pumping their arms, clapping joyously. No doubt they went to social media right away to lecture Donald Trump on tempering his foul, divisive language.

Particularly interesting in light of her vitriol is that the delicate Ms. Tlaib, mind you, is a Muslim. The lady’s rhetoric during this rant, I’m told, is not typical of traditional Islamic language. In fact, it begs a question of the Muslim Americans who voted for the freshman congresswoman: Is this what you want as your representative in the U.S. Congress? Is this the model for Muslim women in American politics?

Tlaib represents Dearborn, Michigan, the largest Muslim community in the United States. She’s now carrying the flag as the first Palestinian-Muslim woman in Congress. Are her Muslim constituents cool with this behavior?

I mean, gee, as a Christian I’ve always had differences with Muslims, but I thought I could count on them on certain matters of propriety. Muslim aren’t supposed to drink or swear, for instance, let alone curse like a drunken sailor.

Worse, Ms. Tlaib, who moments earlier was sworn in with her hand on the Koran, let loose her trash-mouth in the name of her son. Note her exact words to the whooping crowd (video here):

And when your son looks at you and says: “Mama, look, you won, bullies don’t win.” And I said: “Baby, they don’t, because we’re going to go in there and we’re going to impeach the motherf—er!”

Does the mother of two regret this language? To the contrary, she refused to apologize, doubling down the next day on Twitter with some juvenile #unapologeticallyMe slogan.

Well, I don’t know if that’s what Muslims want in a congresswoman, but it’s certainly what socialists — that is, democratic socialists, or Democrats — want. And that brings us back to the Democratic Socialists of America.

The 40-something Rashida Harbi Tlaib is, like Alexandria Ocasio-Cortez, a proud member of the Democratic Socialists of America. She likewise has embraced the Democrat donkey as a Trojan horse to deliver her socialist agenda.