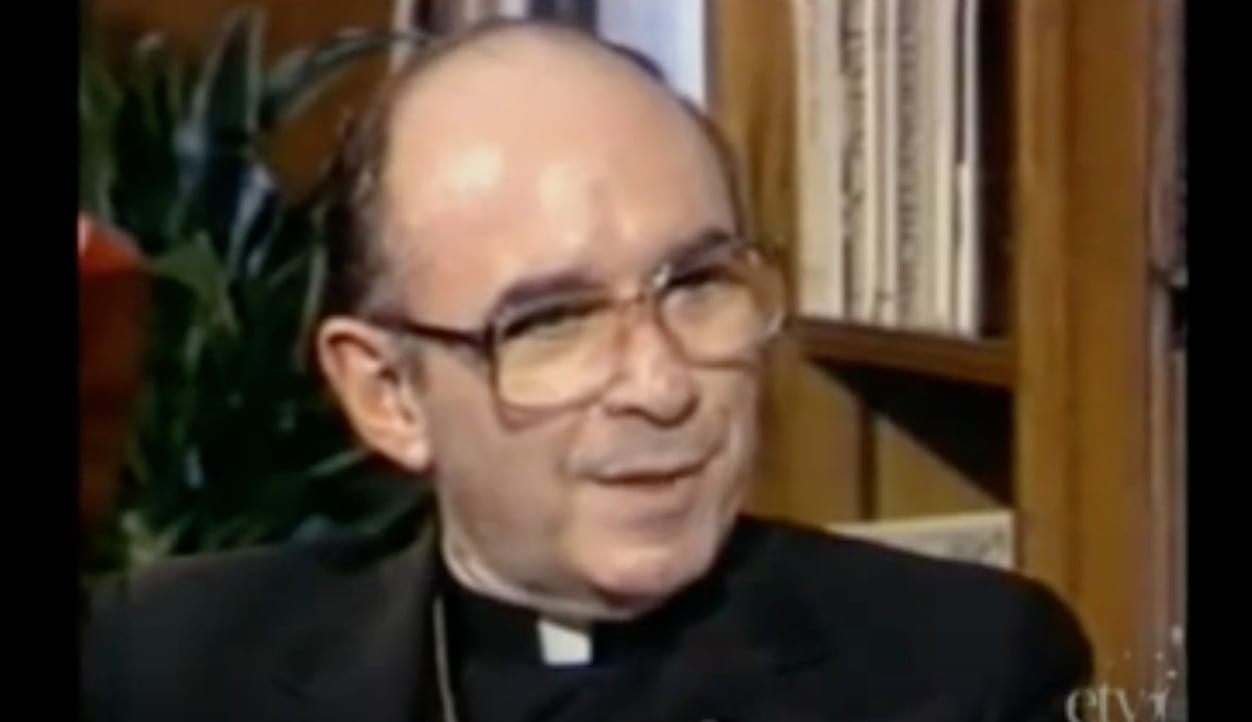 Joseph Cardinal Bernardin, the seventh archbishop of Chicago, was laid to rest on November 21, 1996. The most powerful and influential American prelate since the conservative bull dog of New York, Cardinal Francis Spellman, Bernardin had defined American Catholicism for over a quarter of a century. The destructive march of liberal pantsuit wearing nuns and creepy mustached hippy priests under felt banners adorned with cringe worthy Boomer-Latin phrases like “Pax” would not have been possible, or at least not as successful, without Joseph Bernardin, who oversaw the enforcement of the new changes mandated by the liberalizing Second Vatican Council in the United States.

The requiem mass of the powerful prelate, a native son of South Carolina, was deeply redolent of the left-wing cultural and political agenda that the cardinal attempted to affect in minds and hearts of American Catholics. The funeral music was comprised of a medley of languages and genres drawn from Negro spirituals such as “Give Me Jesus” and festive Spanish and Polish hymns with a “throw back” to Gregorian chant as a nod to whatever conservatives might attend. Interestingly, among the many diverse ensembles at the good cardinal’s funeral was the Windy City Gay Men’s Chorus, which the Washington Blade, the leading gay men’s magazine of the nation’s capital, later would state in 1997 had sung at the specific request of the late cardinal.

If so, then the His Eminence was winking at his supporters and trolling his enemies who had long suggested that Bernardin was a (barely) closeted gay man. Although having multiple allegations brought against him — the most famous being Steven Cook, a former seminarian who later recanted of his accusations against Bernardin before dying of AIDs in 1995 — and having a long history of covering up abuse, Bernardin went to his grave free of any conviction.

However, regardless of his personal skeletons, before his death of “pancreatic cancer,” Bernardin was able to give a precious gift to the Democratic Party: the Catholic vote.

While often not acknowledged as such, Bernardin was one of the most critical figures of the American left during the latter quarter of the 20th century. With the humiliating defeat of Jimmy Carter in the 1980 election, Bernardin and the radicalized members of the United States Conference of Catholic Bishops went to work to undermine the Reagan Revolution and buttress Kennedy-style Catholic liberals in the Democratic Party.

The first salvo that Bernardin launched at the Gipper was the 1983 USCCB pastoral letter, “The Challenge of Peace in Our Time: God’s Promise and Our Response.”  Released just two months after President Reagan’s announcement of the Strategic Defense Initiative, “The Challenge of Peace” was a direct attack on Reagan’s desire to win the Cold War peacefully through victory in the “arms race,” which the pastoral letter, flavored with the incense of the peacenik movement, calls “one of the greatest curses on the human race.”

As the 1984 election was approaching, Cardinal Bernardin and his cadre of Summer of Love holdouts in the Catholic episcopacy readied another attack on Cold War-Blue Dog-social conservative coalition.

One of the key elements holding this coalition was the Reagan White House’s commitment to the prolife cause, which Reagan’s Secretary of Health and Human Services, Richard Schweiker, had announced upon Reagan’s inauguration would be a central aspect of the incoming administration.

To diffuse the potent Christian case against the killing of developing human life in utero, Bernardin crafted the “Seamless Garment” argument, which he delivered to the world in his 1983 Fordham University Gannon lecture, “A Consistent Ethic of Life: An American-Catholic Dialogue.” The Seamless Garment argument essentially gave pro-choice Democrats the ability to counterbalance the prolife argument by stacking social justice issues like welfare support for Marxist guerrillas in Central America, and nuclear disarmament against abortion. Thus, a prochoice Democrat could merit the votes of Catholics as long as he or she supported the Marxist Sandinista government in Nicaragua or was opposed to outpacing the Soviet Union in nuclear technology.

“The Challenge of Peace,” “The Seamless Garment,” and even a Catholic Democratic vice-presidential candidate named Geraldine Ferraro were not enough to garner the support of Catholics, who voted 61-39 for Reagan over Walter Mondale.

However, well aware of the two-term limit for U.S. presidents and the reality that vice president George H.W. Bush was much less popular that Ronnie, Cardinal Bernardin & Co. hit the Reagan administration in 1986 with “Economic Justice for All: Pastoral Letter on Catholic Social Teaching and the U.S. Economy.” While the document does contain a number of salient and what Catholics traditionally would consider orthodox critiques of capitalism, “Economic Justice for All” not too subtly blames the Reagan administration’s economic and military spending policies for unemployment, poverty, and “discrimination” that existed throughout certain sectors of the U.S. economy.

As George H.W. Bush’s presidency came and went after the Reagan golden years, Bernardin and the USCCB finally got their man in the White House with William Jefferson Clinton. In order to buttress the Clinton administration as well as to suppress increasingly rising conservative and traditionalist voices within the Church itself, Bernardin crafted the Catholic Common Ground Initiative.

Springing from one of Cardinal Bernardin’s subtle masterpieces of left-wing realpolitik gaslighting, his 1992 letter to the priests of Chicago, “The Parish in the Local Church,” a document titled “Called to Be Catholic: Church in a Time of Parallel” was released by the Common Ground Initiative. A masterpiece of Boomer-tier, aging hippy subterfuge, “Called to Be Catholic,” sought to disarm the rising conservative and traditionalist Catholic movements and America that, by the 1990s, allied with Evangelicals and conservative Jews, were turning into powerful political forces. Loaded with plugs for feminism, the sexual revolution, and “minorities,” “Called to Be Catholic” reaffirmed the Seamless Garment ethic for the Clinton era, emphasizing, “the ways in which the church is present in political life, its responsibility to the poor and defenseless.”

Catholics voted for Bill Clinton 47-35 in 1992 and 55-35 in the 1996 victory over Bob Dole. For his efforts to diffuse the bite of conservative Catholicism, Bernardin received the Presidential Medal of Freedom from Clinton in September of 1996, just in time for the critical November election.

The efforts of Cardinal Bernardin and those prelates who followed in his wake were stunted under the conservative leaning pontificates of John Paul II and Benedict XVI. Beginning with John Paul II’s 1993 visiting to World Youth Day in Denver, a new Catholic (neo)conservativism arose in the United States. Further buttressed by conservative Catholic media outlets like EWTN, Crisis, the National Catholic Register, and, of course, First Things magazine as well as Catholic neoconservative pundit George Weigel’s 1999 magnum opus Witness to Hope: The Biography of John Paul II, a new conservative Catholicism sprung up in the United States, capturing the minds and hearts of the bulk of the Catholic population.

Old devotions like the rosary, the Eucharist, and veneration of the saints, which were mocked and discarded during the Bernardin era, were revived with gusto, and (mostly) traditional Catholic teaching on marriage and the family were being taught in a new fleet of conservative Catholic colleges such as the Franciscan University of Steubenville, Ave Maria, and Christendom College.

However, there was a fatal error baked into the cake of this new Catholic conservativism: many of its leaders, including Fr. Richard John Neuhaus, Michael Novak, George Weigel, and Princeton University’s Robert P. George, yoked themselves to the neoconservative wing of the Republican Party. As the War on Terror dragged on during the Bush era and grew increasingly unpopular among the American people, including many conservative Catholics who had initially supported it, many leaders of the new Catholic conservatism found themselves speaking to an increasingly dwindling or even hostile audience.

The revamped conservative American Catholicism was further battered by the election of Barack Obama to the U.S. presidency and the election of Jorge Bergoglio as Pope Francis, the 265th successor of St. Peter.

During the Obama-Francis era, social justice became cool again among American Catholics. Yet, while embracing climate change, LGBT rights, and fetishizing of migrants as superheroes, American Catholics did not seem to want to engage in the wholesale rejection of traditional Catholic piety and theology that marked the Bernardin era. As a result, the leadership of the new Catholic left wisely jettisoned the excesses of the Bernardin era and has attempted a synthesis of radical left-wing politics with some aspects of traditional Catholic piety.

America Magazine, a veritable cringe compilation of bugmen, winebox cat ladies, rainbow flag Absolute Vodka toting SJW priests, and “radical chic” (but not too radical that white liberals won’t give her a job) Chicana militants, is ground zero of the new “LeftCat” movement channeling the spirit of Cardinal Bernardin into the Trump Era. Appearing like a collage of 4Chan memes, America’s writers are helping to radicalize a new generation of Catholics who want to be hip but still return some traditional Catholic devotions.

The grand dame of America is Fr. James Martin, S.J. Mirroring the late Cardinal Bernardin’s success in trying to effect radical change in the Church but maintaining the position of “friendly (but creepy) uncle” with moderate and mild-mannered views, Fr. Martin has almost single-handedly midwifed the new LeftCat movement to millennials and Generation Z through a deluge of media in support of “migrants” and “the LGBT community” as well as opposition to the death penalty while at the same time plastering his online presence with references to Catholic saints and support for the prolife movement. A successful author and guest on late night TV, Fr. Martin has perfected Cardinal Bernardin’s m.o. of charmingly changing the morals and political views of Catholics while constantly protesting his fidelity to the Church when under criticism.

With Fr. Martin as its poster boy, America has waged a Bernardinesque war on President Trump, vomiting a stream of pro-illegal immigrant pieces, along with support for Black Lives Matter, Antifa, and constant handwringing about “institutional racism,” sexism, homophobia, as well as endorsements of “prolife Democrats” like John Bel Edwards of Louisiana.

However, while this sort of trickery might have worked in the 1970s or 1980s when liberal American Catholics could sit in their comfortable all white suburbs and small towns fantasying about themselves as civil rights crusaders, the Trump era is a much different animal. We are in a crisis situation in our country in which the Bernardin era issues of “poverty” or “nuclear disarmament” have been replaced by the urgency of our survival as a country.

As 2020 approaches, American Catholics under the cloud of humiliation resulting from the abuse scandals (many of which are fallout from the Bernardin era) and a constant barrage of rewarmed theological Marxism from the See of Peter itself, will be tasked with the burden of not only making America, but the Church, great again.