by David Catron
Warren, Sanders, and Biden at the Democratic debates on CNN Tuesday night. 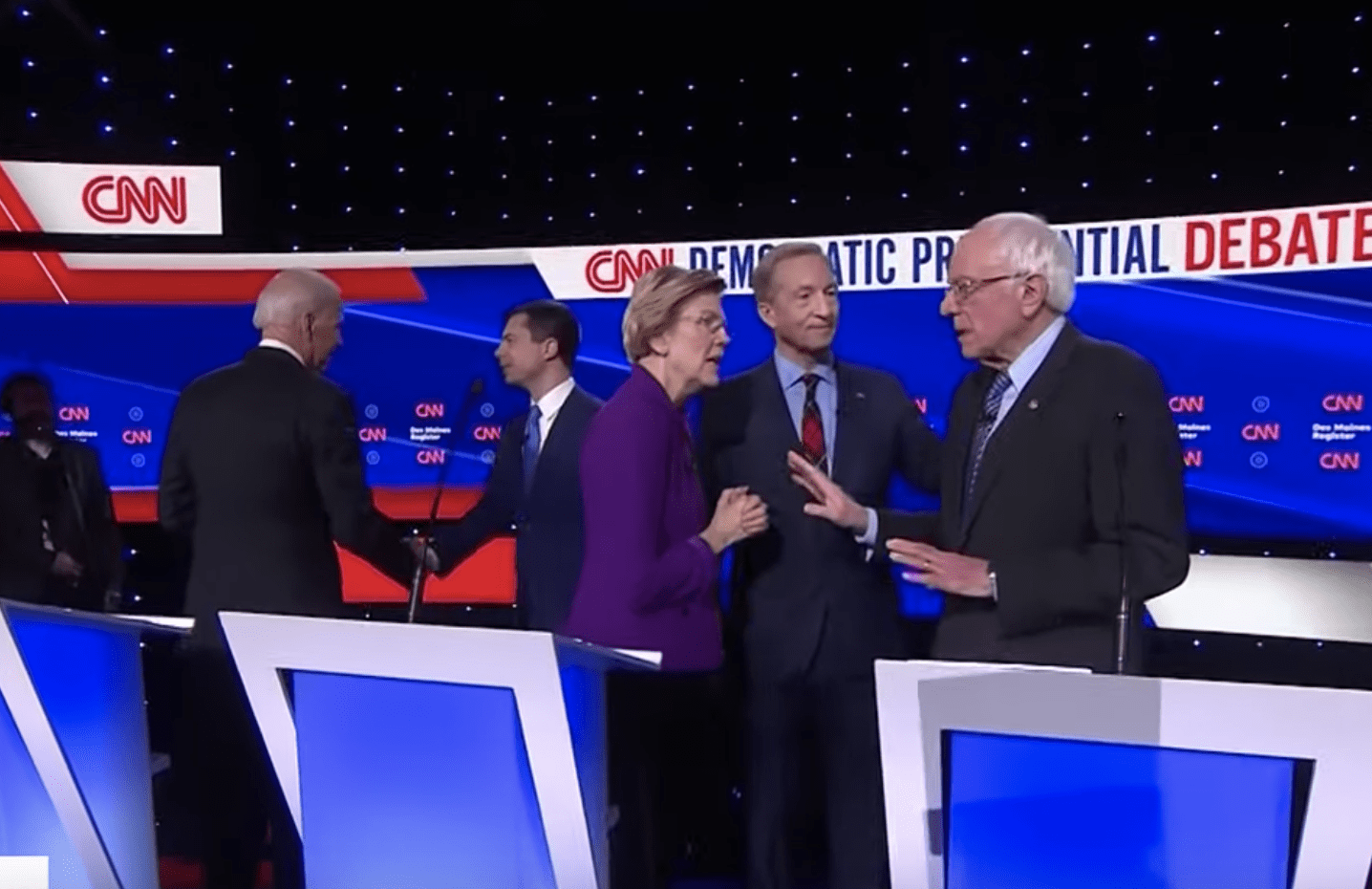 The Left’s reaction to CNN’s hostility toward Sen. Bernie Sanders during Tuesday night’s Democratic presidential debate inevitably evokes that classic Casablanca scene in which Renault indignantly declares, “I’m shocked — shocked — to find that gambling is going on in here!” Renault isn’t actually surprised, of course. He’s smart enough to know exactly what’s been happening at Rick’s. The same cannot be said for Sanders supporters and what’s been going on at CNN. They credulously watched for three years as its “journalists” accused President Trump, without a scrap of evidence, of colluding with Russia to steal the 2016 election and still believed the cable network was in the news business.

Consequently, when the CNN moderators gave Sanders the Trump treatment, the outraged ululations of the Left could be heard from sea to shining sea. Rolling Stone’s Matt Taibbi tweeted, “This is an unusually vile performance by CNN.” The Nation’s Elie Mystal raged, “Jesus Christ I hate these biased questions from the moderators. ‘How would you keep your plan from bankrupting the country?’ JUST ASK THE KOCH BROTHERS TO MODERATE NEXT TIME!” HuffPost’s Zach Carter griped about CNN’s post-debate panel discussion, “CNN’s crew is just straight bashing Sanders post-debate.” The New Republic’s Libby Watson whined, “CNN is truly a terrible influence on this country.”

Hmm … Where have we heard that before? Oh, that’s right. Conservatives have been making the same point for decades, only to be sneered at by progressives who insisted that such claims were conspiracy theories. In reality, it has long been obvious that CNN operates more like the PR department for the Democratic National Committee (DNC) than a legitimate news outlet. The last time Sanders ran for president, CNN commentator Donna Brazile gave Hillary Clinton advance copies of debate questions during the Democratic primary. It was CNN’s Candy Crowley who jumped in to back up erstwhile President Barack Obama on a brazen lie about Benghazi during a debate with Mitt Romney.

If it isn’t obvious, the DNC is terrified of Sanders. They know he doesn’t have a prayer of beating Trump and that the latter would like nothing better than to run against an unrepentant socialist. The problem is that Sanders is doing better than expected in the polls, particularly in Iowa and New Hampshire. If he beats Biden in either or both of those contests, his chances of winning the Democratic presidential nomination will rise dramatically. His momentum will increase further if the purported front-runner for the nomination, former Vice President Joe Biden, continues to have episodes of incoherent maundering. He had one Tuesday night when asked how he would handle North Korea:

I would be putting what I did as vice president — I met with Xi Jinping more than anyone else. I would be putting pressure on China to put pressure on Korea, to cease and desist from their nuclear power, make — their efforts to deal with nuclear weapons. I would move forward as we did before — and you reported it extensively, Wolf — about moving forward the whole notion of defense against nuclear weapons, that we would — and when China said to me, when Xi Jinping said to me, that’s a threat to us, I said, we’re going to move and protect our interests unless you get involved and protect it.

If your father or uncle started talking like this at a holiday dinner, you would legitimately wonder if he was in the midst of a stroke and consider calling an ambulance. Yet none of the CNN moderators pointed out that he had not only failed to answer the question but that what did come out of his mouth also failed to rise above the level of gibberish. No one asked him if he had understood the question or requested that he confine his responses to English. Instead, they accepted at face value similarly incoherent answers about whether or not he would pull all of our troops out of the Middle East. Why? Their target for Tuesday was Sanders. CNN went after him even before the debate, in this John King segment:

While the new spending programs Sen. Bernie Sanders has proposed in his presidential campaign would at least double federal spending over the next decade, he has faced almost no questions from other candidates or the media — on the eve of the last debate before primary voting begins — about how he would implement or finance such a massive increase. The Vermont independent’s agenda represents an expansion of government’s cost and size unprecedented since World War II, according to estimates from his own website and projections by a wide variety of fiscal experts.

This same theme was taken up by CNN’s Abby Phillip at the debate when she asked Sanders how he would keep his plans “from bankrupting the country.” This is an excellent question, of course, and Sanders’ answer was hopelessly inadequate: “No, our plan wouldn’t bankrupt the country. And, in fact, it would much improve the wellbeing of working-class families and the middle class.” This is preposterous, of course, but the point here is that Sanders was the only candidate getting such tough questions. The CNN moderators went after the senator while letting equally absurd answers from Biden, Warren, et al., slide. This somehow shocked Sanders’ supporters despite countless warnings from conservatives.

This is the lesson the Left should learn from CNN’s performance during Tuesday night’s debate. When progressives turn a blind eye to unfair media coverage of conservatives and Republicans, they set their own candidates up for similar treatment. When they tacitly approve the unethical behavior of people like Donna Brazile, Candy Crowley, and Abby Phillip, the Left empowers a corporate beast that will pick up their scent sooner or later. It has no ideology beyond money and power, and it will not lose its appetite when their opponents have been digested. If progressives will stop and consider what conservatives have been telling them about the media, it could be “the beginning of a beautiful friendship.”