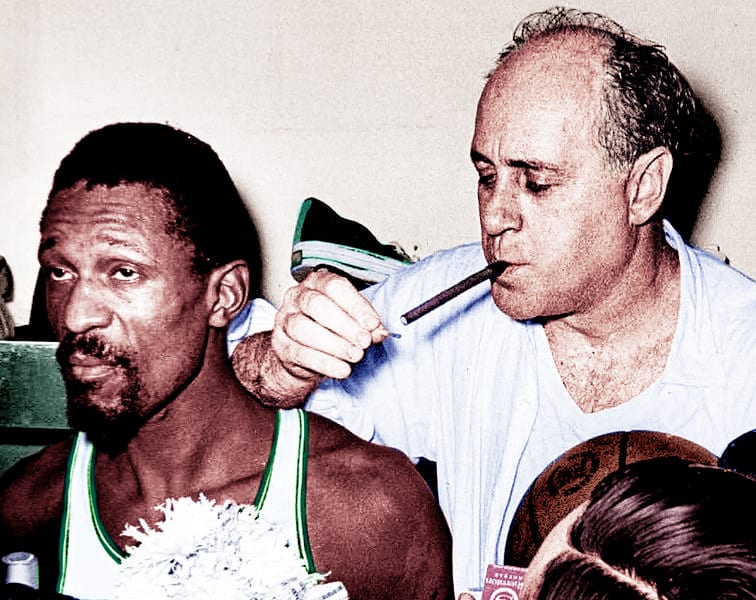 What in the world is the matter with people in Boston? The idea of honoring the legendary Red Auerbach during, one presumes, a brain storming session at the BPD public affairs command, was excellent. The cop who came up with this deserves a medal, well, at least a “well done” letter from the Chief.

Kevin White, may he rest in peace, might be thinking, in the great City Hall up in the sky, “If only I had thought o’ that…”

But wait — it is not the people of Boston who rose up with one voice against honoring Red Auerbach as a man of significance to Americans of African ancestry, or of “black” cultural identity, such as Dorothy Dandridge and, more lately, Megan Markle. No, and nor do I know, without evidence, if it was Bostonians of said ancestry and personal feelings of identity.

But whoever they are, they scared the cops into rescinding an honor, which is unfortunate and even execrable. It is like these universities that invite people to talk and then they back down when some goofball “activist” movement rises with one voice (a voice of hate) to say said invitee is a fascist or an ornithologist, whatever the week’s fashion calls for.

In fact, the instigators are most likely what used to be called racial arsonists. These are people who instigate, or encourage, race war. They set the one race against the other race.

They are motivated by hate and resentment, and they are, in American history, predominantly of the European ancestry and the “white” cultural identity. As Jeff Lord, my distinguished colleague, has often shown in these pages, they are overwhelmingly, history-wise, Democrats. In this case, who knows? Nihilo-commie-stalinoid-islamosymps trying to stir up the unlamented screeches of the anti-police movements of recent years?

To get a sense of what they are suggesting, in vilifying the police department for reminding their neighbors (since Boston’s other public servants, such as the teachers, are failing in that area) that Red Auerbach contributed hugely, at a time when few contributed at all, to the integration of sports in America. As such he certainly played an important role in American history. Anyone who cares for so important a change in American society as the end of segregation by race ought to be thankful.

The fact that the great Boston Celtics coach was a man of flaws as well as outstanding qualities makes the police salute to him only more, what is the word?, human. After all, history, certainly black American history, is about human beings, not vindictive feelings. Those big cigars with which he celebrated wins over Mr. Pleszczynski’s beloved Lakers stank (at least to L.A. fans) and would not pass today’s anti-tobacco laws the police are required to enforce.  That today Boston fuzz can remember what matters and shrug off the foul habits of yesteryear ought to inspire social justice warriors to be more social and thus perhaps a little more just.

If you don’t want to be thankful, at least allow as how this man impacted our country in precisely the way you are (supposedly) reminded this month.

Actually, the Boston PD, or other important institutions in this and other municipalities, can surely think of many individuals whose stories warrant attention during these weeks. There is, for instance, Branch Rickey. There is Julius Rosenthal. There is Walter Reuther.

I am merely suggesting a few examples from different walks of life, sports, education, labor relations. I am reminded of Tom Kahn. And of a great Howard University professor, Bernard Fall. On the military side there was John J. Pershing, and of course on the subject of the military, President Harry Truman, who ordered equality in the ranks.

It is simply ridiculous to think of “black” American history without reference to “white” Americans, just as only a cretin can conceive of “white” American history without reference to “black” ones. I thought Albert Murray settled this question long ago. His books are fascinating and, unfortunately perhaps, quite pertinent still; you may want to start with The Omni-Americans, and move on to Train Whistle Guitar and Stomping the Blues.

You could also read William Faulkner, Ralph Ellison, and — oy, this is so sad, does anyone still read anyone I have mentioned in this sad piece? Okay, take this:

There’s a yellow girl in Texas

That I’m going down to see
No other darkies know her
No darkey, only me
She cried so when I left her
That it like to broke my heart,
And if I only find her
we never more will part

This was the original of the marching song of the Texas Brigade during the Civil War, but as they were aligned on the side of the Confederacy, the soldiers replaced a few words to better reflect their thoughts and longings. In the altered version, give or take other small alterations, the song was widely popular as late as the early rock ’n’ roll years.

It’s only pop music, but maybe this, too, ought to be pondered during this studious month.