by David Catron
Nancy Pelosi on July 16, before the House passed a resolution condemning Trump for his “racist comments.” Image: Andrew Caballero-Reynolds/AFP 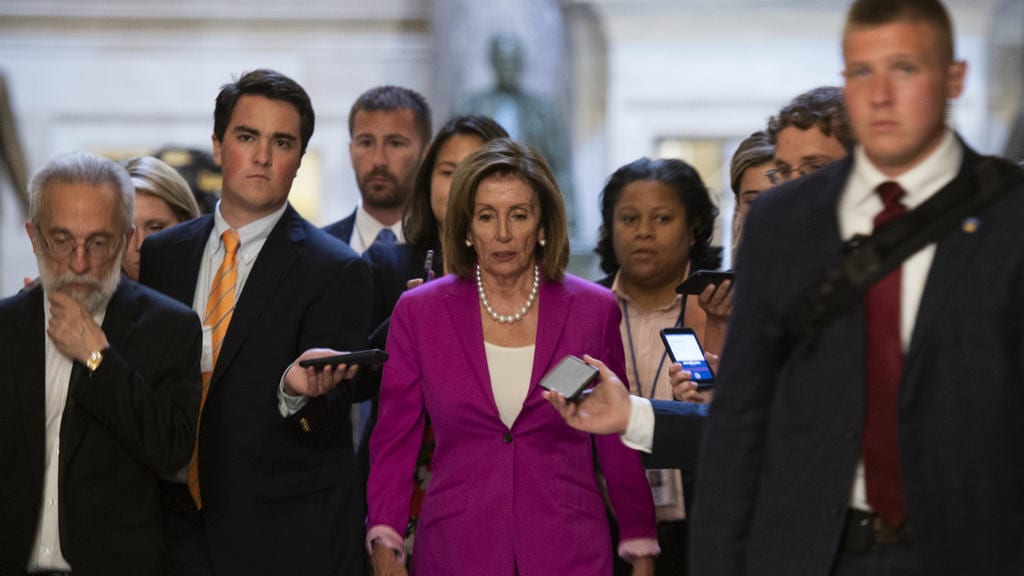 It’s increasingly obvious that the Democratic Party is moribund and that its members know it. In a desperate attempt to survive, they have declared war on a chimera called “racism,” which they insist is endemic to American culture. Left-wing Democrats call centrist members of their own caucus racist for voting their conscience. Freshman Democrats accuse the Speaker of the House of racism for requesting that they behave with decorum. All Democrats insist that all Republicans are racists while attributing all GOP election victories to racial gerrymandering, racist voters, or both. And every Republican president is racist by definition — particularly if his surname is Trump.

Meanwhile, in order to signal that they are also on the side of the angels in this epic battle against bigotry, the “news” media wield their mighty pens on behalf of the noble cause. A textbook example of the assistance they offer to “the party of Jefferson and Jackson” can be found in a recent New Republic column titled “Trump and His Deplorables.” Its author, Matt Ford, begins by praising Hillary Clinton’s 2016 observation that “you could put half of Trump’s supporters into what I call the basket of deplorables.” He then goes on to tell his readers that Clinton’s cavalier condemnation of 30 million voters was a highly nuanced argument whose wisdom has long since been vindicated:

Two years into Trump’s presidency, “deplorable” seems almost kind. It’s clear by now that racism is an animating force of Trump’s presidency, yet many of Trump’s supporters and most of the Republican Party still back him after every bigoted slight and discriminatory policy he makes. They may not be willing to admit that they agree outright with everything he says or does, but their continued political support makes the distinction meaningless.

The problem with this passage isn’t merely that it is gratuitously defamatory and demonstrably false, but that it tends to reinforce the sense of moral superiority that defines “progressives” like Ford and the politicians who actually take them seriously. It creates a positive feedback loop that allows both to justify outrageous behavior that neither would consider without mutual encouragement. It permits journalists to delegitimize those who disagree with them about Trump and also permits Democratic lawmakers to take the floor in the House of Representatives and accuse the president of racism — knowing full well that doing so violates a decades-old parliamentary rule.

This brings us to the question that very few have bothered to ask about Trump’s Sunday morning tweet storm: Was it actually racist? I didn’t bother to read the tweets when they first appeared. Nor was I moved to do so in response to the subsequent uproar. Everything the president says or does is instantly denounced by the Democrats and their media allies as racist, cruel, crazy, or crass. So it just sounded like another day at the office for Trump. I finally got around to reading them today and fail to see the catalogue of crimes his critics claim to see. Not that mere facts matter to the Democrats or the social justice warriors of today’s media, as Goldie Taylor makes clear in the Daily Beast:

The president is a racist … On Sunday, he claimed that newly elected progressive Democrats “originally came from countries whose governments are a complete and total catastrophe” and “the worst, more corrupt and inept anywhere in the world.” And he told freshmen Reps. Ayanna Pressley, Rashida Tlaib, Alexandria Ocasio-Cortez and Ilhan Omar — outspoken Democratic women of color who have challenged the administration’s inhumane immigration policies — to leave the country.

But he didn’t do anything of the sort. First, none of the tweets contain any reference to the race of any congressional representative. Not a single, solitary syllable. So, how precisely can Taylor honestly denounce them as racist? Moreover, it is by no means clear that he is referring to all four of the congresswomen she names. He pluralizes some words for general effect just as I do with “journalists” in paragraph four above, but this is hardly definitive. The tweets are obviously about Ilhan Omar, a Somali immigrant who routinely gripes about the “racism, cruelty, and injustice” of her adopted country, and throws in the occasional anti-Semitic slur to just to keep the pot bubbling.

In fact, her anti-Semitic comments caused so much uproar last February that considerable pressure was put on the Democratic majority in the House to pass a resolution condemning her comments. But Speaker of the House Nancy Pelosi, the same Democrat representative who violated the rules of that body in order to call the president a “racist,” could not muster the votes to get it passed. Instead, the Democrats passed a generic resolution against hate speech that not only failed to mention Omar’s name, but also failed to mention anti-Semitism. As a clearly angry Rep. Liz Cheney put it, “I voted against the Democrats’ sham resolution — it was designed to protect anti-Semitic bigotry.”

The very Democrats who covered for a brazen anti-Semitic bigot would have us believe they are outraged by the president’s “racist” tweets. None of this is about racism or bigotry. It’s about a dying animal called the Democratic Party, hatred for the man administering the lethal injection, and the voters who support him. As Goldie Taylor says, “Trump Is a Racist. If You Still Support Him, So Are You.” As it happens, the House held a vote Wednesday afternoon to impeach the president. It failed 332 to 95. The increasingly shrill cries of racism are just the death throes of a political party that reviles the United States, President Trump, and the voters they can no longer fool.