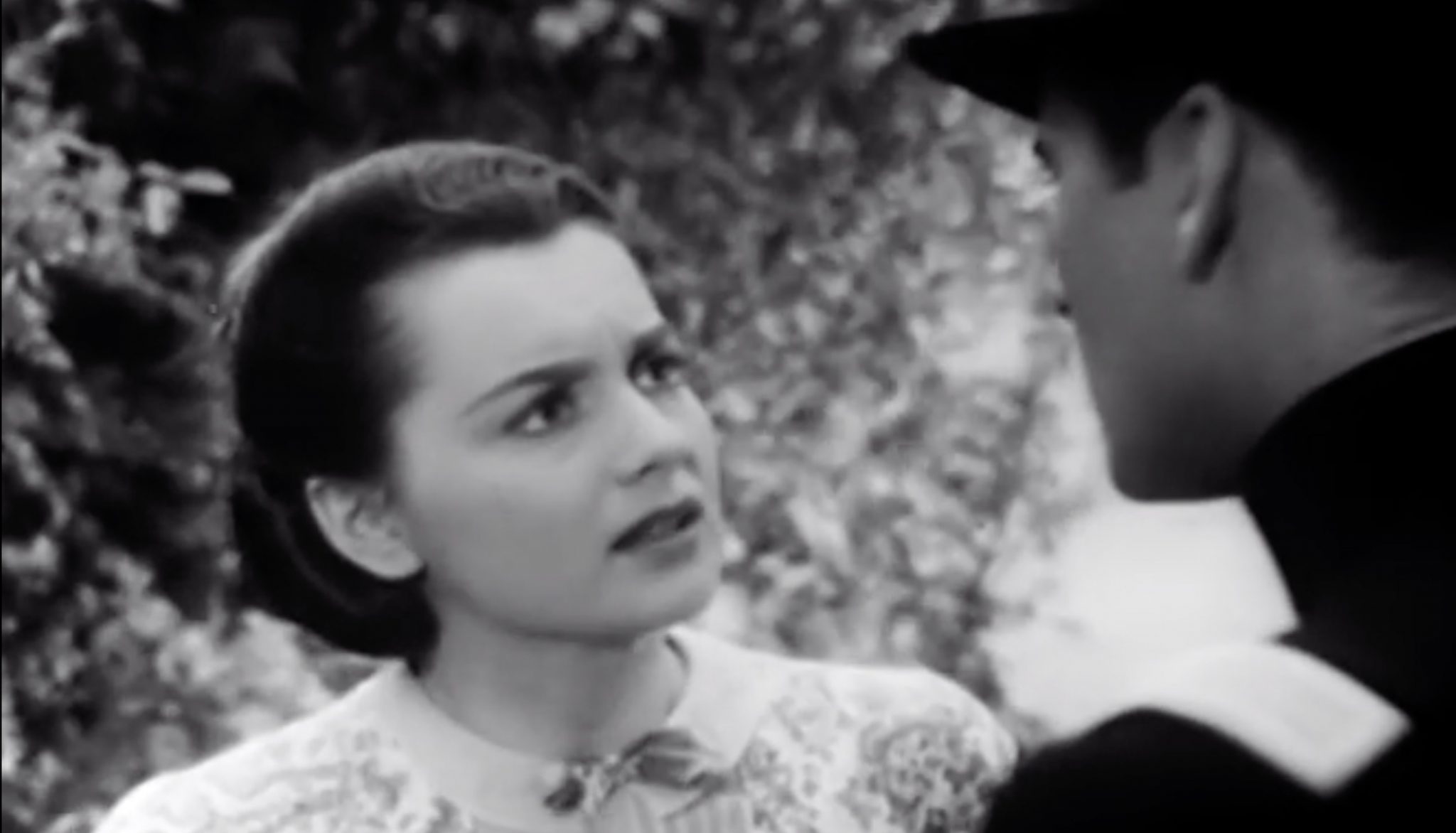 Yesterday morning I caught a headline I expected to see many years ago: “Actress Olivia de Havilland, Dead.”

I’ve long been a fan of Olivia de Havilland’s films as well as her political-ideological story. I’ve watched in amazement as she pushed toward the century mark, and then continued past it. She lived to the age of 104. Yes, 104. The legendary actress, most famous for the wonderful role of the saintly Melanie in the 1939 epic Gone With the Wind, died peacefully in her sleep in Paris.

Whereas others have written about de Havilland’s filmography, I’ve written about her political-ideological sojourn, particularly a series of remarkable moments with Ronald Reagan and Hollywood communists in 1946, which marked a turning point for both her and the future president.

Even worse for Hollywood’s apparatchiks, she warned liberals about being used by communists, noting that secret Marxists “frequently join liberal organizations.”

Reagan at that point considered himself a “hemophiliac liberal.” The FDR Democrat had “blindly and busily” joined “every organization I could find that would guarantee to save the world.” That included groups like the Hollywood Independent Citizens Committee of the Arts, Sciences, and Professions — known as “HICCASP.” It was one of several Hollywood “progressive” groups that Reagan later referred to when admitting he had been very “naïve,” and through which he regrettably had become “an active (though unconscious) partisan in what now and then turned out to be communist causes.” The duped Reagan saw the folks at HICCASP and similar organizations (like the American Veterans Committee and the Progressive Citizens of America) as “liberals, and being liberals ourselves, [we] bedded down with them.”

Reagan started coming to his senses and took a bold stand at a HICCASP meeting on July 2, 1946. He had been asked to serve on the board of the group, of which de Havilland had been a member and close and increasingly suspicious observer. Reagan received a baptism by fire that day. He teamed up with group member James Roosevelt, son of Franklin Delano Roosevelt. Like Reagan, James Roosevelt was a non-communist liberal. Roosevelt had suggested a group statement repudiating communism. At the very least, this would be a good PR move, given that HICCASP was being suspected as a communist front.

What Roosevelt and Reagan witnessed in response to that simple request was nothing short of “a Kilkenny brawl” (in Reagan’s words). One screenwriter (whom Reagan generously left unnamed in his written account of this episode) barked that if a war broke out between the United States and USSR he would voluntarily take up arms for Stalin. The musician Artie Shaw leapt up and offered to recite the words of the Soviet “constitution” from memory, which, he claimed, was “a lot more democratic” than the U.S. Constitution. (When Shaw had asked de Havilland if she had read the Soviet constitution, she replied, “No, I haven’t — and how recently have you read ours?”)

Leading the assault that day were the interminably abusive John Howard Lawson and Dalton Trumbo, both closet members of Communist Party USA and both leading the peanut gallery in denouncing Reagan as an “enemy of the proletariat,” “capitalist scum,” a “witch-hunter,” a “red-baiter,” and, naturally, a “fascist.” Lawson got in Reagan’s face, leveling his finger and “telling off” (Reagan’s words) the young actor. Reagan later said the atmosphere was so distressing that one woman (a liberal) had to be removed from what was later diagnosed as a heart attack. Reagan was shell-shocked at the vehemence of these fellow “progressives.”

Joining Reagan in this sudden awakening was Olivia de Havilland, who had been witnessing and receiving the same awful treatment. Havilland, too, was being exploited by these self-described “progressives” and becoming steadily aware of their manipulation. Like Reagan, they tapped her to give public speeches against fascism and other causes — though never against communism. An omission that she, too, had curiously noticed.

A few days before the HICCASP blow-up for Reagan, de Havilland had been handed a speech by Dalton Trumbo for a rally in Seattle. The text seemed remarkably pro-Soviet, with no mention of any criticisms of communism. On top of that, the speech vilified the Truman administration as an anti-Semitic, racist, union-busting, war-mongering imperial regime ready for aggression against an angelic USSR. (For an excellent account, see Ron and Allis Radosh’s Red Star Over Hollywood). It was the standard Soviet–CPUSA partly line.

But Olivia de Havilland refused to be a stooge for Stalin. Not only did she ditch Trumbo’s Marxist text, requesting and receiving another from writer Ernest Pascal, but she also delivered a stern rejection of communism. She told the rally, “We believe in democracy, and not in communism.” Even worse for Hollywood’s apparatchiks, she warned liberals about being used by communists, noting that secret Marxists “frequently join liberal organizations.” They did this to prey on the trusting liberals in their midst. And while such was “their right,” noted de Havilland, it was also the right of liberals “to see that they do not control us, or guide us … or represent us.”

When Hollywood’s Bolsheviks learned what Olivia de Havilland had done, they were enraged. As chronicled in Kenneth Lloyd Billingsley’s Hollywood Party, Trumbo and Lawson, true to form, launched into their usual childish fits of vitriolic name-calling. (Trumbo was recently canonized as a “progressive” victim of “McCarthyism” in the hagiographic 2015 film for suckers, Trumbo.) If these Hollywood commissars had had their own mini-gulag somewhere between Seattle and Los Angeles, pretty little Olivia would have been there, with shaved head, shivering in a dark cell, by morning.

Thus, Olivia de Havilland was already on to the reds as Reagan and James Roosevelt were absorbing the Lawson–Trumbo tirade at the HICCASP board meeting. Dore Schary, a non-communist liberal and RKO executive, witnessed what happened to Reagan and Roosevelt that evening. He quietly approached them after the eruption and invited them to a small gathering at de Havilland’s home. When Reagan and Roosevelt arrived, they got the scoop. A relieved Reagan told de Havilland that he had figured she was one of “them.” She smiled and said she was not. (A Hollywood friend of mine today owns that de Havilland house.)

Reagan and de Havilland already knew one another, particularly from the 1940 film they did together with Errol Flynn, Santa Fe Trail (in my opinion, she was at her prettiest in that film). Now they had an even tighter bond.

Reagan stepped down from HICCASP, with other true liberals soon following. For Reagan, like de Havilland, this was a time of serious awakening. Something was not quite right in the “progressive” camp in Hollywood.

De Havilland then and thereafter would be described as an anti-communist liberal. (Whether she would be a liberal by today’s standards is another issue.) There were many good anti-communist liberals in those days and throughout the Cold War. My book Dupes took care to point them out and credit them. They included the likes of Arthur M. Schlesinger Jr., George Kennan, Sen. Thomas Dodd, Congressman Francis Walters, Congressman Richard Ichord, Sen. Paul Douglas, William C. Bullitt, John F. Kennedy, Bobby Kennedy, F. Scott Fitzgerald, Henry “Scoop” Jackson, Mary McCarthy, Sam Nunn, Lionel and Diana Trilling, and from Hollywood Budd Schulberg, John L. Leech, Edward Dmytryk, and Elia Kazan, to name just a short few (many of them ex-communists). Noteworthy were two anti-communist liberals who were good friends of Bob Tyrrell and The American Spectator: Sidney Hook and Daniel Patrick Moynihan.

There’s also a marquee list of liberal Hollywood actors and actresses who were duped by communists: Humphrey Bogart and Lauren Bacall, Judy Garland, John Garfield, Edward G. Robinson, Burl Ives, Ira Gershwin, Katharine Hepburn, Gene Kelly, Danny Kaye, Gregory Peck, and many, many more. Many of these individuals were victims of one of the worst communist front groups of the era, the Committee for the First Amendment, which descended on Washington in October 1947. The ringleaders of that communist front enraged Humphrey Bogart because of how they lied to and humiliated him, happily willing to destroy his reputation and career. “You f–kers sold me out!” Bogart screamed at them.

Many of these Hollywood liberals, like Olivia de Havilland and Ronald Reagan, wised up, learned, and redeemed themselves.

Unfortunately, today’s liberals too often ignore these Cold Warriors of the Left — or more importantly, the crucial lessons. Our liberals at our colleges are taught a ludicrously simplistic narrative of fanged McCarthyites on one side, who wrongly suspected a red under every bed, and innocent liberals on the other side, who were tragic victims of tail-gunner Joe’s rampage — and nary a real communist anywhere in all of California.

If the anti-communist liberals of the 1940s were around today, they would plead with liberals to not be dupes to communist or far-left causes. A genuine liberal should not support Marxism, socialism, or the ridiculous rubbish peddled under the name of “democratic socialism.” Any potential red flags (pun intended) among groups like the Democratic Socialists of America, Antifa, or the founders of Black Lives Matter should not be laughed at or dismissed. The old liberals would inform today’s liberals that, yes, extremists exist on the left as well as the right. There is a far Left, and good liberals should speak out against it.

Olivia de Havilland was one such liberal. She had been duped before, and she wasn’t going to let it happen again. As stated by historian John Meroney, who interviewed her in 2006, “Ms. de Havilland felt a great sense of personal betrayal that the communists had used her, other celebrities, and liberalism as covers for their party work.”

Quite sadly, de Havilland lived long enough to find today’s Left engaging in blacklisting. Today the process is called “canceling.” Her greatest film, Gone With the Wind, is now targeted by the cancel culture.

The far Left went after Olivia de Havilland in Hollywood over 70 years ago. Now, leftists target her work once again, posthumously.

May this lovely and smart lady rest in peace, free from the ideological madness.