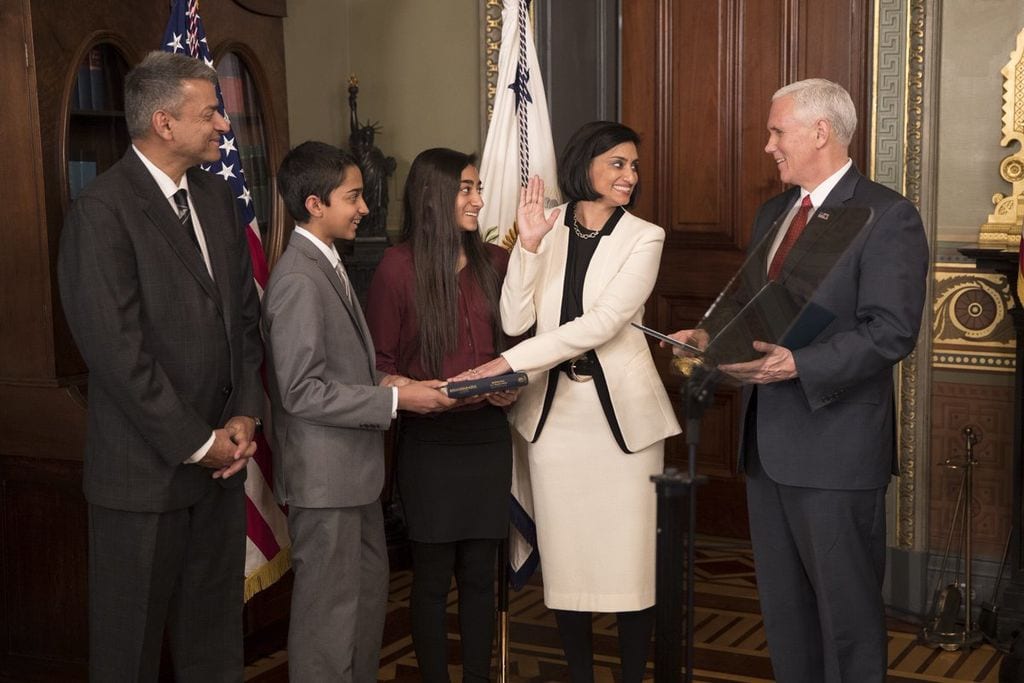 When the Centers for Medicare & Medicaid Services (CMS) announced that states could experiment with work requirements and volunteer community service as prerequisites for Medicaid eligibility, the melodramatic response from the Democrats and their media allies was as predictable as it was mendacious. House Democratic Leader Nancy Pelosi summed up the position of her congressional accomplices by vehemently denouncing the new CMS policy as “mean-spirited,” “cynical,” and “spiteful.” And USA Today captured the gist of the “news” coverage with a work of fiction titled, “Medicaid work requirements are a throwback to rejected racial stereotypes.”

Never mind that the announcement contains no reference or allusion to ethnicity in any context whatsoever, unless one counts its explicit stipulation that participating states “must comply with federal civil rights laws.” Forget that the primary architect of the new policy is an Indian-American,  CMS administrator Seema Verma, who cannot be characterized by any honest, or even sane, observer as a white supremacist. USA Today nonetheless advises its readers, without offering the smallest scrap of supporting evidence, that the policy is an “attempt to perpetuate myths that stereotype people of color and stigmatize popular public programs that opponents simply don’t like.”

The USA Today op-ed constitutes a classic example of the smug ignorance for which progressives are so notorious. Its authors obviously assume that white people would somehow escape the imagined negative effects of the new CMS policy. If these “journalists” had bothered to do their homework, they would realize that the single largest ethnic cohort of non-elderly Medicaid enrollees consists of white people. As this chart from the Kaiser Family Foundation shows, fully 43 percent of Americans covered by the program are lily white. Hispanics and African Americans account for 30 percent and 18 percent respectively. The remaining 9 percent are listed as “other.”

In other words, unless you’re a hopelessly lazy journalist, a math-challenged progressive, or both, there’s no plausible way to make the racism charge stick. But what about the charge that CMS is somehow cruel? Nancy Pelosi is by no means alone in suggesting that CMS is now run by “mean-spirited” and “spiteful” people for whom work requirements are just a pretext to deny health care to millions of vulnerable Americans. The Connecticut Mirror quotes Daniel P. Malloy, the Democratic governor of the Nutmeg State, thus: “This decision by the Trump administration isn’t driven by thoughtful policy consideration, and will cause real harm to families across the country.”

What Pelosi and Malloy seem to have forgotten is that work requirements for government benefits is not an untested idea. In August of 1996, under considerable bipartisan pressure from Congress, President Clinton signed a welfare reform bill, a conspicuous provision of which was a work requirement not unlike that which CMS has authorized the states to use with Medicaid enrollees. At the time, the work requirement was denounced by the left as was Clinton himself. Critics of welfare reform, like today’s critics of CMS, portentously predicted wrack and ruin. But, as those notorious right-wingers at the Brookings Institution reported in “Welfare Reform Worked,” these critics were wrong:

They predicted that poor women and their children deprived of welfare would die in the streets.… The data refute these dire predictions. In fact, according to Census Bureau data, between 1996 and 2000, the percentage of never-married mothers in jobs increased by about a third (to 66%), while the poverty rate for these mothers and their children declined by about a third (to 40%). For the poorest of the poor, this large an improvement based on their own efforts was unprecedented.

Another factor that the critics of CMS have forgotten is Seema Verma herself. This is not her first rodeo where Medicaid reform is concerned. Before becoming Trump’s CMS administrator, Verma created one of the nation’s most innovative Medicaid programs during Mike Pence’s tenure as Indiana’s governor. After the advent of Obamacare, Verma took the state’s existing Medicaid program, the Healthy Indiana Plan (HIP), down the expansion path. Unlike other expansion states, however, HIP 2.0 used a consumer-driven model for able-bodied adults. Its system of incentives involved members in their health care decisions and, according to the Indiana Hospital Association, it works:

So, based on the apparent success of consumer-driven Medicaid reform in Indiana and positive results of the work requirements associated with welfare reform on a national scale, the decision by the Trump administration to “support state efforts to test incentives that make participation in work or other community engagement a requirement for continued Medicaid eligibility” seems pretty sound. That impression is evidently shared by the officials of a number of states. Kentucky was the first state to take advantage of the new CMS policy, and, according to Reuters, Arizona, Arkansas, Indiana, Kansas, Maine, New Hampshire, North Carolina, Utah, and Wisconsin may soon follow suit.

Democrat/MSM propaganda notwithstanding, the CMS decision to support states that wish to use a work requirement as a prerequisite for continued Medicaid eligibility for able-bodied adults seems eminently reasonable. Medicaid reform is one of the nation’s most pressing domestic issues and the Trump administration is simply allowing the states to bring their creative energy to bear on the problem. This is not racist. This is not mean-spirited. It is an all-too-rare commodity called “leadership.”