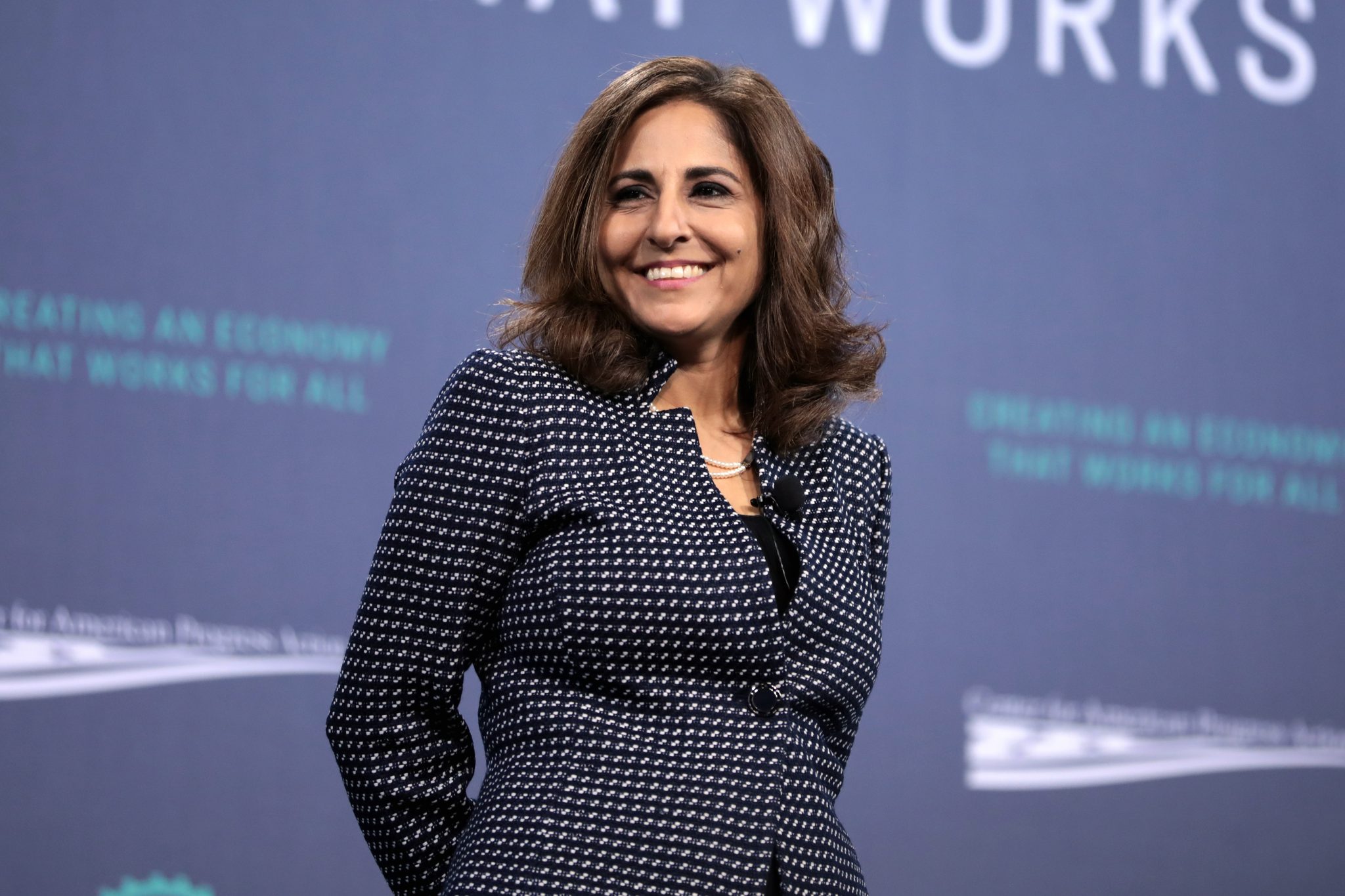 A vote to confirm Tanden as the new budget director will occur in the coming days, during an ongoing impeachment trial of a president who no longer lives in the White House. If confirmed, Tanden will have to work closely with Republican and Democrat members of Congress on oversight, preparing annual budgets that total roughly $4 trillion, and appropriating spending levels for the federal government.

This might prove to be a rather difficult task for Tanden, given that she seems to have disdain for Republican senators of all persuasions, be they moderate or ideological, young or old, male or female, from the Midwest, the South, or the Northeast. Tanden is among the least “unifying” of any of Biden’s cabinet picks, and thus does not appear to be well suited for the role of director of OMB, to put it mildly.

A brief review of her Twitter account confirms as much. Or at least it did before she purged her pages of some of her most inflammatory and insulting remarks against Republican members of Congress. More on this in a bit.

By now, many Americans are well aware that posting offensive comments on social media can result in being terminated from a job or expelled from an institution, which can in turn prevent future employment opportunities.

Correction: many Americans are well aware that those who espouse left-wing ideologies are given carte blanche to post whatever incendiary or hateful rhetoric their heart desires while facing nonexistent or minimal backlash from their employers. Conservatives are afforded no such luxury. Instead, they are blacklisted, persecuted, scorned, mocked, and silenced into submission. If they misspeak, they must wear the scarlet letter and forever repent for their misdeeds.

Perhaps no sitting member of Congress has been the beneficiary of leftist privilege more than Rep. Ilhan Omar of Minnesota. In 2012, before she was a member of Congress, Omar tweeted,“Israel has hypnotized the world, may Allah awaken the people and help them see the evil doings of Israel. #Gaza #Palestine #Israel.”

When her abhorrent tweet was uncovered in 2019, just days after she was sworn in, Omar issued an “apology” but did not appear to show much remorse for her anti-Semitic comments. In fact, she doubled down on her bigotry and turned herself into a victim, tweeting, “It is important that when you see oppression taking place – when you see our values being attacked as humans – you stand up, and it doesn’t matter who the inhabitors of that particular region might be…. There are many narratives of who and what I am, designed to demonize and vilify me.”

In other words, anyone who would dare attack the sanctimonious Omar for making anti-Semitic remarks is simply projecting their own misogynist and Islamophobic views onto her.

What was Omar’s punishment for her ignorant statement?

The Democrat-controlled House passed a mostly symbolic resolution condemning anti-Semitism without specifically mentioning Omar by name. To this day, Omar continues to serve on the House Foreign Affairs Committee, the House Budget Committee, and the House Education and Labor Committee.

On the other hand, when GOP Rep. Marjorie Taylor Greene of Georgia was found to have made indefensible comments on social media prior to becoming a sitting member of Congress about issues ranging from 9/11 to school shootings to forest fires, she was promptly removed from her committee assignments and was attacked by CNN and every other mainstream news outlet for her lack of remorse. Rep. Marjorie Taylor Greene’s “stunning non-apology last week on the floor of the House, and her subsequent social media post and press conference, were an object lesson in how not to seriously seek forgiveness,” CNN wrote.

One can argue whether or not Greene’s apology was sincere, but even if she broke down in tears and personally apologized to every member of Congress, it would not have made a difference. Republicans never receive the benefit of the doubt. They do not have their Fourth Estate guardians to “contextualize” every malefaction that occurs. They do not have disingenuous and phony activist “fact checkers,” who are willing to say that two plus two equals seven if that’s what it takes to protect someone on their team.

This brings us back to the curious case of Neera Tanden. Last November, when it became clear that Tanden was to become Biden’s nominee for OMB, she promptly scrubbed more than 1,000 of her derogatory tweets.

Some of her greatest hits included accusing the Russians of helping to elect former President Trump and calling Republicans “criminally ignorant,” “corrupt,” and “the worst.” She called Sen. Tom Cotton “a fraud,” referred to Sen. Susan Collins as “the worst,” proclaimed that “vampires have more heart than Ted Cruz,” and called Sen. Mitch McConnell “Moscow Mitch” and referred to him as “Voldemort.”

During Tuesday’s hearing, Sen. Rob Portman asked Tanden about some of these troubling comments. She was no doubt aware that the question would come up, yet she still gave a half-hearted response.

“I deeply regret and apologize for my language and some of my past language, I recognize that this role is a bipartisan role, and I know I have to earn the trust of senators across the board,” she said. She could not bring herself to apologize for the ad hominem attacks that she made against the Republican senators whom she had personally singled out, nor could she at the very least say that she did not think the Republican Senate leader was Voldemort.

Tanden also did not apologize after Sen. James Lankford voiced his concern about her past support of Obama’s contraceptive mandate, which she called “a political cudgel, helping isolate extreme anti-choice advocates from the mainstream.” Chief among those “extreme” advocates? Pro-life religious groups such as Little Sisters of the Poor, who simply wanted to avoid providing contraceptives to their own employees in their health plans.

“For anyone offended by my language, I feel badly about that,” Tanden said. Why is it that whenever Democrats “apologize” for their derogatory comments they find a way to blame the people who were offended?

In one particularly revealing exchange with Sen. John Kennedy, after he repeatedly asked Tanden if she stood by her past statements, she was reluctant to take any responsibility for her rhetoric. But she did manage to blame social media for creating division, and explained that the “polarizing” climate that we were in during the previous administration was the real problem. In other words, she regrets and concedes nothing. Tanden must have attended a Hillary Clinton fake apology seminar.

Can anyone guess what the reaction from the Democrats and the media would have been if it was discovered that Trump’s OMB Director Mick Mulvaney had referred to Sen. Cory Booker as heartless, or compared then-Sen. Kamala Harris to the most evil character in a fantasy series full of despicable characters? Cries of racism and sexism would have abounded, and there would have been immediate calls for the withdrawal of Mulvaney’s nomination.

Instead, here is how NPR described Tanden’s confirmation hearing: “Tanden was contrite, apologizing for her remarks. She also promised to work in a bipartisan manner if she’s confirmed…. Republicans’ complaints would carry more weight if they still held the majority in the Senate. But with Democrats now controlling the chamber, the GOP has little power to block Tanden’s confirmation.”

Got that? Never mind what Tanden said in the past. She apologized, it’s time to move on, and there’s nothing Republicans can do about it anyway, the taxpayer-funded media outlet says.

More consequential than Tanden’s lack of contrition, though, are the policies that she intends to support if she is confirmed as the budget director. Tanden, who served as a long-time aide to Hillary Clinton and was the president of the left-wing think tank Center for American Progress (CAP), also played a pivotal role in crafting the Affordable Care Act when she worked at the Department of Health and Human Services under President Obama.

Tanden wrote in a lengthy article last year that she wants to massively raise taxes on corporations and supports universal health care and universal paid leave. She has called for a “National Health Service Corps,” which would involve hiring 200,000 new health-care workers. She wants to hire thousands of people for “retrofitting public buildings,” and “build[ing] charging stations,” and she cheered on what she called the collapse of the oil and gas industries.

As if those policy considerations were not already cause for concern, Tanden is bought and paid for by foreign governments and special interest groups. While she was president of CAP, she received $2.5 million from the UAE; $1 million from a managing partner of Bain Capital, a private equity firm with strong ties to China; and $665,000 from Mark Zuckerberg’s foundation. Curiously, when Trump signed a trade deal last year that put China on notice, Tanden called it “a weak deal with China that makes clear that his administration’s failed trade strategy has been all pain and no gain.”

Instead of governing for all Americans, which Biden has repeatedly promised, he has decided to usurp Congress and impose his radical agenda through policies that destroy energy jobs, favor teachers unions over students, and put American citizens last.

Biden’s choice of Tanden shows that he is more than happy to appoint progressives with no intention of reaching across the aisle.

Biden’s “unity” train has left the station, and it’s never coming back.