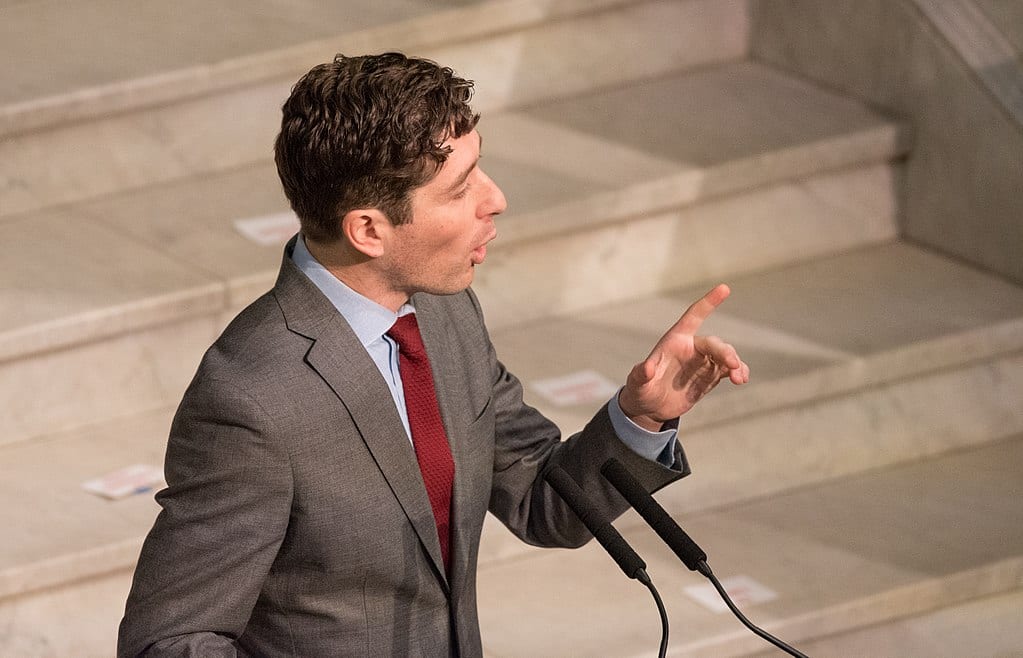 I’m so old that I remember when the major rage among Democrat machine politicians seeking public approval to maintain their iron-fisted control over American cities was to present themselves as “technocrats” — capable administrators who would make few political waves but rather focus on non-sexy items like transportation, drainage, garbage pickup, economic development, urban renewal, and public works.

Of course, technocracy came and went without very much in the way of actual results in urban management. And today’s generation of Democrat machine politicians in charge of our cities don’t bother trying to sell themselves as capable administrators anymore. How can they, when Los Angeles’ trash piles rival those of Kinshasa, homeless bums micturate on passing taxicabs on New York streets, it’s recommended that one wear galoshes on the streets of San Francisco so as to avoid ruining one’s Ferragamos by stepping in freshly-lain human feculence, and New Orleans is inundated each time there’s a hard rain because the city’s pumps and drainage infrastructure are virtually untouched by improvement despite billions in spending for just that purpose?

At some point you can’t sell yourself as a technocrat when the place is demonstrably worse off than when you found it. At that point you need a new hook for the rubes, because even though much of the Democrats’ mismanagement of our cities has run off their middle class residents in their millions it’s possible the remainder might get wise to the grift and throw the bums out.

Which cannot happen. In the event a Philadelphia, Cleveland, Baltimore, or Portland might turn the Democrats out of power (this is a hypothetical, of course; calm down) and newly-empowered Republicans would get to examine the books, losing an election would generally be the least of the problems for the operators of those machines. Perhaps then some of these statesmen and Public Servants might do for Leavenworth and Marion and Victorville what they’ve done for Newark and Jackson and Flint.

We know what the new hook is. It’s cultural Marxism and in particular Critical Race Theory, the simplest functional definition of which is the nonstop agitation of those under your power along racial lines so as to make them completely dysfunctional in their relations with one another without your expert hand guiding them.

Which brings us to Minneapolis, the hometown of the illustrious illegal immigrant and tax-evading congresswoman Ilhan Omar.

And one Jacob Frey, the Democrat mayor of the City of Lakes, who thought it a wonderful idea to commemorate the 400th anniversary of black slaves arriving at the English colony at Jamestown, Virginia by holding something the city’s “Racial Equity Coordinators” call “400 Years of Resistance and Liberation. Remembering, Recovering, Reimagining — Sacred Conversations with City Staff.”

There were never black slaves in Minneapolis, unless perhaps some were brought by recent Somali immigrants to that city given that black slavery is alive and well in Somalia (perhaps Rep. Omar might speak on the subject with more expertise than your author). It would appear more appropriate that Minneapolis celebrate its historical status as a refuge for escaped and freed slaves in the 19th century, but that isn’t the kind of thing that would hook in the rubes, is it?

So instead we must have Sacred Conversations. And it gets even better. As PowerLine’s John Hinderaker notes, the project instantly fell into difficulty and the “sacred conversations” have been “postponed because of internal controversy over the segregation of ‘Black Bodied Staff’ and ‘White Bodied Staff,’ which is not just offensive but painfully stupid.” Because Heaven forbid the black bodies and white bodies might converse freely and find their lives and experiences aren’t so different after all — what, then, would be the basis by which to judge the performance of Minneapolis’ dominant political machine?

Nothing they’d want to be judged by, that’s for sure. This is a city which allowed an interstate highway bridge over the Mississippi River to collapse, after all, and where welfare fraud is so pervasive that more than $100 million in cash departed via the city’s airport to Third World countries in 2017 to fund… Allah knows what.

But the Sacred Conversations controversy did manage to spark the interest of Peter Kirsanow, a member of the U.S. Commission on Human Rights and a great American, who chose to address Frey with a deliciously caustic poison pen in hand. As Hinderaker quotes from Kirsanow’s letter…

When planning workplace functions, it’s usually a good idea to ask, “Could this be mistaken for an episode of ‘The Office?’” Unfortunately, someone in Minneapolis city government forgot to ask this basic question.

***
According to the Minneapolis Star-Tribune, the June 27th session was to have the theme of “recovering our narratives of oppression and liberation”. During the session, “black bodied” employees were to be separated from “white bodied” employees, ostensibly because they are the two groups who were historically affected by slavery. Does everyone automatically get either a scarlet letter or a gold star just because their skin is roughly the same shade as slave owners or slaves who lived somewhere other than Minneapolis 160 years ago? What if a black person who’s a recent immigrant is descended from slave traders in Africa? Do we send him to the “oppressor” lecture with the “white-bodied” folks, or the “victim” lecture with the “black-bodied” folks? And what about Asian and Hispanic employees? Where do they fit into the Oppression Olympics?

In addition to being galactically stupid, dividing employees by race and haranguing members of one race is presumptively illegal (Really. Not kidding. I looked it up. Shocked the heck outta me too.). Title VII makes it illegal “to discriminate against any individual with respect to his compensation, terms, conditions, or privileges of employment, because of such individual’s race, color, . . or to limit, segregate or classify his employees or applicants for employment in any way which would deprive or tend to deprive any individual of employment opportunities or otherwise adversely affect his status as an employee, because of such individual’s race, color”. This is exactly what the City of Minneapolis proposes to do, plumbing depths of cluelessness heretofore reached only by Michael Scott and Dwight Schrute.

You have naturally — unless you live in Minneapolis and perhaps not even then — heard nothing of Frey’s “sacred conversations.” Because these things are not for the consumption of the middle class in the suburbs, who are not the intended audience for the racial bonfires of the Left and would not react in the proper way to them in any event. They are for those under the power of the Jacob Freys of the world, who must be whipped into a constant racial froth, lest someone someday note that typhus and measles are not supposed to be modern-day public health threats and that potholes which are only filled when someone uses spray paint to name them after Confederate war heroes don’t present a positive reflection of local urban governance.

But that said, idiocy such as Minneapolis’ “Sacred Conversations” does have a pronounced salutary effect for the Democrats’ political machines. Meet White Liberal America, which positively detests its biological relatives…

Over the past decade, the baseline attitudes expressed by white liberals on racial and social justice questions have become radically more liberal. In one especially telling example of the broader trend, white liberals recently became the only demographic group in America to display a pro-outgroup bias–meaning that among all the different groups surveyed white liberals were the only one that expressed a preference for other racial and ethnic communities above their own…

In a recent Vox article based partly on the dissertation research I’ve been doing as a Ph.D. candidate in political science at Georgia State University, Matthew Yglesias described this ongoing transformation as “The Great Awokening.” In Yglesias’ account: “In the past five years, white liberals have moved so far to the left on questions of race and racism that they are now, on these issues, to the left of even the typical black voter. This change amounts to a ‘Great Awokening.'” There is no simple or single explanation for how this process got started. It appears to be driven by an interplay of factors: preexisting tendencies among white liberals; a series of polarizing events like the police shooting of Michael Brown and subsequent riots in Ferguson, and the migrant crisis; the rise of millennials as a political force, and the explosion of social media and “woke” clickbait journalism. The years between 2012 and 2016 were [to] have implications that go beyond race: They are also tied to a significant decrease in support for Israel and–perhaps more surprisingly–a rise in the number of white liberals who express negative attitudes about the perceived political power of American Jews.

To say such radical outgroup biases are unnatural — unprecedented, perhaps — is grossly insufficient. It takes sustained, purposeful indoctrination by educational and cultural institutions to manifest it.

To combat this requires draining those institutions of resources. At some point the conservative movement needs a wartime consiglieri — or several — willing to devise strategies to do so.

I saw a meme on Facebook Monday admonishing me as someone preferring sexual relations with the opposite sex with the approbation that I should be less interested in a Straight Pride Parade than grateful that I don’t need one.

But the reason the Straight Pride Parade has become such an issue is that straight people now do believe we need one.

If you believe in biblical teachings on the subject — which do not much differ from the teachings of every great world religion, by the way — and don’t think it’s appropriate for homosexuality and other more exotic expressions of personal libido to be glorified, in today’s culture you are castigated as a bigot, or worse.

Meanwhile the popular culture immerses us in homosexuality: HBO just concluded the first season of an ongoing series based on the diaries of a 19th century lesbian landowner in Yorkshire entitled Gentleman Jack, and from having watched it with meager interest (it came on immediately following Chernobyl and had as part of its subject matter the birth of the coal industry in northern England) I can testify there is virtually nothing in the plot of that series to justify the show’s production outside of the “necessity” to have a period piece about lesbians.

It was one thing when gay characters were a requirement in every movie and TV show produced by Hollywood. Now not only do the main characters have to be gay but their homosexuality has to be the main theme of the show.

Where does it end? Don’t tell me — I don’t think I want to know.

Scott McKay
Follow Their Stories:
View More
Scott McKay is publisher of the Hayride, which offers news and commentary on Louisiana and national politics. He’s also a novelist — check out his first book “Animus: A Tale of Ardenia,” available in Kindle and paperback.
Most Popular
1
The Right Prescription
Who Believes the Lockdowns Were About Science?
by David Catron