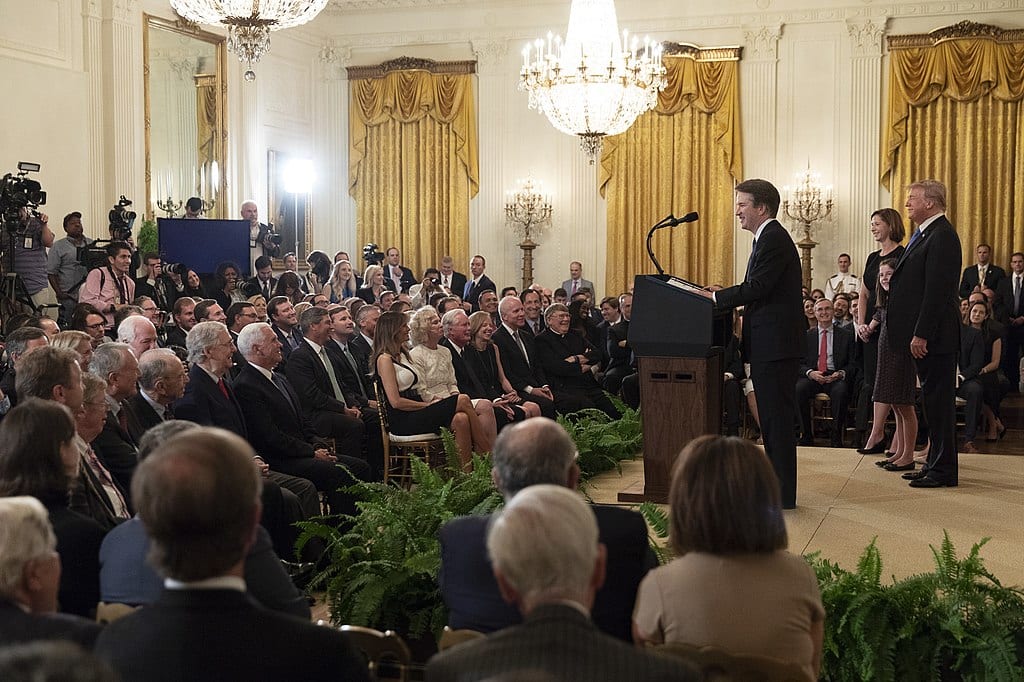 Who knew? Leftists have discovered to their horror that judicial government might not be good for them. Turning power over to judges might be a bad idea. Jurists can work for the other side. They can impose hostile values. They can undermine democracy. Someone needs to do something!

Slate recently hosted a debate among analysts over what to do about the looming threat posed by the horrid angry partisan Brett Kavanaugh. Having dominated the court for decades and relied on it to impose policy outcomes without popular support, they appear shell-shocked.

For instance, Slate’s Mark Joseph Stern warned that the newly confirmed Kavanaugh “will become part of a five-justice-conservative block that will swiftly roll back decades of progressive jurisprudence.” Alas, there is little evidence that any such reversal is likely, or likely to be swift — remember Chief Justice John Roberts’ determination to uphold Obamacare on grounds that even the left didn’t take seriously, that the program was a tax. Nevertheless, the imagined progressive golden age inaugurated by enlightened lawyers is going a-glimmering.

Given the fact that it has taken a half dozen GOP presidents decades to create a seemingly “conservative” majority, which has its own divisions over such issues as executive power and civil liberties, liberals shouldn’t whine. They have long enjoyed the benefits of an activist judiciary which only slowed down in recent years. It seems only fair for democratic change to eventually transform the court.

What most concerns Stern, however, is that the high court will do what it has always done, toss out measures which violate the Constitution: “[A]s soon as Kavanaugh takes the oath, he will plunge the Supreme Court into a legitimacy crisis that could weaken its power over the long term. This crisis will become particularly acute if Democrats retake Congress and the presidency but find their reforms stymied by a reactionary judiciary. The broad consensus over the court’s authority to interpret the Constitution will crumble.”

Yet the justices have been doing the same for years against more conservative governments. Courts have overturned policies involving welfare, criminal penalties, abortion, contraception, prison conditions, education, housing, zoning, employment, gay marriage, and much more. Stern acknowledged that because of Justices Sandra Day O’Connor and Anthony Kennedy, even the Republican-dominated high court for years “handed the left a stream of victories.” For many on the right, the judiciary long ago became illegitimate. There were efforts to impeach liberal Chief Justice Earl Warren. Right-leaning politicians proposed stripping the courts of jurisdiction over controverted issues. And activists made the membership of the Supreme Court a political issue.

But now, looking into the judicial future, liberals see Hades rather than paradise. So SOMETHING MUST BE DONE. Stern imagines “Democrats marching in the streets, demanding that the president and Congress ignore” rulings they don’t like. He projects Democratic officials implementing policies despite contrary high court rulings, rather like when President Andrew Jackson reportedly said of Chief Justice John Marshall, regarding a decision to protect Native Americans: “Marshall has made his ruling. Let him enforce it.”

Stern also embraces federalism. Maybe blue states will resist court rulings: after all, a lot of experience was gained as part of the South’s Massive Resistance against desegregation. At least Stern recognizes “the danger in adopting the tactics of segregationists,” but offers no alternative. Of course, he does not suggest that liberals, like conservatives before them, just suck it up and accept that there are consequences of losing elections.

Also in Slate, law professors Daniel Hemel and Christopher Jon Sprigman debated how “progressives should react to the right-wing takeover of the judicial system as heralded by the seating of Supreme Court Justice Brett Kavanaugh.” The University of Chicago’s Hemel argued that “we are a lot better off with the Supreme Court in its current form as a check.”

Indeed, noted Hemel, “progressive presidents sometimes trample over civil liberties.” For instance, he explained: “Take away the court’s power to strike down popular laws and we’re back to a world in which flag burning is banned, the Pledge of Allegiance is mandatory in schools, the press is subject to prior restraint, and public employees are prohibited from speaking out on matters of public concern.” With the high court most likely to fail the left by omission, not intervening to introduce a progressive paradise, he prefers “to have a court that sometimes underpolices than to have no cop on the beat.”

What to do? He proposes delaying the start of a justice’s term until the president appointing him or her leaves office.

The idea is to ensure justices are not allied with the presidents who appointed them. But when has that been an issue? Richard Nixon lost 9-0 when the Supreme Court ruled on his attempt to use executive privilege to shield tapes of his Oval Office conversations. That’s not much of a left-wing agenda.

New York University’s Sprigman sees less reason to support the Supreme Court. He believes federal judges are “more likely to join in the attack” on American democracy. And he has little respect for supposedly leading progressive decisions. For instance, he recognizes that Roe v. Wade helped jump-start the modern conservative movement. What he really despises is constitutionalism and belief in limits on government. Wrote Sprigman:

Ultimately, the left would be well-advised to get over its unrequited crush on courts and judicial review, as well as the delusion that our old, terse Constitution has much to say about modern problems. It does not, and in any event, too much constitutionalism, like too much democracy, can be dangerous to self-governance and can even destroy a society. The surest and most durable route to progressive change is through the ballot box, and not the courthouse doors.

In response he suggests ending life tenure for judges, which actually is a good idea that the right should get behind. Sprigman urges court-packing by increasing the number of justices, but that only works once. Then it will be matched by the other side. Finally, he believes Congress should be able to overrule the judiciary, allowing it to declare that “notwithstanding” a court ruling, the affected law will take effect. Ironically, that is something many on the right once might have supported.

Sprigman’s fundamental error is to place democracy rather than liberty at the center of the political system. Turning political questions into judicial decisions “withers democracy,” he complains. True, but so what? Democracy is a means to an end, the best practical mode of governing a liberal, free society. But the end should be the free society.

We can only hope that Brett Kavanaugh’s arrival on the Supreme Court will result in the horrors of which the left warns: government as we know it will disappear, people will be free to live their lives as they wish, and impending progressive political triumphs will be thwarted. Unfortunately, the result is likely to be far more equivocal. Nevertheless, for now schadenfreude offers cause for satisfaction: after spending decades promoting government by judiciary, the left has discovered the wonders of democracy. Maybe eventually they will come to appreciate the value of liberty.

Doug Bandow is a Senior Fellow at the Cato Institute. A former Special Assistant to President Ronald Reagan, he is a graduate of Stanford Law School and a member of the California and D.C. bars.