Buy the Book Gen. Mark Milley,Japan,Pacific,Pearl Harbor,World War II Leadership Command From Admiral Nimitz - The American Spectator | USA News and Politics
Menu
Buy the Book
Leadership Command From Admiral Nimitz
“Nimitz’s greatness lay less in his ability to do great things than in his facility to convince others that they could do great things.”
by Jack Park
Bronze statue of Adm. Chester Nimitz in Honolulu, Hawaii (Benny Marty/Shutterstock)

We have no dearth of Political Generals, that is, with a capital “P.” Gen. Mark Milley, for example, claimed to be so fearful of former President Donald Trump, his “nominal” civilian superior, that he made secret calls to his Chinese counterpart to tell him America had no plans to attack and that he would give him a heads-up if that changed. Milley did that because he “felt no absolute certainty that the military could control or trust Trump,” according to Washington Post journalists Bob Woodward and Robert Costa.

There are also the lowercase “p” political skills that it would be good for a commander to possess, although it’s not clear that all of them do. 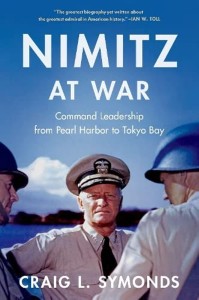 In his portrait of Adm. Chester Nimitz, Craig L. Symonds, professor emeritus of naval history at the U.S. Naval Academy, shows that not only did Nimitz possess vision, but he was also gifted with skill in personnel management. He dealt with the show horses, those who thought they were, and everyone else.

Nimitz arrived at Pearl Harbor on Dec. 25, 1941, shortly after having been appointed commander-in-chief of the U.S. Pacific Fleet. He was greeted by the hulls of sunken battleships that protruded from the oily waters of the harbor. Nimitz’s first job was to restore confidence in the Pacific Fleet. Then, he had to assemble a staff with whom he could work. Finally, he had to help turn the tide, using his judgment as to when to commit the remaining American forces, even as the chief of naval operations, Adm. Ernest J. King, prodded him to do more.

As Symonds notes, Nimitz and King had very different temperaments. Nimitz was reserved, solicitous, and almost stoic. King was “demanding, impatient, and occasionally frustrated” at his best and “imperious[ly]” issued orders with great frequency. Nimitz’s small “p” political skills helped him placate King and use the limited resources he had available to their best effect.

In February 1942, America’s offensive activity started with carrier raids on Japanese bases on the Wake and Marcus islands and on the Gilbert and Marshall islands. In addition, the Doolittle Raid on Japan, conducted by B-25 bombers that took off from the USS Hornet, took place in April.

During 1942 and the first half of 1943, the U.S. Navy struggled with the scarcity of its resources. In January 1942, the sinking of the oiler Neches caused the cancellation of a mission. Subsequently, the Saratoga, one of the four surviving aircraft carriers, was torpedoed and forced to repair the facilities in Puget Sound before returning to battle. As a result, when the American forces turned back the Japanese in the Coral Sea, they had only two aircraft carriers available. Of those, the Lexington was sunk and the Yorktown damaged. The Yorktown was repaired in short order at Pearl Harbor and participated in the Battle of Midway, where it was sunk. Finally, the sinking of the aircraft carrier Wasp in September 1942, combined with damage to the new Enterprise and the Saratoga, left the American forces with only one aircraft carrier for a time. By mid-1943, though, the aircraft carriers, fast battleships, and support vessels that American industry was busily producing changed the culture from one of scarcity to one of plenty.

The shortage of resources was offset by the code-breaking ability of the American station at Pearl Harbor. The code breakers successfully predicted that the Japanese would try to turn the corner of New Guinea, which led to the Battle of the Coral Sea. Although American shipping losses were greater than those of the Japanese, the Japan’s drive was blunted, and one of its aircraft carriers was damaged badly enough that it could not participate at Midway. Then, they identified and confirmed Midway as the Japanese target.

The Coral Sea and Midway battles demonstrated Nimitz’s willingness to take calculated risks. He expected his commanders to use their resources wisely. Nimitz’s order to his commanders, Adms. Frank Jack Fletcher and Raymond Spruance, written prior to the Battle of Midway, defined “the principle of calculated risk” as “the avoidance of exposure of your force … without good prospect of inflicting … greater damage to the enemy.” That, Fletcher and Spruance did.

Nimitz displayed his command judgment in other ways. He visited Guadalcanal twice, Tarawa, Kwajalein, and Saipan, flying to the last three after the battle was over to congratulate those who had done the fighting. He relieved commanders and rotated others when the strain wore them down. Nimitz successfully balanced the demands of aviators who contended that they, not “black-shoe” ship drivers, should command the aircraft carriers and their supporting squadrons.

Symonds rightly and understandably concludes, “Nimitz’s greatness lay less in his ability to do great things than in his facility to convince others that they could do great things.” He made better commanders of those around him: “In that respect, Nimitz was a force multiplier in the Pacific war, and the Allied victory in that war is his legacy.”

As a “force multiplier,” Nimitz stands in marked contrast to our present crop of politically correct military leaders who have had trouble reaching their recruitment targets.