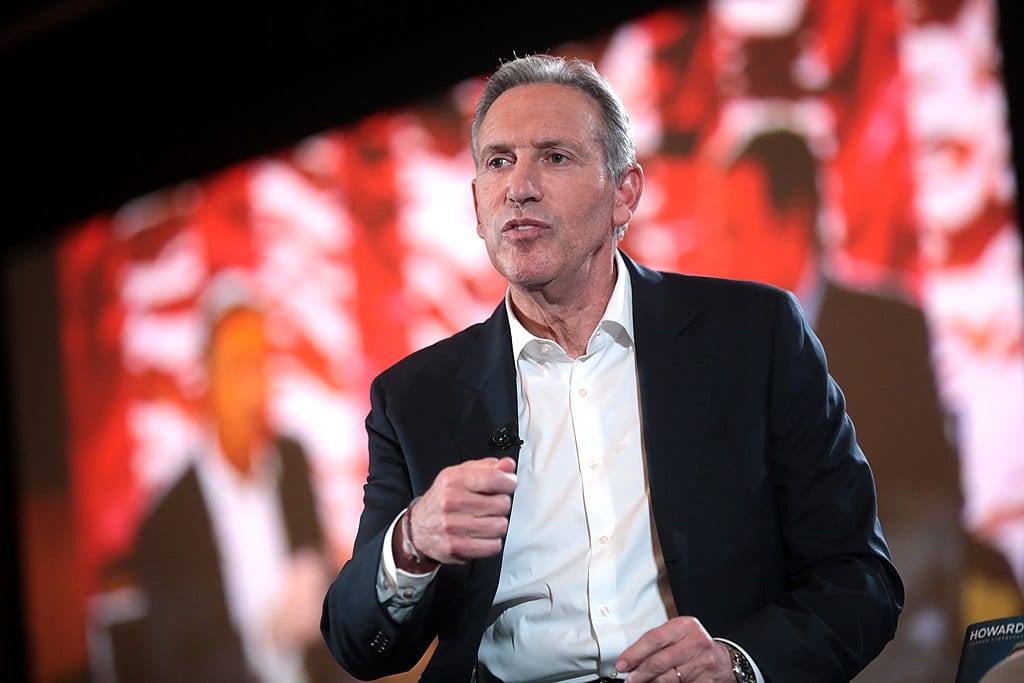 Last week was a delicious one for observers of the Ragnarok that the politics of the Left has become, particularly as it signaled the difficulties confronting some of the purveyors of the “smart set” PC culture as they attempt to cash in on their contributions to our national status quo.

Starting with Howard Schultz, the billionaire former Starbucks CEO who, having positioned his company as a leftist cultural icon by such actions as publicly backing gay marriage and imploring customers not to carry firearms in Starbucks stores (though stopping short of banning them), announced on 60 Minutes a week ago that he’ll run for president as a centrist independent.

Why an independent? After all, Schultz was a thoroughly reliable Democrat moneybag throughout his professional life. The answer, as he somewhat furtively explained, was that he knows he could never win his party’s nomination.

“It concerns me that so many voices within the Democratic Party are going so far to the left,” he lamented. “If I ran as a Democrat, I would have to say things in my heart I do not believe.”

Schultz went even further in a CNBC Squawk Box interview back in June of 2018 when he was first beginning to think of himself as a potential presidential hopeful, sounding far saner than the typical candidate within the chaotic Democrat field.

“It concerns me that so many voices within the Democratic Party are going so far to the left. I say to myself, ‘How are we going to pay for these things,’ in terms of things like single payer (and) people espousing the fact that the government is going to give everyone a job.”

“I don’t think that’s realistic,” he said. Then he added: “I think we got to get away from these falsehoods and start talking about the truth and not false promises.”

His bid, which apparently includes having hired former Obama political guru Bill Burton and former John McCain consultant Steve Schmidt, fell flat immediately. So much so that by the middle of the week Michael Moore, the supersized Leni Riefenstahl of today’s Democrat Party, was calling for a boycott of Starbucks until Schultz demurred from running.

Worse, at a signing of his campaign book From the Ground Up, Schultz was heckled by an unhinged leftist who screamed “Don’t help elect Trump, you egotistical, billionaire a–hole!“ at him. The exchange was recorded on video and shortly went viral on social media.

And then there was the treatment of Schultz from the Democrats’ newest purveyor of political wisdom, Alexandria Ocasio-Cortez, who said of his presidential bid “Why don’t people ever tell billionaires who want to run for President that they need to ‘work their way up’ or that ‘maybe they should start with city council first’?”

That came as a response to Schultz’s criticisms of AOC’s far-left policies, and it was similar to the brushback he received from fellow 2020 hopeful Elizabeth Warren, about whose draconic wealth tax Schultz had said was “ridiculous” and nothing more than a “good headline” that would never pass. Warren fired back at Schultz saying, “What’s ‘ridiculous’ is billionaires who think they can buy the presidency to keep the system rigged for themselves while opportunity slips away for everyone else. The top 0.1%, who’d pay my #UltraMillionaireTax, own about the same wealth as 90% of America. It’s time for change.”

University of Virginia political science guru Larry Sabato wasn’t impressed with Schultz’s rollout either. “The truth is the guy has announced for president, gotten an enormous amount of coverage and doesn’t appear to have support from anybody,” said Sabato. And Rolling Stone, in reviewing his book, called him a “banality supervillain,” whatever that means. “From the Ground Up is exceptionally dull, so completely devoid of ideas that it’s almost interesting. Schultz makes the Romney family cookbook read like Dante’s Inferno.”

Then there was New York magazine’s Eric Levitz, who seems so violently opposed to the idea of Howard Schultz as a presidential candidate that he actually called upon Democrats to reject Schultz and his “radical centrist ideology” — specifically decrying Schultz’s naysaying about single-payer health care and his worries over the national debt as a more urgent problem than climate change.

It was such a rude awakening for Schultz that by the end of the week word came that maybe he wasn’t so enamored with the idea of running after all. Nonsense, came the response from his camp, but clearly the anger the coastal smart set Schultz built his business on serving displayed at the idea of his running for president was a surprise. “Everybody expected blowback. He was absolutely prepared for that,” said an unnamed campaign aide. “It was the vitriol that was the surprising thing, this idea that there shouldn’t be free speech. It’s a free country.”

Perhaps it’s naive on Schultz’s part to believe his cultural coreligionists join him in thinking it’s a free country. What’s a surer bet is he’ll find out differently if he continues running, particularly as the Democrat base continues reacting to him as it has so far.

But Schultz’s ordeal was nothing compared to what happened to Virginia governor Ralph Northam over the weekend.

Remember, Northam — a Democrat, despite what lies about his party affiliation might appear on CNN chyrons — was elected over Ed Gillespie in 2017 amid a campaign wherein Northam’s party ran a mailer tying Gillespie to the white supremacist demonstrations and subsequent deadly street conflagrations in Charlottesville earlier that year, and also ran a TV ad insinuating that Gillespie and his supporters would be running down children of color in pickup trucks.

The supreme irony of that campaign, particularly given the vicious lies about Gillespie which were told in it, came back to bite Northam in spades when a page from his medical school yearbook surfaced showing what appears to be him in a photo in blackface, standing next to someone in a Ku Klux Klan costume.

Or perhaps it’s Northam under the white hood. We can’t say for sure, because after a mealy-mouthed initial response Northam is now denying he’s either person in that photo, and he’s also rejecting demands from virtually everyone in Virginia and outside of the state that he resign. For a little extra color, Northam also revealed that in the 1980s he participated in a dance contest dressed as Michael Jackson and even wore black shoe polish on his face and learned to “moonwalk” like the late King of Pop.

And in the surreal press conference where he dropped that little bomb, Northam was about to attempt to display his ability to perform the dance in question before being stopped by his appalled wife.

Not to mention it also came out that Ralph Northam’s nickname in school was “Coonman.” He says he has no idea why.

This came after what should have been a far more devastating gaffe — in which Northam was heard in a radio appearance discussing a Democrat-sponsored bill legalizing abortion all the way to term and making an almost inhuman reference to discussions between mothers and doctors as to the fate of already-born children. That exchange put the Democrat Party’s position on abortion perilously close to, if not clearly beyond, the line of supporting infanticide and therefore exploding any possibility of that party assuming moral equivalence, much less superiority, going forward.

Virginia Democrats are particularly aggrieved at the medical school yearbook photo and much less so over the infanticide comments, as the former is an affront to the party’s multicultural, identity-politics brand and the latter is, well, no big deal to them (look at the legislative atrocity the Democrats just celebrated in New York, after all). Calls for Northam’s resignation are particularly loud given that the state’s Lt. Governor is Justin Fairfax, a 39-year old African American Democrat who has a Barack Obama air about him and was backed by the former president when he won a narrow victory over Republican Jill Holtzman Vogel.

Fairfax has so far been silent about the question of Northam’s potential resignation, but he sure wasn’t quiet over the idea the Virginia Senate would honor Robert E. Lee on his 212th birthday. Seems it’s a lot easier to show outrage over the unenlightened tendencies of dead white Democrats than to do so over those of the living, apparently. Robert Byrd notwithstanding, of course.

For those who don’t wish Schultz or Northam well in their political pursuits, it’s like Christmas in February, if not perhaps an early Mardi Gras. The beauty of the Left as it eats its own — and particularly as it dines on its white guys, who after all have cynically stoked the fires of racial, ethnic and gender strife as a means of tearing apart our common culture and impinging on our free expression — is more fun than we can describe.

But one thing which does stand out as troubling is this: how on earth could Gillespie’s campaign not have found that medical school yearbook photo? That seems like an unforgivable error in opposition research — yearbook photos are among the easiest and most obvious bits of political background checking, as they reveal all kinds of potentially embarrassing information. Not finding it, and not finding out that Northam went by “Coonman” as a youngster amid a campaign where Gillespie was smeared as a homicidal racist, is pure malpractice on the part of the Republican Governors Association, which Gillespie put in charge of oppo research in that campaign.

In the future, perhaps it’s best to let the Democrats handle that bit of work for their own candidates. They seem exceptionally good at self-destruction, as this past week demonstrates.