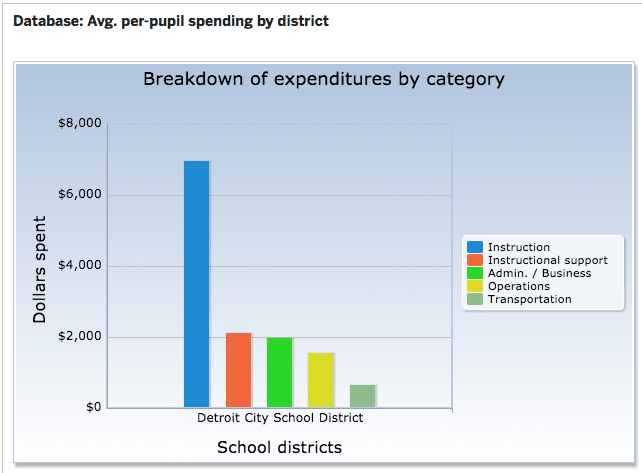 It would be easy to say that the lies about Betsy DeVos were ineffective since she was confirmed, but the confirmation vote was too close for comfort. The lies had enough heft to cause two Republican defections, Sens. Lisa Murkowski (R-NEA) and Susan Collins (R-NEA).

Typical of the lies spread about DeVos is Allie Gross’s “Out of Options” article at Vice News.

First, as all good left-wing screeds do, it pulls the reader in with an emotional story about a person who has supposedly been harmed by a conservative policy — in this case, the expansion of charter schools in Detroit. The public school closest to where parent Aliya Moore lived, Oakman Elementary, closed in 2013:

[Ms. Moore] knew Detroit’s schools weren’t great — the district had one of the lowest graduation rates in the country — but sending her girls to one of the city’s dozens of charter schools or heading out to the suburbs, as some parents did, had never crossed her mind. She didn’t have a car or a job. And she didn’t have the money to hop around Metro Detroit searching for a kindergarten for Tyliya. She needed a good, dependable school in her neighborhood. Oakman had felt like a second home, and now this man in a suit was standing in front of her saying she’d have to find a new one.

Once the reader is invested in Ms. Moore’s difficulties, he is less likely to cast a skeptical eye toward the evidence Gross presents that the “gutting of Detroit’s public schools is the result of an experiment started 23 years ago, when education reformers including Betsy DeVos, now Donald Trump’s pick to lead the Education Department, got Michigan to bet big on charters and school choice.”

But one should be skeptical. Gross’s main evidence is that the budget deficit for Detroit’s public schools grew as more students were “siphoned off” into charter schools.

For example, she writes, “Last year, for example, there were more than 100,000 school-age students living in the city; fewer than 47,000 of them attended the public schools. Take the estimated per-pupil funding figure of $7,500 per kid, and that’s nearly $400 million in revenue missing from the district.”

The problem here is that the Detroit Public Schools Community District spends $7,500 per pupil on classroom instruction. As the below figure culled from Mlive.com shows, that leaves out quite a bit of other spending:

Looking at the spending data over time reveals a picture even more devastating to the charter-schools-drained-the-resources-from-public-schools narrative. According to the conservative Michigan-based think tank the Mackinac Center, during the 2003-2004 school year, total spending per pupil in Detroit was about $14,140 with about $6,775 going for instruction. In 2014-2015, total per pupil spending was about $16,347, with about $7,695 going toward instruction.

The most likely culprits of public school closings in Detroit is the incompetent management of the Detroit Public Schools Community District and the Detroit City Government. To blame it on Betsy DeVos is misleading at best, a lie at worst.

But, then, what else do you expect from left-wing journalists?