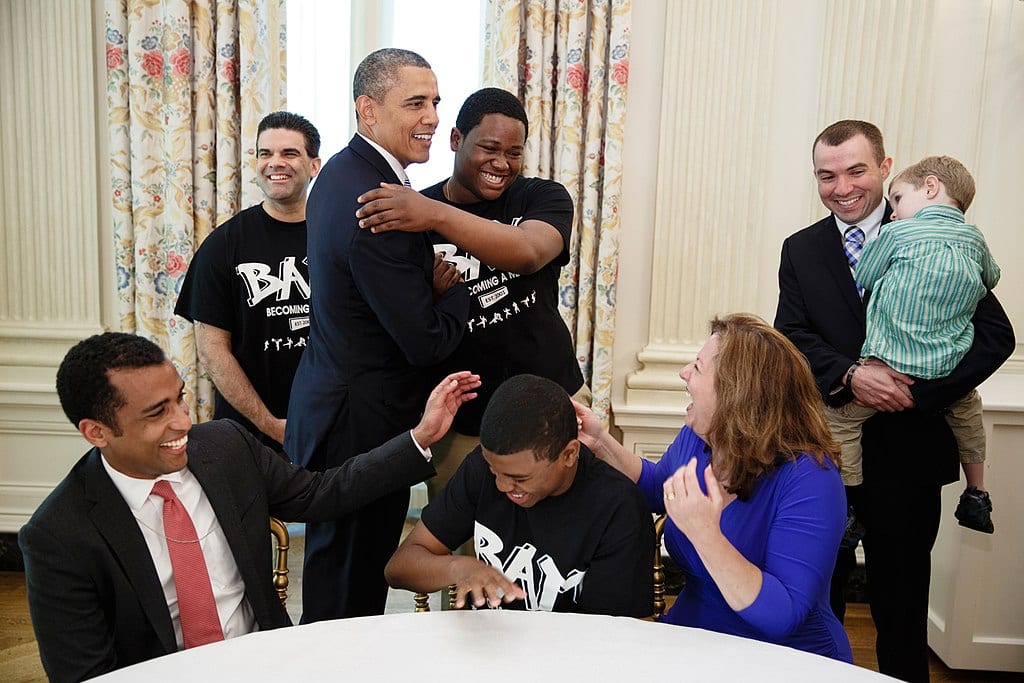 When I opened Google this Sunday, I was wished a happy Father’s Day by the mighty search engine’s anonymous powers. It was a sharp change of pace from recent Google greetings celebrating Gay Pride Month.

Gay Pride Month, if you somehow haven’t noticed, is this June. It happens to coincide with the Obergefell decision, June 26, 2015, when Supreme Court Justice Anthony Kennedy and a handful of robed liberals rendered unto themselves the ability to redefine the multi-millennial, Western, Judeo-Christian, human, Biblical, biological, natural conception of marriage between a man and a woman. Obergefell is celebrated at the website of the official Gay Pride Calendar by the unforgettable image of President Barack Obama’s White House illuminated in rainbow colors.

It’s ironic that liberals at Google and the Obama White House would, without any sense of contradiction, celebrate both things; that is, Father’s Day and Obergefell.

The irony is that by redefining marriage in America, and forcibly imposing that redefinition upon all 50 states via judicial fiat, leftists from Barack Obama to Google’s anonymous powers have pioneered a form of family that is, flatly, fatherless. Think about it: a family of two married women is a family without a father.

Well, it wasn’t always this way — not even with Barack Obama.

In a speech for Father’s Day 2008, Senator Barack Obama was emphatic: “We need fathers.” Obama came to that realization from both a personal and sociological standpoint. He barely knew his father. He also understood the devastation caused to communities (especially the African-American community) because of the crisis of fatherless families.

No question. Children raised in homes without their biological fathers have a higher likelihood of being abused (physically and sexually), dropping out of school, being incarcerated, using drugs, having a child out of wedlock, getting divorced themselves, and on and on.

Obama added: “Of all the rocks upon which we build our lives… family is the most important. And we are called to recognize and honor how critical every father is to that foundation.” If “we are honest with ourselves,” said Obama, “we’ll admit that… too many fathers” are missing — they are “missing from too many lives and too many homes.”

Of course, we all admit this. Or, at least, we all once admitted it.

Go back to Bill Clinton in the 1990s, when he and other Democrats championed a Fatherhood Initiative and the Responsible Fatherhood Project. Clinton insisted to the nation that fathers play a “vital parental role. Their profound influence on their sons and daughters — on society itself — is incalculable.”

Yep. Vital, incalculable, profound. We all know this.

Like Obama, Clinton knew this from a personal basis as well as sociological. He never knew his father, who was killed in a car wreck before Bill was born.

Leading liberal Democrats such as Daniel Patrick Moynihan not only knew this but wrote policy papers and gave speeches on it.

Kids need dads. For a while, there was a rare consensus on this point among liberals and conservatives. It was one of the few areas of common ground.

It’s one of the reasons that Father’s Day is widely heralded, even by the cultural revolutionaries at Google.

And yet, that being the case, why in the world are liberals — led by the likes of Barack Obama, President of Fundamental Transformation — militantly, aggressively, unhesitatingly advocating a form of family that is, by definition, fatherless? Why are they pioneering — and, to the contrary, bullying and suing and demonizing anyone who stands in the way of — a redefinition of marriage and family?

In fact, what the human-nature redefiners are doing is worse than fatherless families. They’re actually pushing not only for fatherless families but also for motherless families. Think about it: children of two married males find themselves in a motherless family. Indeed, the likes of Dolce and Gabbana, the “gay” Italian designers, oppose same-sex marriage for that very reason. As Dolce says emphatically, “You are born and you have a father and a mother. Or at least that’s the way it should be.” He states: “I am opposed to the idea of a child growing up with two gay parents. A child needs a mother and a father. I could not imagine my childhood without my mother. I also believe that it is cruel to take a baby away from its mother.”

Once upon a time, not very long ago, liberals openly agreed with conservatives that fathers are fundamental to families. They have scrapped that beautiful consensus in order to accommodate their ideological marriage to same-sex marriage. They’ve not only scrapped but silenced that consensus, excoriating those against same-sex marriage as “haters” and “bigots.” They have trashed what they once inherently understood at both a personal and sociological level in favor of the ideological and political.

So, when Google or Barack Obama or Bill Clinton acknowledge or wish me a happy Father’s Day, pardon me for not feeling grateful.