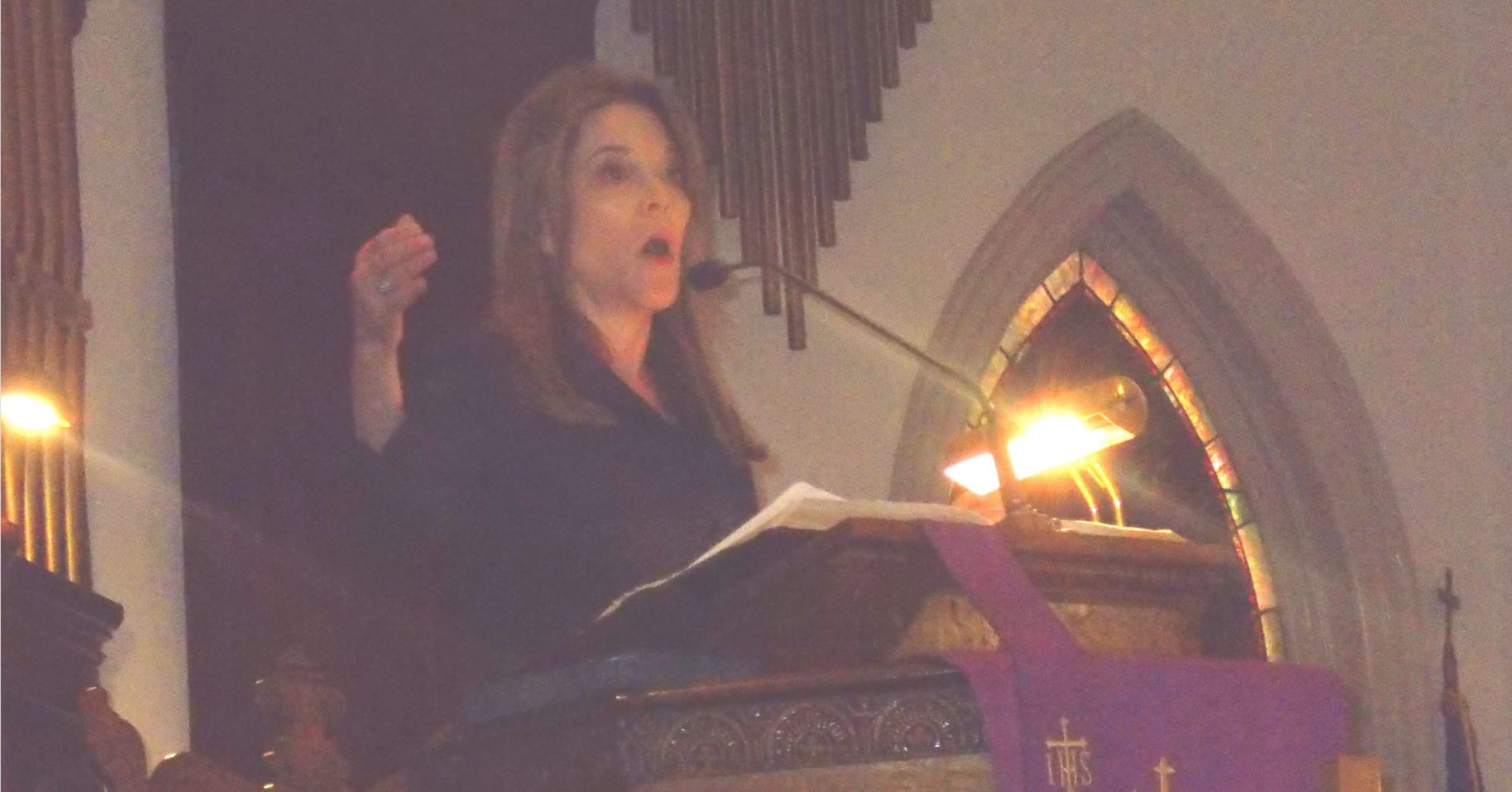 Marianne Williamson was in the pulpit at Bethel A.M.E. Church Sunday morning, and the sermon she was preaching began with a reference to Esther, the Jewish wife of Persia’s King Xerxes, who saved her people from destruction by the king’s evil minister, Haman. Williamson evoked Esther as “a vessel for the salvation of her people” who were “disadvantaged and oppressed.” Certainly this Bible-based message about deliverance resonated with the black congregation, whose historic church dates back to the 1860s. However, the woman in the pulpit, who has been called Oprah Winfrey’s “spiritual guru,” had not come to the South Carolina lowlands as an author promoting her books, but rather as a candidate for the Democratic Party’s 2020 presidential nomination.

“Being American does not only give us rights, it gives us responsibilities,” Ms. Williamson told the congregation. “This country must have a great rising up.”

For all the talk about the Religious Right’s role in Republican politics, little attention is paid to the influence among Democrats of the Religious Left, of which Ms. Williamson is a recognized leader. And if the odds against her winning her party’s 2020 presidential nomination are a million-to-one, there are nonetheless serious Democrats who believe she can achieve such a miracle. One of them is Dr. Gloria Bromell Tinubu, state director of the Williamson campaign. An experienced politician who served in the Georgia legislature before returning to her native South Carolina, Dr. Tinubu was twice the Democratic nominee for Congress in the 7th District, getting more than 100,000 votes against Republican Rep. Tom Rice in this deep “red” district. Dr. Tinubu introduced Ms. Williamson at Bethel A.M.E. by saying, “I consider her a sister,” which is about as strong an endorsement as any Democrat needs here.

The reason Democrat hopefuls like Ms. Williamson have been flocking to South Carolina the past several weeks is that the Democratic National Committee has made poll standings in the Palmetto State one of the criteria by which candidates can qualify for the first round of the party’s televised presidential debates, which begin in June. DNC Chairman Tom Perez has expressed a desire to have a wide-open primary, a response to Democrats who resent the way their party’s 2016 nomination process was stacked in favor of Hillary Clinton. Much like conservatives whose resentment of GOP Establishment meddling supplied the Tea Party with grassroots energy in 2010, Democrat activists this time around are in no mood for middle-of-the-road candidates.

Despite the fact that Joe Biden is currently the Democrat front-runner in the Real Clear Politics average of national polls, the former vice president’s chances of winning his party’s 2020 nomination aren’t very good. For one thing, Biden is old — four years older than President Trump — and for another thing, he is a white male. Democrats are now so irrevocably committed to the race-and-gender calculus of identity politics that it may be impossible for any white man ever again to win the party’s presidential nomination. Trump said last week that his “dream” would be to run next year against Biden, Vermont Sen. Bernie Sanders, or former Texas Rep. Robert Francis “Beto” O’Rourke. Was it a coincidence that Trump named three white male Democrat contenders, or does the president understand that major Democrat constituencies would be less energized if their party fails to nominate a woman or a minority in 2020? As much as all Democrats hate Trump with the heat of ten thousand suns, a contest between two old white guys wouldn’t do much to inspire enthusiasm in the “intersectional” Left. Even though polls suggest Biden has the best chance to beat Trump, grassroots Democrats aren’t exactly excited by the prospect of an elderly party hack like Biden as their nominee. Sanders is also an old white guy, and the problem with the young white guy (besides being white and male, both now synonyms for evil in the left-wing lexicon) is that O’Rourke (a) is rich and (b) often voted with Republicans during his three terms in Congress. Many readers might think that (b) shows O’Rourke is a sensible centrist who could win back some voters the Democrats lost in 2016, but if that’s what you think, you’re obviously not a Democrat primary voter. What left-wing Democrats want is not sensible centrism, but an all-out war against capitalism, of which they consider Donald Trump the incarnate symbol. The radical Left will be disappointed if the Democrats nominate any candidate more “centrist” than, say, Pol Pot.

All of which is relevant to why Democrat hopefuls like Ms. Williamson are spending time in South Carolina. To counter charges that Sanders was cheated out of the 2016 nomination because “the fix was in” for Hillary, Perez and the DNC have opened up their party’s televised debate stage to as many as 20 candidates, providing those candidates can (a) get contributions from at least 65,000 unique donors, and (b) show their seriousness by establishing campaign operations in the four states — Iowa, New Hampshire, South Carolina, and Nevada — that hold the earliest caucuses and primaries. Polls in those early states will also be a metric in the DNC’s debate considerations, but the most crucial thing for a candidate like Ms. Williamson is to clear the 65,000-donor threshold and otherwise demonstrate the requisite seriousness. That’s where having a political pro like Dr. Tinubu as her South Carolina director makes a crucial difference for Ms. Williamson. When the candidate concluded her presentation to an after-church luncheon at Bethel A.M.E. Sunday afternoon, Dr. Tinubu took the microphone and made a point of reminding attendees that even a contribution of one dollar would count toward the campaign’s 65,000 unique-donor total.

Ms. Williamson’s reference to Esther in her sermon was appropriate to the Women’s History Month theme of the occasion, but she might just as easily have invoked another biblical character: David, the young Hebrew shepherd who slew the Philistine giant with a single stone. The Goliath that Ms. Williamson intends to slay is a political system that she accuses of neglecting the suffering of children while protecting the interests of big-money corporate donors, and her rhetoric implies that it isn’t only Republican politicians who are part of that problem. The Democratic Party, she said at Sunday’s luncheon, is compromised by “subservience to its own corporate donors.” She doesn’t mince words in expressing her hatred of Trump, calling him an “authoritarian demagogue,” but she likens him to an “opportunistic infection” afflicting a patient with a “weakened immune system.” In that metaphor, anyone can perceive, Democrats must bear some responsibility for failing to protect the body politic.

Joe Biden last year expressed the wish that he could “take [Trump] behind the gym and beat the hell out of him,” but exactly what did Biden do during his decades-long tenure in Washington to prevent the circumstances that made Trump’s election possible? If the once-powerful Democratic Party has become a “weakened immune system” that couldn’t stop the Trump virus, doesn’t Biden bear some blame for the decline that happened on his watch? And it’s not as if Biden’s buddy Bill Clinton was innocent in this regard. Like Biden (and, for that matter, Bernie Sanders), Clinton has become an enormously wealthy man while ostensibly serving as a Man of the People, and perhaps someone could mention Juanita Broadrick in asking whether Clinton might have deserved the behind-the-gym beating that Biden wished on Trump.

Well, who might ask such questions in a nationally televised debate? Would any of the senators or governors seeking the 2020 Democrat nomination risk asking rude questions of their party’s front-runner? Or would it take a candidate looking for a million-to-one miracle to be bluntly honest about where the Democrats have gone wrong? Of course, I’m no political prophet — I certainly never predicted Trump could be elected after the Access Hollywood tapes went public — and it’s still too soon to know if Marianne Williamson will even qualify for a spot on the DNC debate stage, but I do know she’s fed up with the political status quo. Speaking of America’s problems, especially those afflicting impoverished children, she likened the situation to the response of a mother finding out her teenager is on drugs: “That will not be happening in our house. … This must stop now.”

If the “Three B’s” (Biden, Bernie, and Beto) are Trump’s “dream” of a 2020 opponent, Ms. Williamson might just be his worst nightmare. Like him, she’s an outsider, a non-politician without the kind of political baggage that sank Hillary Clinton. And she brings to the campaign a spiritual vibe that could connect with swing voters. “Politics should not be a pursuit disconnected from the heart,” her campaign literature proclaims. “Where fear has been harnessed for political purposes, let’s now harness the power of love.” Sure, conservative readers will roll their eyes at that kind of emotional appeal, but what about suburban “soccer moms”? What about the millions of women who’ve bought Ms. Williamson’s books or seen her many TV appearances with Oprah? What about the congregation at Bethel A.M.E. that applauded Ms. Williamson’s call for reparations for slavery?

All the same pundits who confidently predicted Trump’s defeat would say it is impossible Ms. Williamson could win the Democrats’ 2020 nomination, and that’s the really spooky thing. We are living in a world where impossible things seem to be happening with remarkable frequency, and it’s foolish to say miracles never happen. How odd was it, after all, that Ms. Williamson was speaking Sunday from the pulpit of a black church in South Carolina? Not only is she white, she’s Jewish. (To quote New York Jewish Week: “Should she win the presidency, Williamson, 66, not only would be the first woman president but the first Jewish one.”) She mentioned the Jewish celebration of Purim, which commemorates Esther’s role in saving the Jews of Persia. She didn’t mention the famous question Mordecai asked of Esther: “Who knoweth whether thou art come to the kingdom for such a time as this?” Indeed, who knows? In such a time as this, perhaps Ms. Williamson could be the miracle that saves Democrats from themselves.