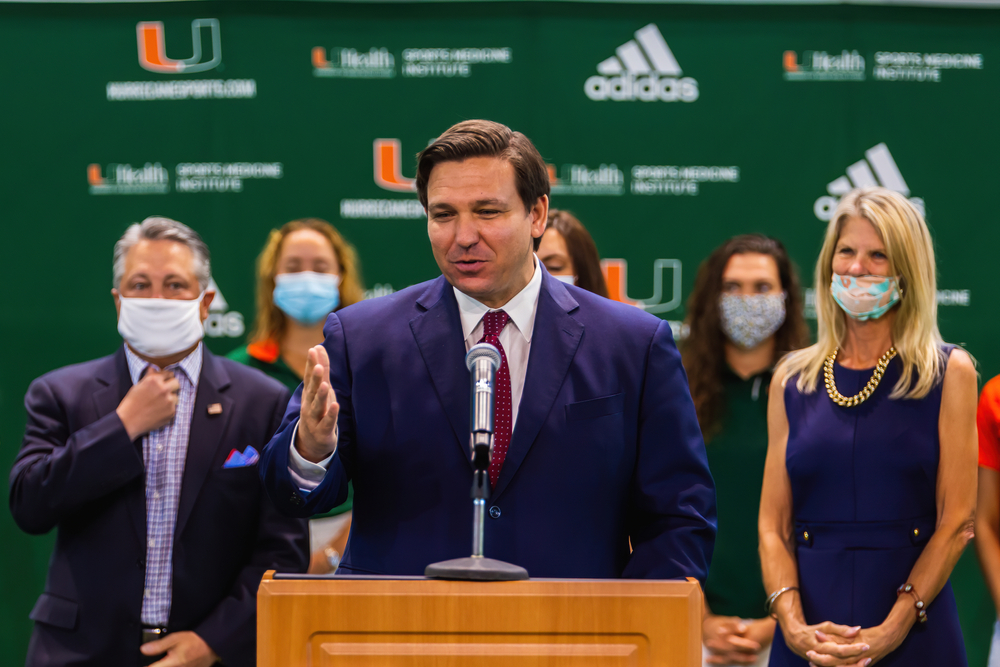 There are no sure things in American politics, but this one comes pretty close: The next GOP presidential nominee will be a Floridian.

It says here that Trump won’t run again. Yes, I’m guessing, but in the previous five cycles I’ve gone with no-no-no-yes-and-yes, which is more than Melania can say. By the time spring turns to summer, the MAGA rallies will have resumed and Trump will have laid down two markers for the national political community: first, that he (alone) can draw a large crowd, and, second, that he can lay the wood to Joe Biden.

As of this writing, Biden is highly popular in Florida, well above water in state polls at 54 for and 42 against. What does that say? Not much, in my view, other than that a genial fellow hobbling down the sidewalk tossing thousand-dollar bills at strangers can make a nice first impression. Beltway Republicans, for some reason, have been timid in their criticism of Biden and the manic leftism for which he is fronting. Trump won’t be. Along about Labor Day, it says here, when the Big Guy gets finished with Biden behind the school gym, those polls will have been turned on their head and Trump will have achieved his most important political objective — a restoration of political power. At that point, there will be no cogent argument for him to run. Which provides no guarantee, of course, that he won’t.

Rubio must bide his time, which, for Rubio, will be a Biblical test of man’s will. Rubio is quick and intellectually omnivorous and thinks (rightly) that he’s smarter than most of his colleagues. He longs to be America’s first Cuban American president. He may be one day, but not this day. He spent the winter tiptoeing through the Palm Beach tulips, first to avoid a primary from Ivanka and then to secure Trump’s endorsement for reelection. Done and done. He now has a clear path to renomination, with two challengers in the general election named Whatshisname and Whatshername. Now comes the hard part. Rubio must feign a lack of interest in 2024, even as the debate continues to rage — does the senior senator have fire in the belly or just ants in the pants?

Scott’s is the more interesting case. Across the national GOP, nobody takes him seriously. In Florida, everybody does. Floridians have seen his grit, his focus, his instinct to ignore the capillary on his straight-line path to the jugular. At 68, Scott knows that 2024 will be his only shot at the presidency, and he is doing the necessary to maximize his chances. First, he took on a job that nobody wants: He’s the new chairman of the GOP’s Senate campaign committee. Even in a normal year, that job goes begging. It entails lots of dreary afternoons dialing for dollars, lots of Friday nights in places like Boise, Bangor, and Biloxi, lots of small planes, lots of dicey weather. In this cycle, the playing field itself will be tilted against him. The GOP will be defending 20 seats with five retirements, the Democrats — with control of both Congress and the White House and the campaign leverage that goes with control — only 14 seats with no retirements.

The second thing Scott did was to redefine the job he had just accepted.

Ever since 2010, when the GOP blew at least two Senate seats by nominating unelectable candidates in winnable races, the campaign committee has tried to impose discipline on the process — by weeding out primary candidates who have no chance in the general. Not this time. Scott recently low-keyed the announcement that he will not be intervening in primaries but, rather, that he would be letting “the people” choose GOP nominees. How often does a political boss let “the people” make their own decisions? I don’t know, but the answer has to be somewhere between not often and never.

Why, you might reasonably ask, would Scott shrink the mandate of his own committee? Consider the race in Ohio. Rob Portman is retiring, the state is trending red, and the seat in normal circumstance would be a relatively easy retention. But the growing GOP field already includes a hyper-Trumper endorsed by Kellyanne Conway — Bernie Moreno. Nobody I speak to regards Moreno as a particularly strong candidate, but ask yourself this question: If you’re Rick “Last Chance” Scott, do you want to be seen muscling the Trumpiest candidate out of the Ohio race? And do you want to spend the next year playing the same role in North Carolina, Missouri, Pennsylvania, and perhaps elsewhere?

What’s in this new job for Scott? In the best scenario, he flips the Senate, spares the nation further 51-50 Kamala Harris craziness, and becomes a GOP hero. In the worst case, he gets to know all the key players in places like Boise, Bangor, and Biloxi. Rick Scott is doing the necessary.

The high flyer at this writing is DeSantis. The most recent state poll shows his favorable-unfavorable numbers at 56-42. Those are Biden-type numbers, which prompts the obvious question: How could Florida voters be simultaneously enthusiastic about America’s left-wing president and America’s most conservative governor? The answer, it seems, is that neither man has made the sale. Neither man has established himself as a defined political presence.

That’s not all that surprising. Biden’s brand new in his job. And remember how DeSantis won his in 2018. Running as Ron DeSantis, he was headed for a primary drubbing at the hand of an establishment Republican. Mid-campaign, DeSantis reintroduced himself as Trump’s Guy: a bio spot, looped endlessly on cable, showed DeSantis sprawled on a living room rug teaching his young children how to build a block wall. The DeSantis campaign caught fire, and he won the nomination by a whisker. (God then intervened and produced as the Democratic nominee an obscure mayor who managed to excite an FBI investigation into his allegedly criminal activity. DeSantis won again by a whisker.)

Next year, DeSantis will, perforce, run as Ron DeSantis, and the record is mostly good. He opened the schools before the Whitmer–Newsom crowd. (He opened the restaurants, too, which in Florida are almost as politically talismanic as the schools.) He gave shots to old people first, which millions of old voters considered to be sound public policy. He muted opposition from the teachers’ and environmental lobbies without giving away the store. He raised serious taxes only on out-of-state retailers (which in-state retailers considered to be sound public policy). He tossed red meat to the Trump pack with an “anti-riot” bill. And he kept the books roughly in balance during a public health crisis, holding unemployment to a current level of 4.7 percent. It is a thoroughly defensible record for a scandal-free, storm-free administration.

The proximate challenge for DeSantis will be to manage the transition from being Trump’s Guy to being My Own Guy. The governor cannot be seen to be hustling Trump off stage before he’s ready to leave. But then again, DeSantis can’t wait too long, either, lest he provide daylight to which Rubio or Scott might run.

Mar-a-Lago seems to be the kind of club from which you can withdraw in only one way: carefully, very carefully.

I conclude by committing an unnatural journalistic act. On March 21, 2019, I wrote the following: “Answer me this: As of this moment, who is more likely to be the Republican nominee in 2024 than the accidental governor of Florida?” I still own that question, and I pose it anew.

For those of you who for whatever reason have not yet moved to Florida, state Republicans have a message for you, and for the rest of the nation: Thanks for your input on the 2024 race, America. But we’ll take it from here.