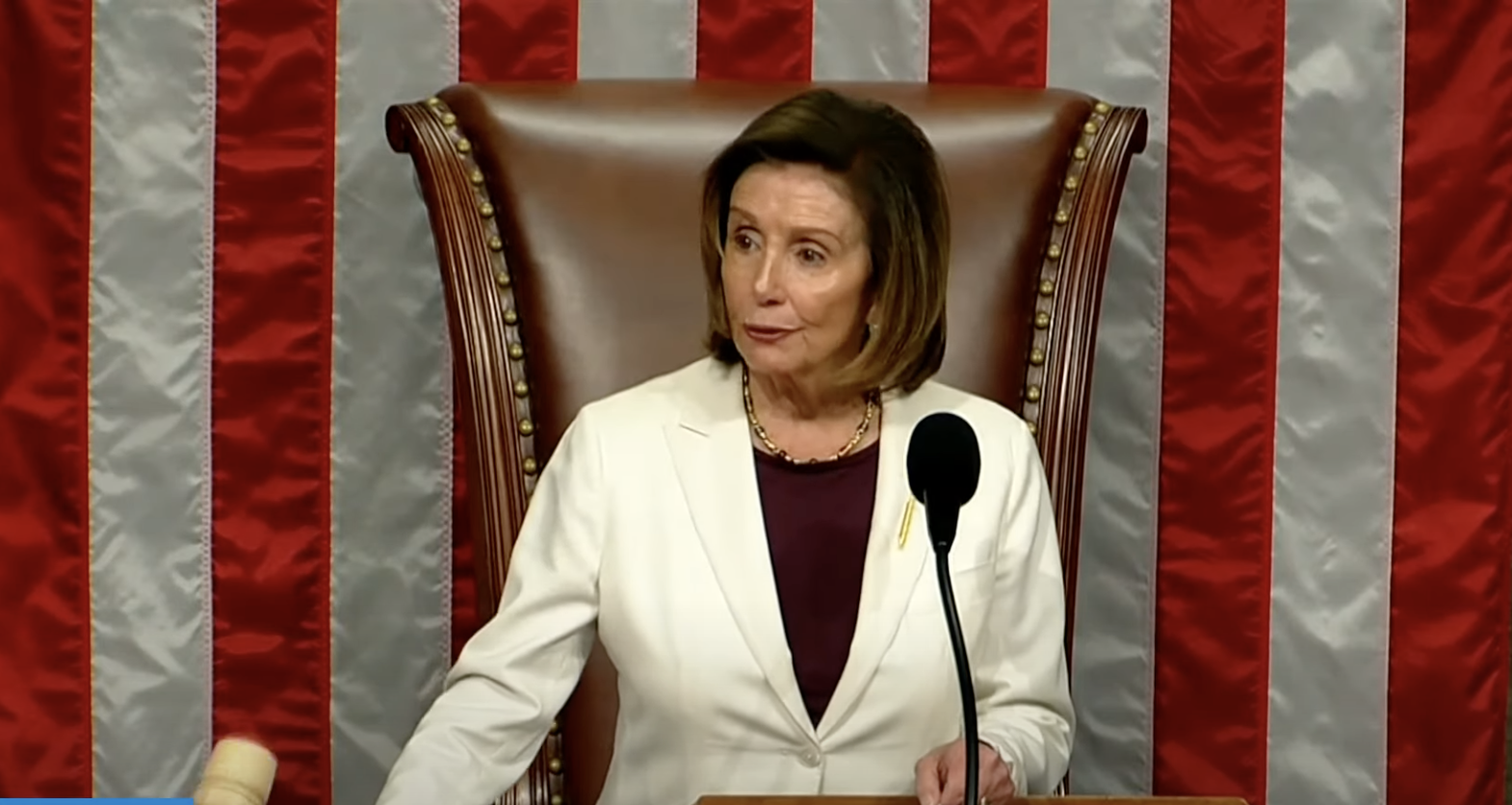 It’s Thanksgiving week, and so something this column usually does toward the end of the week now appears closer to the beginning.

Because even with things teetering on disaster on several fronts, there are lots of things to be thankful for.

And this column, and the gang here at The American Spectator, are nothing if not thankful. Our publication’s mascot is a turkey, after all!

So here are five things your author is thankful for (though they’re not quite the usual Thanksgiving fare):

You don’t need me to give a recitation of Pelosi’s near-eternity as the Democrats’ Grand House Poo-Bah; you already know that. So I won’t.

Instead, what I’ll do in giving thanks for Pelosi finally giving up the ghost as one of the worst speakers of the House this nation has ever had is what it represents.

Namely, that it’s still true in this country that failure has consequences.

Mind you, it isn’t as true as it should be. There are a whole lot of people who are spectacular, repeated failures at their jobs and who survive nonetheless. Look at Hollywood; look at the politics of New York, California, Michigan and other places; look at some of our corporate C-suites, and what you’ll see is a lot of people who abjectly suck but nonetheless are able to go on sucking without any significant personal consequences.

Pelosi was certainly one of those. When she was given the speakership following the disastrous 2006 midterm election, which presaged the effective end of Bush Republicanism as a viable governing force in America (it lingered for a time as the governing force in the GOP; see just below), the public was so quickly disgusted with the results that following the 2010 election she was bounced out of the speakership. In a saner country with a saner Democrat Party, she should have been sent packing to the back bench in preparation for the end of her political career.

But, as is the nonsense Washington meme, “she persisted.” And when a short succession of poor Republican leaders squandered the GOP’s House majority eight years later, Pelosi got another crack at the speakership.

She screwed that up, too, and is now the recipient of the ultimate karmic raspberry of having lost the gavel to, of all people, Kevin McCarthy (assuming McCarthy doesn’t manage to muck that up with his own caucus).

Pelosi has been a spectacular failure, first presiding over the onset of the Great Recession and then presiding over multiple frivolous presidential impeachments and then the first two years of the Biden presidency and the trashing of the American economy again. History will treat her exceedingly poorly.

She’s a two-time speaker who has gone 0 for 2 in unsuccessful, and short, terms in office. And of Pelosi, it’s perhaps delicious irony that her arch-nemesis Donald Trump has written the most accurate political epitaph:

The Beltway Sunday shows keep dredging up Paul Ryan, whose abandonment of the House Speaker job enabled Pelosi to seize a second crack at it after the 2018 elections. Ryan is a practitioner of the Stupid Party style of politics, and that’s one of the bigger disappointments of modern American history. There was a time when Ryan, who was never of much value with respect to cultural issues, had some interesting ideas about reforming the federal government.

We’re ultimately going to have to reconfigure Social Security so that people under 55 can get something out of the program before it completely tanks. Ryan had some interesting ideas about that. For his trouble he starred, not willingly, in Democrat ads about throwing Grandma off a cliff.

Those ads won’t age well when Grandma’s kids all go off a cliff with Social Security, not that the Democrats give a damn.

Ryan turned out to have feet of clay with respect to responding to such calumnies, a failure that the Bush Republican crowd will forever be known by.

But what’s impossible to forgive about Ryan, and what’s worth great giving of thanks that he’s no longer relevant, is his insistent moralizing as to political style.

Paul Ryan is an unreconstructed Never Trumper, though he denies it. But here’s what he has to say on the question now:

Former U.S. House Speaker Paul Ryan said on a Sunday morning news program that he is a “never-again-Trumper” and that Donald Trump is “unelectable.”

Ryan, a Republican who represented Wisconsin’s 1st Congressional District for 20 years, was speaker of the House from 2015 to 2019. He told correspondent Jonathan Karl on ABC’s “This Week with George Stephanopoulos” in the wake of Trump’s announced run that Republicans would lose if they backed Trump for president in 2024.

Ryan said he was not a “Never Trumper,” as he worked with Trump as speaker on tax reform and other issues. But he believes Trump would lose the general election for presidency in 2024.

Ryan was always a Never Trumper, though he can claim some credit for not wearing on his sleeve as Mitch McConnell has. Nonetheless, this business of “we start winning elections” is crap.

The Trumpers aren’t interested in Paul Ryan or whatever it is that he’s pushing for a “post-Trump” era. You remember the Trumpers, Paul? As in, most of the Republican Party you seem to think you’re relevant with? Go ask them what they think of you.

Like Pelosi, you failed. You were the Speaker of the House for five minutes, you accomplished scant little, you barely even made a first down in office, and now you’re sniping at the heels of the man whose influence changed the GOP forever and not in your direction. If there is to be an evolution past Trump, it will be toward somebody who’s a Trump 2.0, not the second coming of Mitt Romney’s running mate.

Paul Ryan’s influence doesn’t extend past the Sunday shows that people can barely be bothered to watch anymore. And that we can give thanks for.

3. People are beginning to recognize the Ukraine mess for what it is

There are endless denials of the fairly apparent money-laundering circle whereby U.S. aid went to Ukraine, the Ukrainians got in bed with the crooked cryptocurrency exchange FTX to offer some sort of crypto-donation scheme for their war effort, and the proprietor of FTX, a freakish little gnome named Sam Bankman-Fried whose mother runs a well-heeled Democrat PAC when she isn’t teaching law at Stanford, turned around millions of dollars in campaign donations to Democrats and establishment Republicans (but mostly to Democrats). But the public isn’t fooled — we’ve been conditioned to believe that the worst is probably true when it comes to the ruling elites in our culture, politics, and economics, and the worst is apparent with respect to FTX.

Because no sooner did the Democrat–Ukraine–FTX nexus begin to surface but Volodymyr Zelensky, the grotesquely overrated dictator in a green T-shirt who runs Ukraine, attempted to start World War III and put millions of American lives at risk.

The Ukrainians managed to shoot a few missiles into Poland, and one landed in a rural area, killing a couple of exceptionally unlucky Poles. Zelensky proceeded to blame the Russians and insisted NATO invoke Article 5 of its charter, which holds that an attack on one member is an attack on all — and Poland being a NATO member, it was time for the balloon to go up.

And then the truth came out about the origin of the offending missiles.

If anyone was still touting Zelensky as a hero for the 21st century before this debauch, that has surely dried up by now. Thank God for that. We are long past the point where we are obligated to treat this conflict between Ukraine and Russia as anything other than a sordid mess that requires resolution before it makes one or more of our cities glow in the dark as a result of lethal stupidity gone rampant.

Perhaps, if McCarthy is able to ascend to the Speaker’s chair, there might be an end to the Ukraine mess because the financial spigot ultimately runs dry. Biden certainly isn’t calibrating toward that end, but maybe his hand will be forced.

But at least a growing number of Americans recognize it’s time for the Ukraine war to end, period. And that prospect alone is reason for thanks.

The best item, the one to be most thankful for other than the banishment of Pelosi to the back bench, to come out of an unremarkable midterm performance by the GOP is that Biden and his party believe they won.

It’s a mixed blessing, at best.

After Newt Gingrich and his merry band of populist conservatives retook the House in a wave election in 1994, Bill Clinton realized he needed a major recalibration. Clinton then perfected the art of “triangulation.” in which he would surrender to Gingrich’s legislative agenda but take credit for its success. All the while, America was moving inexorably to the left based on cultural imperatives and executive orders in the political sphere, robbing Gingrich of victories which should have been his. Clinton managed to serve out two terms.

It’s unlikely Biden will serve out two terms. It’s hard to imagine his even surviving two terms, politically or otherwise.

And the fact that Biden and his party believe he’s the man for 2024 means, at least for now, that other, more viable Democrats — assuming there are any, which is not quite in evidence at present — will be left to the side.

By 2024 that won’t be a viable political stance. But the longer they cling to it, the better the chance for saving America.

It’s on Paramount+. It stars Sylvester Stallone as an aged mob capo fresh out of a 25-year stint in the joint for, well, mob stuff.

And upon his release, the Don sends him to start up a new thing down in Oklahoma.

They’re releasing an episode every Sunday. I’m two shows in and I’m hooked. You will be, too. Here’s a sample: