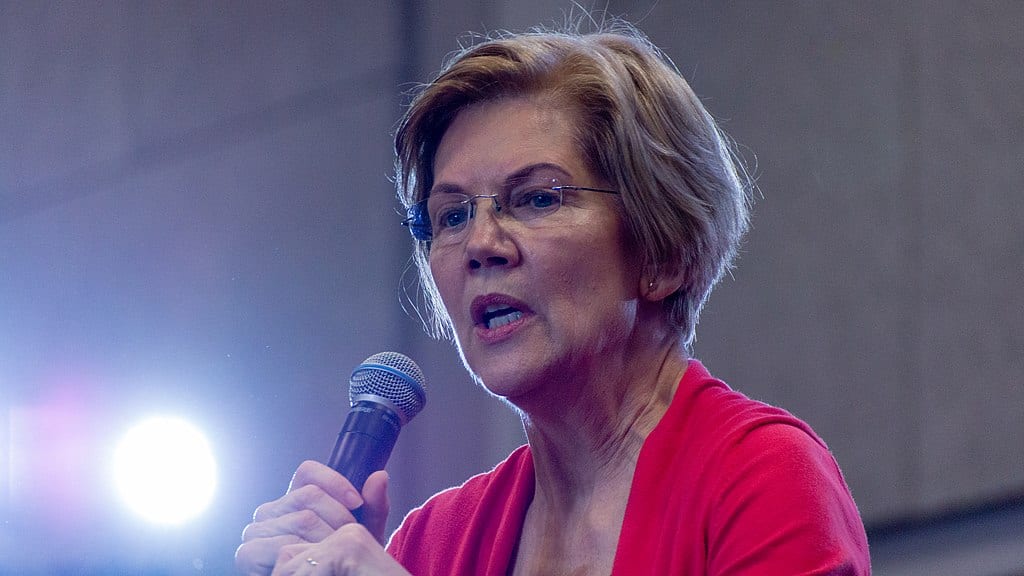 More Politics
Sign Up to receive Our Latest Updates!
Register
Hot Off
The Press
Ben Stein's Diary
My COVID Vaccine: A Lesson in Cognitive Dissonance
by Ben Stein
In Print
Retrofitting the Suburbs
by Clive Aslet
Laughing Matters
With Biden, the Summer of Love Is Back
by Itxu Díaz
Space Race
NASA’s Artemis Space Launch System Misses the Mark
by Mike Howard
Biden Watch
President Biden’s False Promise of Unity
by Doug Bandow

Elizabeth Warren announces her presidential candidacy in Lawrence, Massachusetts, on Saturday. Trips to New Hampshire and Iowa follow immediately thereafter. Already, before formally declaring her candidacy, she faces calls to drop out.

The paleface part of Elizabeth Warren once again inflicted indignities upon the Native American part of Elizabeth Warren. That .098 to 3 percentage of her DNA, seemingly suffering a Wounded Knee every few weeks at the hands of the 97 percent to 99.902 percent of her steeped in the forked-tongue white man’s ways, received unflattering coverage as the Washington Post reported this week that Warren called herself an “American Indian” when she filled out a card upon becoming a member of the Texas Bar Association in 1986.

“Warren filled out the card by hand and signed it,” the Post reports. “Dated April 1986, it is the first document to surface showing Warren making the claim in her own handwriting. Her office didn’t dispute its authenticity.”

The curious timing and placement of the information somewhat mitigated the effects of the bad publicity.

The news conveniently broke a few hours prior to the State of the Union address — the senator studiously avoided dressing in white as so many of her female House Democratic colleagues did — and a few hours after Warren released her financials showing the Hessian class warrior’s net worth amounting to between about $3 million and $8 million.

And the Post buried the lede — Annie Linskey, a Boston Globe reporter with a track record of writing flattering articles about Warren, co-wrote the piece — which first appears in paragraph eight. The ho-hum headline, “Elizabeth Warren apologizes for calling herself Native American,” masks the news that breaks within the article. NBC News obliquely spotlighted this peculiarity by headlining its article on the matter, “Elizabeth Warren keeps on apologizing for Native American controversy.”

It’s not news that Warren apologized. She did so long ago, and keeps doing so to answer questions not asked by reporters. It is news that she described herself as “American Indian” to the Texas bar. The Post buried that under a headline and paragraphs that interested exactly no one but helped Warren dump unflattering information, certain to eventually come out, on her own terms.

In revealing to conceal, Warren continues the pattern of duplicity launched more than three decades ago when she claimed minority status — and the professional perks that go with it — despite resembling an Edgar Winter-Gwyneth Paltrow love child. She lies about her lies. Her media enablers, though unable to ignore the deluge of bad news, desperately try to plug up the unpluggable holes in the dam.

“That still doesn’t mean that she gained anything from her decision to call herself a Native American on some documents,” Chris Cillizza writes at CNN.com. This seems a preposterous claim. Warren graduated from Rutgers Law School, not in the top 50 of U.S. News and World Report’s annual rankings. After examining the CVs of faculty at Harvard Law a few years back, I discovered that more than half of its professors and assistant professors received their law degrees from — where else? — Harvard Law. Outside of specialists who obtained degrees outside of the field of law, every professor and assistant professor at the school graduated from a law school within the top ten. A mere five graduated from a law school in the bottom half of the top ten. Harvard, which boasted of her as a minority faculty member, now insists that her pseudo-ethnicity played no role in her hiring. A laugh track did not accompany the avowal.

A few days before Massachusetts’s senior senator apologized again to obscure that she called herself an “American Indian” in her own handwriting, she called for the resignation of Virginia Governor Ralph Northam, who, around the same mid-1980s period that Warren wrote of her “American Indian” ethnicity, impersonated Michael Jackson in blackface. Whereas Northam’s racial masquerade hurt the feelings of minorities, Warren’s hurt them professionally. And rather than a momentary lapse in sensitivity, Warren kept up the charade for years.

Northam’s dissembling, perhaps more so than what he did as a young man, undermines his credibility to such an extent as to make him a lame duck barely a year into his tenure. Warren’s continued dishonesty, even in the manner in which she keeps apologizing in non sequitur fashion to obscure bad news from 33 years ago, similarly damages her credibility to the point where her presidential candidacy seems doomed before it launches.

If only that .098 to 3 percent of her, that part that gained her a job at Harvard Law and a recipe in Pow Wow Chow, could run for president, and that 97 to 99 percent of her that lies all the time would just go away, then maybe Warren could start her presidential run before it ends. Alas, voters evaluate the whole sum of an individual, rather than just those parts admired by Ivy League hiring committees that tend to deindividualize, prior to casting a ballot.

Long before she came to the Capitol, Elizabeth Warren went native. Her Washingtonspeak fibs told in self-serving fashion instead undermine her ultimate ambition.